The Australian Government has approved a project to extend the runway at Hobart Airport by 500m to allow for larger planes and an increased number of passengers. 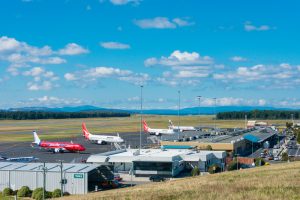 “The runway extension will enable Hobart Airport and the surrounding region to capitalise on the growth in international passengers and freight forecast for Tasmania in the coming years,” Mr Chester said.

“The approval clears the way for a 500m extension of the existing runway and the construction of associated aviation infrastructure.

“Once complete, Hobart Airport’s runway will measure over 2.75km and will be capable of handling larger aircraft with greater flight ranges than those currently serving the airport.

“The extended runway will significantly enhance Hobart Airport’s aviation capacity and allow it to cater for a greater diversity of aircraft types and higher passenger volumes.”

Minister for Tourism and International Education, and Senator for Tasmania Richard Colbeck said the approval continues the Government’s commitment to improve the Tasmanian economy following the 2013 election.

“Tourism has been recognised as a key economic super growth sector for the next decade, and this Government recognises the importance of investing in key infrastructure such as the runway extension to ensure we realise its full potential,” Mr Colbeck said.

“Increased aviation capacity is essential to meet the Tourism 2020 strategy growth targets and underneath these passenger seats is valuable freight capacity for use by Tasmania’s premium food and wine producers.

“During Australia Week in China last week, I was approached by China Eastern Airlines who specifically raised access to Hobart airport with me. I was happy to report that they would soon be able to fly direct to Hobart following the completion of the extension.

“China Eastern currently operates double daily services from Shanghai to both Melbourne and Sydney, it also flies daily into Cairns, and flies three times a week into Brisbane.

“China was Tasmania’s second largest source of international visitors in 2015, with 28,000 visitors and the potential to grow this market through direct access is immense.

“The runway extension will also provide a major boost to Hobart as a hub supporting Antarctic services. This will help cement the city’s standing as Australia’s gateway to the world’s southernmost continent.”

The approval of the Major Development Plan follows a comprehensive consultation process that attracted overwhelming support for the runway extension.