The contract for the Caulfield to Dandenong Level Crossing Removal Project, which involves the removal of nine crossings and elevating the existing line, has be awarded. 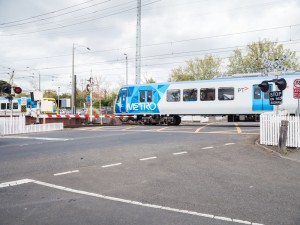 Victorian Minister for Public Transport, Jacinta Allan and Treasurer Tim Pallas announced that the contract has been awarded to an alliance including Lendlease, CPB Contractors, WSP Parsons Brinckerhoff, Aurecon and Metro Trains Melbourne.

The Victorian Government has also ordered 65 new high-capacity Metro Trains, which will create space for 11,000 extra passengers to catch the train on Melbourne’s busiest rail line.

“The project to eliminate these congested death traps is about to begin, and 2000 jobs are about to be created,” said Victorian Treasurer Tim Pallas.

“This project will deliver more room, on more trains to carry more people on Melbourne’s busiest rail line. It’s needed now, and we’re not going to waste a day – we’re going to get it done.”

The project will improve the reliability of the metropolitan, regional and freight services, meaning trains will arrive on time and more often.

By elevating the existing line, the project will transform rail into kilometres of new parks, paths and open space that will be overseen by an expert panel headed by CEO of the Royal Botanic Gardens, Tim Entwisle.

A trust fund has also been established, to ensure the new space is safe, green and cared for in the long term.

The Level Crossing Removal Authority has also released the Consultation Outcomes and Submissions Report, which summarises thousands of pieces of feedback it received from the community.

Victorian Minister for Public Transport Jacinta Allan said, “If we don’t build this project, our roads will grind to a halt and our train system will be overwhelmed.”

“Removing these crossings will relieve pressure on our roads and trains, and make communities along this line better places to live, with new parks, less traffic and more trains.”

A range of measures have been incorporated into the project as a result of this feedback, including escalators at all the new stations, more bike paths with better lighting, noise walls along the structure, and more car parking.

Work on the Caulfield to Dandenong project began at the end of April 2016, with the installation of fences and site preparations.