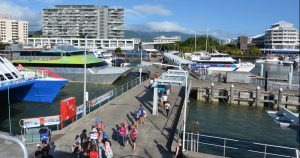 The Port of Brisbane intends to fully fund and finance the terminal, and predicts that it will attract additional expenditure increase of up to $1.3 billion over the next 20 years.

It also estimates that up to 300 jobs will be created during construction.

The signing of the process deed follows the government’s decision in February 2016 to move Port of Brisbane’s proposal from initial assessment to the detailed assessment phase of its market-led proposals framework.

The process deed sets out the government’s requirements for the detailed proposal, how the project will be assessed by government and includes key detail such as agreed milestones in the development of the proposal.

“The Port of Brisbane has already been busy preparing preliminary information as part of its detailed assessment of the cruise ship terminal but the signing of this process deed enables them to get the work underway in earnest,” Mr Pitt said.

“It allows the Port to proceed with clarity so they know exactly what the government will be seeking if the project is to be successful.

“Given the potential benefits to Queensland the cruise terminal would deliver it’s important to agree these key terms upfront.”

The proposed facility is supported by cruise ship operators which are seeking dedicated cruise facilities with deep water access for their growing number of mega cruise ships.

Mega ships are becoming a global trend and by 2020, 60 per cent of the cruise ships in Australia will be longer than 270m.

The existing cruise ship terminal at Portside Hamilton can only berth vessels up to 270m because of the narrow, shallow depth of the river and height restrictions of the Sir Leo Hielscher bridges.