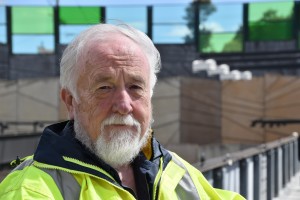 An EastLink staff member has received the Lifetime Achievement Award from ITS Australia at the 23rd World Congress on Intelligent Transport Systems (ITS).

EastLink’s Ian Oxworth, who has been with EastLink from design through to current operations, won the award.

Ian’s ITS responsibilities include:

EastLink’s Managing Director, Charles Griplas, said, “Ian continues to be responsible for all ITS systems on the 40km EastLink network, which is Melbourne’s largest toll road and one of the busiest in Australia.

“Ian is an innovator who helps EastLink deliver complex technical projects such as the current upgrade of EastLink’s tunnel ventilation to a fully automated ventilation on demand system.

“This project is one of the first of its kind in the world, and will reduce electricity usage and carbon dioxide emissions by 6,440 tonnes per annum. The adjacent community will benefit from reduced noise.

“Leading a project to upgrade all of EastLink’s roadside equipment, Ian is introducing higher resolution cameras that will further enhance the level of EastLink’s automated licence plate recognition, which is already at a relatively high level of performance compared to other toll roads in Australia.”

Working with national and state bodies, Mr Griplas is helping to develop standards for the introduction of connected and autonomous vehicles in Australia.