Building the most efficient runway system in the country 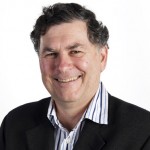 Brisbane Airport’s New Parallel Runway is the largest aviation infrastructure project currently under construction in Australia. The $1.4 billion project commenced in 2012, and with Phase 1 of the project now complete, we spoke to Project Director Paul Coughlan to gain an insight into one of the toughest engineering assignments in the country.

Brisbane Airport is Queensland’s premier gateway, with more than 22.5 million passengers using the facility in FY16. Annual passenger numbers are expected to reach more than 50 million by 2034, and to accommodate this growth, Brisbane Airport needs to increase its runway capacity.

The need for a second parallel runway was identified more than 30 years ago, and the footprint for it has appeared in Brisbane street directories for several decades.

Our current runway system has almost reached capacity for a number of hours each day, and the new runway will double the airport’s capacity – allowing Brisbane Airport Corporation to manage air travel growth for decades to come.

The NPR is the biggest aviation project under construction in Australia, and when complete will give Brisbane the most efficient runway system in the country.

The NPR will help to ensure the continued economic strength of the rapidly growing South East Queensland region, providing the essential public infrastructure needed to respond to population growth and to underpin future commercial prosperity for the community.

The new runway is the centrepiece of $3.8 billion worth of capacity-related infrastructure (including redevelopment of both the International and Domestic terminals) planned for the airport over the next decade.

It has been estimated that this investment will add billions of dollars to the region’s economy and generate tens of thousands of jobs over the next two decades.

The project delivery team has just completed the Phase 1 civil works and reclamation for the NPR, which commenced in September 2012.

Works included drainage, clearing works, adjustments to the 14/32 runway, and pumping of 11 million cubic metres of sand onto the site.

Paul Coughlan, Project Director of the NPR, said the first phase of works, which took almost four years, was focused on addressing the extremely soft ground conditions on site, and developing the surface required to withstand the weight of some of the biggest airplanes in the world.

“The very poor soils on site – we have deep alluvial channels, in excess of 30 metres, running through the site – presented significant engineering challenges, with the design of the reclamation to take out primary settlement, as well as managing ongoing differential settlement for a number of years after the runway opens,” said Mr Coughlan.

“Our geotechnical engineering consultant, Golder Associates, has many years of experience in dealing with very soft alluvial soils including at Brisbane Airport.

“We invested the time and resources in undertaking an extensive ground investigation program. By having really good knowledge of the ground that we are building on, it greatly assisted us and our design consultants to determine the optimal reclamation strategy, and in the design of the aircraft pavements and the associated runway infrastructure.”

Dealing with such soft ground conditions – described as having the consistency of toothpaste – resulted in a number of flow-on effects that required their own unique engineering solutions.

“We knew that we needed a very large dredge vessel to pump the distances required – between 5km and 8km.

“This required us to secure a pipeline corridor through a large sewerage treatment plant (off airport), as well as across the existing Brisbane Airport airfield. We also needed to make sure that the dredge could operate with minimal disruption to port operations.”

While achieving these significant engineering feats, Mr Coughlan and his team also had to ensure that construction activities didn’t disrupt airport operations, airport tenants or passengers travelling to and from the airport. Ensuring that there were no detrimental environmental impacts was also a key consideration.

“And with such a challenging project, developing the workforce to carry out the works is a significant task within itself,” added Mr Coughlan.

According to Mr Coughlan, the benefit to the broader engineering community of undertaking a project such as this, with a complex and multi-staged delivery schedule, cannot be understated.

“The knowledge that we are obtaining through designing and constructing such a significant infrastructure project is really important, not just for airport engineering, but for other projects dealing with very soft soils, such as ports,” noted Mr Coughlan.

“In terms of the airfield design, the construction of a major new runway such as Brisbane’s NPR is not a regular event across the world, and certainly not in Australia. The knowledge we are gaining with our project will be invaluable for the other runways that are being planned in the future at other airports.”

Worthy of note for future airport construction projects is the structured manner in which the Brisbane Airport Corporation (BAC) has approached the design and delivery of the new runway.

“We have developed a highly regarded reputation with government, airlines, Airservices and CASA for how well we have engaged with them to ensure that what we deliver meets the aviation industry needs going forward,” said Mr Coughlan.

“BAC also has put a lot of effort in making sure the community and stakeholders are kept informed of what we are doing and why. There are many things that we have done, and are doing, that will assist other airport authorities, both in Australia and overseas, when planning similar large infrastructure projects.” 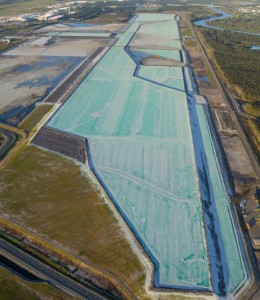 Phase 1 of the project was focused on developing the surface required to withstand the weight of some of the biggest airplanes in the world.

A critical piece of infrastructure

Brisbane Airport is a key driver in Queensland’s and the national economy, and according to Mr Coughlan, the NPR will cement the role this critical piece of national infrastructure plays.

The wider contribution Brisbane Airport made to the Australian economy in 2012/13 has been assessed at $5.3 billion, and this figure is expected to grow to $13.4 billion by 2034.

A suburb in its own right, around 420 businesses are located onsite servicing a diverse range of industries offering services such as freight and aircraft handling, warehousing, transport and communications, manufacturing, research, property and infrastructure development, education and training, recreation, tourism, accommodation, leisure and retail.

With expectation for the NPR to create a further 2,700 jobs at the peak of construction, Brisbane Airport is expected to support more than 88,000 jobs Australia wide by the year 2033/34. With passenger numbers expected to grow to around 50 million per annum by 2035, the NPR is an essential piece of infrastructure to cater for this demand.

While there’s still another four years before the NPR becomes operational, Mr Coughlan said that when it is up and running, the travelling public won’t notice too many changes.

“They will still travel to the same terminals, and their flight will be assigned to a runway depending on where they are travelling to or arriving from,” said Mr Coughlan. “If you are arriving or departing from northern or western airports, your aircraft will be on the new runway.

For the other origins and destinations, your flight will be on the existing main runway.

“Having two runways will certainly improve efficiencies for the airlines and there will be very minimal flight holdings in the air as pilots won’t need to wait for a landing slot.”

For now, the attention of Mr Coughlan and his delivery team turns to Phase 2 of the project, the pavement and airfield construction, which is now underway.

“I have a fantastic team and it has been so rewarding to see how they have faced up to the challenges so well and developed such skill sets,” said Mr Coughlan. “I have also personally enjoyed working with our many consultants, contractors, airlines and government agencies.

“Designing and building new runways is rare and I feel privileged that BAC has put its trust in me to lead our team to deliver this $1.4 billion project. As an engineer, it really brings home why I became an engineer – to take on challenges and deliver projects that will benefit this great country of ours.”

Left. Paul Coughlan. Below: Phase 1 of the project was focused on developing the surface required to withstand the weight of some of the biggest airplanes in the world.

In the next issue of Infrastructure, we’ll take a closer look at the works being undertaken during Phase 2 of the project as we interview a several Project Managers involved in bringing the project to life.