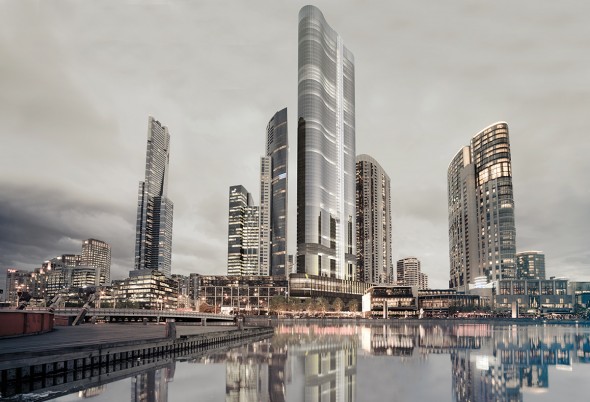 The Victorian Government has given Crown Resorts and Schiavello Group planning approval for the development of the Queensbridge Hotel Tower on Melbourne’s Southbank, which will be Australia’s tallest tower once completed.

The development, to be known as One Queensbridge, was designed by London-based architectural firm Wilkinson Eyre and will comprise a 388 room, luxury, six-star hotel and around 700 apartments, as well as a unique publicly accessible restaurant and lounge located at the top of the tower.

As a condition of the approval, Crown and its joint venture partner, Schiavello, have also agreed to invest up to $100 million in significant tourism and public realm amenities that will benefit the Southbank Precinct, including:

Victorian Premier, Daniel Andrews, said, “Four thousand jobs will be created by this project in yet another sign of confidence in Victoria as the state of momentum.

“This is a bold transformation of Melbourne’s skyline that will build on our state’s reputation as the nation’s leader for tourism.”

With Crown’s three Southbank hotels at nearly full capacity (over 90 percent occupancy), the proposed addition of this luxury hotel will also assist Melbourne to meet its future tourist accommodation demands, with Crown being able to offer over 2,000 guest rooms and suites, upon completion.

The proposed new luxury six-star hotel and tower is expected to provide a significant boost to employment, both during construction and once operational.

Victorian Minister for Planning, Richard Wynne, said, “This is a great outcome for Victoria. It’s a jobs and economic windfall for the state, and the community benefits package will be great news for this iconic part of Melbourne.”

Construction of the tower will generate an estimated 3,000 direct and indirect construction jobs, with opportunities for apprentices to learn new trades and skills over the construction period.

A key component of the design includes a new sculptural pedestrian link that will provide hotel guests with all weather access from the lobby of the new hotel to the Crown Melbourne integrated resort.

Crown Resorts Executive Vice President of Strategy and Development, Todd Nisbet, thanked the design team at Wilkinson Eyre for developing a truly iconic design for the project, which was the result of an international design competition in 2015.

“Melbourne is one of the world’s most liveable cities. We truly believe One Queensbridge will add to the liveability and vibrancy of city life in Southbank and become a signature landmark in the Melbourne skyline with international appeal,” Mr Nisbet said.

The project remains subject to financing and long form agreements between Crown and Schiavello.