Are citizen juries the answer to successful decision making? Most infrastructure decisions involve significant expenditures and have far reaching consequences. There are usually many externalities that aren’t necessarily well captured by the solutions, and there are impacts which the chosen solution doesn’t fully alleviate. These impacts become politicised because of their high-profile nature, and they often become the focus of a significant battle between “small p” and “big P” parties as people use selection to make a point.

Take the East West Link in Melbourne. That was as much about a battle between opposing political parties as it was between alternative infrastructure solutions, or indeed between differently impacted communities.

In any sort of open process, it becomes difficult to separate the conversation about the selection process from all of this noise, and for some time now, it’s been evident that the solutions involving the community which have been used over the last 20 to 40 years (such as public meetings and focus groups) have become increasingly less trusted  and less effective. 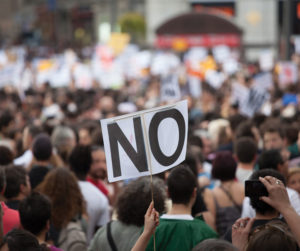 So it’s reassuring that we are seeing a move towards a process that promises to involve community representatives in an objective way, and where they feel they know and own the process – the citizens’ jury.

A citizens’ jury is a specific technique within a broader framework of deliberative democracy. Deliberative democracy  was developed in 1980 by Joseph Bessette as a way of overcoming imbalances of power and conflicts between citizens and government decision-makers.

In Australia, the approach has really started to take off in recent years. We are starting to see more examples of citizens’ juries in action and it’s interesting to consider whether they are successful – are we in fact seeing tangible, positive results from their use?

In late 2014 to 2015, the City of Melbourne used a citizens’ jury for the first time to develop a ten-year financial plan. It was hailed as a success by many, and led to the city looking at what other issues could be addressed with the method. The City of Melbourne then used the approach to deliberate on Melbourne’s future, using it to contribute to its Future Melbourne 2026 Plan.

In December 2016, Infrastructure Victoria tabled Victoria’s first ever state-wide, cross-sector infrastructure strategy for the next 30 years in parliament. Citizens’ juries played a major role in forming recommendations contained in this strategy.

“We wanted our 30-year strategy to reflect a broad community view of what is important and infrastructure affects everybody, everyday, so it’s only right that people have a say in the decisions that will impact them over the next 30 years.

“Jury members were sought through a random selection process to ensure a representative, cross section of people were involved. We asked these juries to consider the question: What should we do to meet Victoria’s infrastructure needs?”  added Mr Masson.

Each jury met for six full-day sessions over several months in order to build their understanding of the subject. In total, jurors spent around 50 hours together. The juries also interacted between sessions via online discussion forums open only to jurors. Like a court jury, they considered evidence and heard from experts before delivering a verdict.

So, was the process successful? Or is it too early to tell?

“At the end of their six sessions these reports formed an invaluable input into the draft 30-year infrastructure strategy, which was released for consultation in October 2016. Our report back to the jurors demonstrates we agreed in part or in principle with 192 of their recommendations.  We disagreed with just 13 jury recommendations,” said Mr Masson.

“The juries also helped  overcome the risk and perception that only the usual voices and the loudest voices are heard and it helped reassure the community about the value of their input and how their input is used.”

Helping Infrastructure Victoria facilitate this process was the New Democracy Foundation, and Executive Director Iain Walker agrees that it was a successful jury, citing specific ideas conceived by the jury around public housing, mental health and green space.

“This was just one of many examples where the citizens’ jury process has been successful, coming up with new ideas, or finding new ways to address problems with new approaches.”

But while Mr Walker has seen many successful cases of citizens’ juries, what about the unsuccessful?

“There have been some unsuccessful ones, and we continually refine the methodology, even after the successful projects: we’re a research foundation so we capture what we learn and share that.

“So far we have found that allowing insufficient time for the process is the number one way to break the methodology.”

Despite a few blips on the radar in terms of unsuccessful juries, Mr Walker believes he can definitively say this process is – and has been – more successful than alternative ways of engaging the community.

“Simply replacing a self-selected group with a randomly selected group will get you a more representative decision. Simply allocating 40 hours instead of one hour (town hall meeting) or three minutes (survey) gets you a more considered decision. Allowing people access to a diversity of sources will always generate a better decision than a single – often skewed – source. Few contest this.

“Most importantly, our insistence that participating jurors write every word of their own recommendations has led to an immense sense of ownership and a visible public promise that it is not ‘fixed’. Every juror knows where the words in their report came from without shaping or input from government. There is no single ‘right’ decision: we are seeking to find decisions a given community trusts and can live with: that is the key strength of the methodology which is holding up even through quite extreme project tests.”

While there are many positives, citizen juries are not a cure-all for government dysfunction, according to Nicholas Reece, Principal at Melbourne University, and he says cost is a major consideration.

“Citizen juries are not cheap – the City of Melbourne’s jury cost $150,000 and a major time commitment by council officers and others.”

According to Mr Masson, “There is no question that running a citizens’ jury is a significant responsibility and takes a number of resources. One of the most important considerations is organisational buy-in at all levels. This is where our process worked – our Executive, as well as staff, were all committed to participating in the process and seeing this as a real opportunity to hear from the community. Without this commitment, the juries would not be as effective. The integration of the jury into the overall consultation process is important and setting the question is just as important.”

It is reassuring to see that citizens’ juries are already playing a major part in addressing the challenges around infrastructure decision making.

Ultimately, citizens’ juries are a useful consultation tool because they allow everyday people to deeply engage on complex topics, such as infrastructure planning. There is strong evidence that jurors make final recommendations that they would not have made without that deep dive into the content and the opportunity to hear from a range of people on the topic – they make informed decisions.

By allowing ordinary people to influence our politics at every level, we are seeing a multitude of cases where the community is actually influencing the decisions their governments make.

And this is good news for everyone.