The Infrastructure Sustainability Council of Australia (ISCA) Chairman, David Singleton, has announced that two new casual Independent Directors have been appointed to the ISCA board. 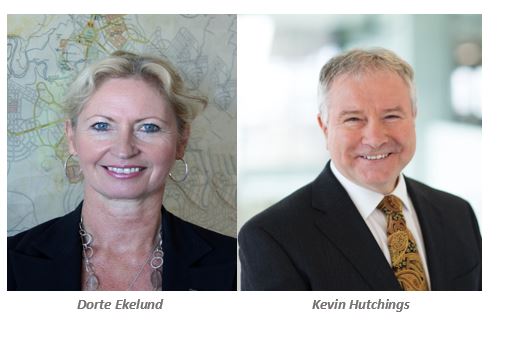 Dorte Ekelund and Kevin Hutchings joined the board on 24 April 2017. The ISCA believes the new appointments ensure that its board composition continues to appropriately reflect of the sectoral diversity of the infrastructure industry.

Mr Singleton said, “The collective experience of our new directors will add tremendous value to the continued delivery of our compelling vision.”

Dorte Ekelund is an experienced urban and regional planner who has worked at all levels of government and across various jurisdictions. She is a Fellow, PIA and holds an MBA from University of Canberra.

Ms Ekelund most recently held the position of Director-General with the ACT Environment, Planning and Sustainable Development Directorate [2013-2017] where she had responsibility for strategic land use and transport planning; development approvals; and environment, water, energy and climate change portfolios. Here, Ms Ekelund oversaw the ACT’s ambitious climate action agenda, including contractual commitments for 100 per cent renewable electricity by 2020.

In May 2017, Ms Ekelund commences as Principal Advisor – Smart Cities with SMEC where she will particularly draw upon her previous role as head of the Major Cities Unit in the Australian Government, a role that she held from 2008-2013.

Kevin Hutchings has held senior executive positions in both the petroleum industry and water industry. At Email Electronics, he was involved in the design, manufacturing and installation of both retail and wholesale technology for all major oil companies. Most recently Mr Hutchings was at South East Water, firstly as General Manager of Operations, Design and Construction, providing water and sewage services to 1.7 Million customers located in the fast-growing areas of Melbourne and the Mornington Peninsula.

During this time, Mr Hutchings also headed an alliance in conjunction with Thiess Services and Siemens for 6 years. In 2011, Mr Hutchings was appointed Managing Director of South East Water and additionally, a Director of its fully owned subsidiary, iota services.

Mr Hutchings has a passion for technology and sustainability and the benefits of blending the two. He is a graduate member of the Australian Institute of Company Directors and in 2015 completed the Stanford Executive Program at Stanford University in California.