Why is mobile GIS essential for urbanisation?

From ports and airports to rails and roads, having the right tools are essential for building clever construction and intelligent infrastructure. But when we say ‘tools’, we don’t mean the latest excavator or energy absorbing bollards, we’re talking about technology, and specifically a mobile Geographic Information System (GIS).

A GIS is a type of software that allows users to create, edit, store and share geospatial data.

Various types of GIS are widely used by a variety of industries, including government, mining, environmental, and infrastructure, to plan and record data on a map to give it locational context.

Everywhere you look, cities are expanding to accommodate swelling populations. According to the Bureau of Statistics, by 2050 Melbourne’s population will have grown to nine million people and Sydney to almost 8.5 million.

As a result, more infrastructure is required, with Perth alone recently outlining plans for a new $56 million dual carriageway and rail line, as well as a $1.2 billion public transport overhaul that’s currently underway.

Such projects could not be possible without careful planning, which is why utilising a GIS is vital for accurate execution.

GIS data collection tools, like Takor Group’s offline mobile app Mappt, have helped businesses save thousands by allowing them to see exactly where they can and can’t tunnel, dig and drill.

One costly example is Perth-based geothermal company Subthermal, who struck disaster before they began using a GIS.

Subthermal Director, John Houdalakis, said, “Before we used Mappt we hit a sewer line at another site. It was five metres down and we had to get a D9 excavator in and dig a 5x5m pit to fix the line. Expensive mistake.”

This mistake was caused by inaccurate records of the sewer lines. To be on the safe side, Subthermal drilled over 10m away from where they were told the line was estimated, but still hit it. 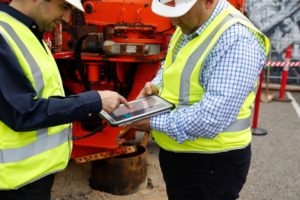 If you went back just 60 years ago, people were using pens and paper to overlay their data onto maps. Recording geospatial data was a time-consuming task that looks centuries old compared to today’s applications.

Nowadays, GIS has helped project managers save time, with readily available online maps showing data such as where Telstra lines or water pipes are located. This data can be loaded into a mobile GIS and, unlike a desktop GIS, it can be used offline in the field with smart GIS features such as:

To try these features for yourself, head to the Google Play Store for a free Mappt Pro trial. Machinery used to build skyscrapers, roads and rails are heavy and bulky, so you don’t want to be carrying around computers and numerous other devices to record your data.

This is another reason why mobile GIS are becoming increasingly popular compared to its desktop counterparts. You only need one light, compact device, and the data collection features utilise the tools already built into your phone or tablet.

For example, if you need to show a boulder in the middle of the site that was preventing construction, you would need a camera, notepad, pen, map and GPS unit.

However, If you were to use an application like Mappt, you would simply select the geotagged photo tool. This feature allows you to take a photo using your phone or tablet’s camera, then pins it onto your map using the device’s built in GPS. You can then add attributes to the photo to record more information such as the size of the boulder.

It is features like this that are paving the future of infrastructure and helping our growing cities expand in a safe and efficient way.

This partner content is brought to you by Takor. For your free trial of Mappt, visit the Google Play Store.

For a limited time Takor has slashed its prices, with licences now starting from just US $19 per month.