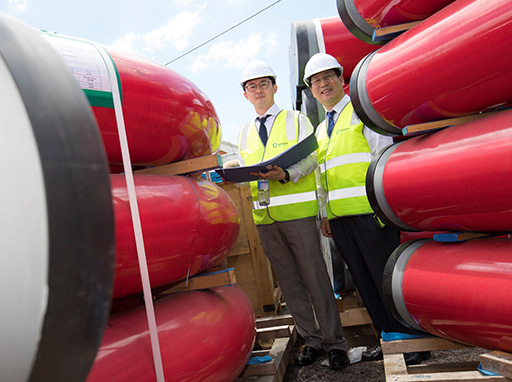 The first shipment of pipes for Australia’s first, high-tech, automated waste collection system for a CBD has arrived in Maroochydore on the Sunshine Coast in Queensland, ahead of construction on the first stage of the project.

The waste system will be installed in stages over the coming decade and will make the 53-hectare Maroochydore City Centre one of the cleanest and greenest cities in the country.

Rather than using wheelie bins, waste will be transported from commercial buildings and apartments at up to 70km/h through a 6.5km system of underground vacuum pipes located beneath Australia’s newest city centre.

Each building will include at least three waste inlets – for organic, recyclable and general waste. Waste dropped into each inlet will be stored in a sealed compartment below ground until the vacuum pump is activated at the central waste facility, usually twice each day.

The vacuum system will then consecutively collect each type of waste, sucking the waste through a system of underground pipes to the central facility, where they will be stored in sealed compactors for collection by council’s contractor. 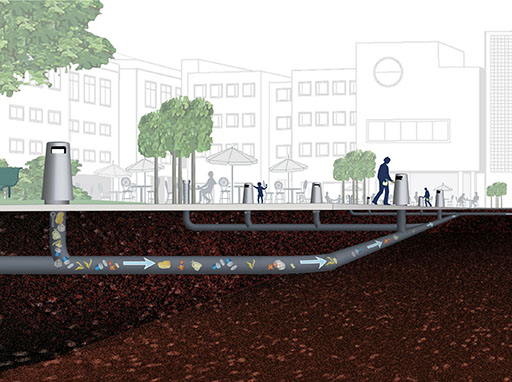 Sunshine Coast Mayor, Mark Jamieson, said he was pleased to see preparations for the first stage of construction progressing.

“This is an exciting point of the project, as we get ready to install the first pipes in a few months,” Mr Jamieson said.

“I’m very proud our Sunshine Coast is leading the charge in Australia with this innovative waste collection solution and I’m sure other cities and major urban projects will soon be following in our footsteps.

“The rubbish revolution means that city workers and residents will never have to walk past rows of wheelie bins or be woken early by noisy garbage trucks in the Maroochydore City Centre.

“Common aspects of waste collection such as odours and vermin will be avoided, and the costs of daily street cleaning will be reduced.”

Mr Jamieson said new urban developments in Stockholm, Seoul, Barcelona, London, Singapore and Beijing have all utilised the Swedish-designed Envac waste collection system – but no Australian city has done so – until now.

“As well as making our city heart more attractive, this technology has a track record of increasing recycling rates, so our natural environment will benefit too.”

SunCentral Maroochydore CEO, John Knaggs, said public areas would be serviced with their own waste inlets, enabling the new city streets to be effectively serviced by the new technology and avoiding overflowing bins.

“Automated underground waste collection is just one of the ways in which the new Maroochydore CBD will be one of the smartest cities in Australia,” Mr Knaggs said.

“Envac’s technology can be installed because we are building on an undeveloped, greenfield site within an existing urban area – and that has many other benefits.

“For instance, we are also building a high-speed fibre optic network into the city’s very foundations, which will enable us to provide ‘smart’ signage, free Wi-Fi hotspots, real-time transport information, movement sensors and smart lighting.”

The waste system will cost $21 million, which will be fully recovered from occupants of the CBD over the life of the system.