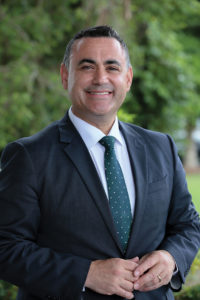 by John Barilaro, Deputy Premier of NSW and Minister for Regional NSW, Skills and Small Business

The NSW Government is spending record amounts on major infrastructure projects. But rather than put further demands on the market for skilled labour, they are ensuring this infrastructure investment will leave a skills dividend.

Construction is booming in NSW. The NSW Government is investing $73.3 billion in the next four years to 2019-20, including $41.5 billion on transport projects across regional and metro NSW.

At the same time, we are facing a nationwide shortage of skilled construction workers, and I regularly speak to business leaders who ask whether they will have the workers they need for future projects.

Our major infrastructure builds are transforming the state, including Australia’s largest road project, WestConnex, and the nation’s largest public transport project, the Sydney Metro, stretching from the north-west to the city and out to the south-west.

And the private sector has shown its confidence in NSW, evidenced by the record number of cranes springing up across the skyline.

I am determined that our once-in-a-generation infrastructure investment actually increases the pool of skilled workers, rather than just soak up all the skilled workers available. Under the program, apprentices must fill at least 20 per cent of all trade roles.

“Learning workers”, who are receiving on-the-job training to update their qualifications, must make up at least 20 per cent of the labour force.

For people living in our regions who are looking for work, there is nothing worse than hearing a fantastic new construction project announced for their area, only to see construction crews swoop in from out of town to complete the work.

As both Minister for Skills and Regional NSW, I have ensured the Infrastructure Skills Legacy Program requires contractors to identify options for local employment and training outcomes, spreading the benefits to local communities.

I have seen the Infrastructure Skills Legacy Program work well in one of its first major tests, on the Lismore Hospital Stage 3B Redevelopment.

The $180 million project is employing an average of 70 tradespeople each year, with up to 14 new apprenticeship opportunities for young people in the region.

With apprentices and trainees making up 20 per cent of the workforce, many from the local area, the upgrade will leave a legacy of skills in the Lismore region.

Women are capable at excelling in construction trades, but traditionally they have been almost entirely absent from these roles.

The Infrastructure Skills Legacy Program wants to double the number of women in non-traditional roles by setting a minimum target of two per cent of the workforce. As stereotypes are shattered, I expect we will see increasing numbers of women embarking on rewarding careers in the trades.

Our program also ensures under 25 year-olds make up at least eight per cent of the total projected workforce. This reflects the proportion of young people in the broader working population.

Aboriginal and Torres Strait Islander people, who make up three per cent of the NSW population, must be supported by at least 1.5 per cent of the total contract value under the program.

By April last year, Indigenous people were already representing about five per cent of the total number in the building and construction sector.

Training Services NSW, a government agency, has resources to help contractors develop training programs to increase employment and build capability for new and experienced workers, including Indigenous members of the community.

The NSW Government also has other strategies to tackle the skills shortage. We have ramped-up spending on Vocational Education and Training (VET), subsidising a record 550,000 places this year alone, including in key building, construction and civil courses.

It’s in the interest of construction companies, as well as the industry, to hire more apprentices and diversify the workforce. Our targets set a level playing field, saving contractors and sub-contractors from feeling they have to race to the bottom in their hiring policies.

When tendering for NSW Government contracts under this program, infrastructure business decision-makers know they can open their door to apprentices and those from more diverse backgrounds.

The Infrastructure Skills Legacy Program is strengthening the workforce and benefiting the industry and the wider community. Its positive effects will be felt for years to come.