The Victorian Government has unveiled the four potential corridor options for the North East Link, which aims to ease congestion in Melbourne’s north east and take trucks off local roads. 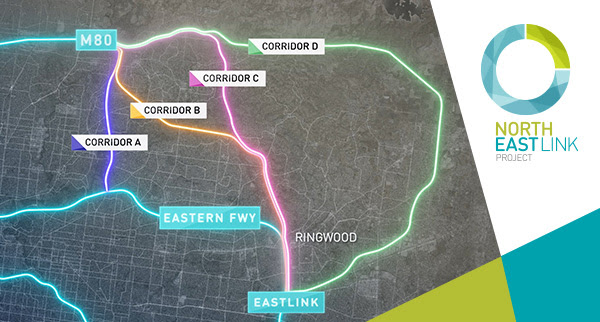 The four possible corridors have been determined through extensive works spanning the entire north-east, including geo-technical investigations, traffic modelling, environment studies, and discussions with community groups, businesses and local residents.

Each corridor has been assessed against a range of measures including key local concerns such as reducing congestion and getting trucks off residential roads, as well as the impact on urban areas and the environment.

Each of the options identified begin at the Ring Road in Greensborough and connect to either the Eastern Freeway or EastLink, and all will involve tunnels, new surface roads and bridges.

Corridor A – This 11km corridor would follow the Greensborough Highway south using existing freeway reserve and connect with the Eastern Freeway near Bulleen Road.

Corridor B – This 24km corridor would provide a direct connection from the M80 to EastLink. It would not require upgrades to the Eastern Freeway.

Corridor C – Similar to Corridor B, this 26km corridor would connect to EastLink and not require any upgrades to the Eastern Freeway.

Corridor D – This 40km corridor would connect with EastLink south of Ringwood and travel east using part of the proposed Healseville Freeway Reserve.

Premier, Daniel Andrews, said, “For decades the North East Link has been put in the too hard basket – this is the missing link Melbourne desperately needs to slash congestion and stop the rat runs in the north east.

“We said we would look at all options and that’s exactly what we’ve done. This is about making sure we get this project right.”

The Government is expected to determine the preferred corridor by the end of 2017.

The Victorian Budget 2017/18 provided the first $100 million for the North East Link to undertake design, planning and preconstruction works, ahead of contracts being signed in 2019 and construction commencing in 2020.

The Minister for Roads, Luke Donnellan, said, “For too long local roads in the north-east have become default freeways. North East Link will fix that – carrying 100,000 vehicles a day and creating 5,000 jobs.”