The Metro Tunnel will connect some of Melbourne’s busiest train lines, freeing up space in the crowded City Loop, which is currently operating at capacity. Some of the world’s best contractors have just been selected to build the tunnel, Victoria’s biggest ever public transport project.

The $11 billion Metro Tunnel Project is the biggest public transport project in Victoria’s history and is ranked a high priority on Infrastructure Australia’s Priority List.

The project includes the construction of twin nine-kilometre rail tunnels under Melbourne connecting three of the network’s busiest rail lines.

This will create capacity from day one of operation for 39,000 more passengers in peak periods, with seamless transition to the existing City Loop to create a true, international-style metro network.

Construction for the project has been divided into four key packages of work. Each will be delivered by a different consortium of expert companies through differing procurement models. The Melbourne Metro Rail Authority is the Victorian Government body responsible for overseeing the delivery of the project. 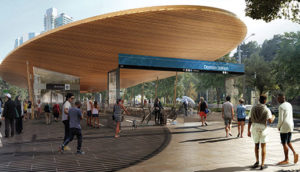 Dividing the work into packages is regarded as best practice for delivering large-scale infrastructure projects, as it reduces delay and cost risks while increasing diversity of expertise and the quality of the project.

The Tunnels and Stations package of works includes the design and construction of the twin nine-kilometre tunnels and five underground stations, as well as the provision of maintenance and other services during the operating term.

This package was procured through a Public Private Partnership and is worth up to $6 billion, making up the bulk of work for the project.

CYP was selected as the preferred bidder following an extensive competitive tender process with some of the world’s most experienced construction and tunnelling contractors. 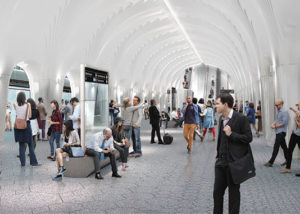 CYP brings together some of the most experienced designers, builders and project managers in the world. Its members have worked on many of the biggest international rail projects in recent history, including the Crossrail in London, Singapore Metro, Gautrain Rail Link in South Africa and Express Rail Link in Hong Kong.

As such, its proposal brought together a local and international architectural team to design new train
stations and precincts for the Metro Tunnel, which will be among the best in the world.

The Tunnels and Stations package will create more than 5,000 jobs, including apprentices, trainees and engineering cadets, and CYP will spend 88 cents in every dollar on local content, including labour.

This exceeds Victorian Industry Participation Policy’s requirement of 84 cents for this contract and as a result, CYP will drive job creation throughout the supply chain. 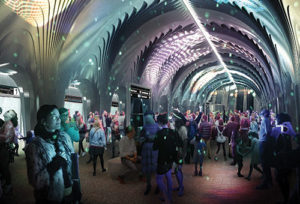 The new Arden, Parkville and Domain stations, and the entrances to the tunnels, will be built using a technique known as cut and cover. This type of construction involves using excavation equipment to dig a large trench or rectangular hole in the ground, which is then covered by a concrete deck.

Once the deck is in place, surface activity can resume as construction works continue below. Concrete panels are then used to form the various levels and internal structures, similar to the construction of the underground basements of high rise buildings.

CYP’s design for the underground station at Arden includes the creation of new public space around the station and three feature skylights that will bring natural light into the station concourse.

To reflect the precinct’s rich industrial heritage, local clay bricks will be used throughout the station and the integration of a water feature at the station entry will enhance sensory connections with the environment. 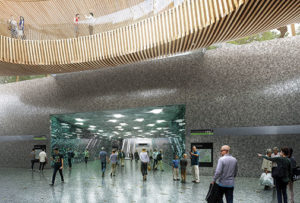 Hospital, bringing the total number of entrances to four. Changes to Barry Street and Grattan Street will see the creation of new public space, with increased tree canopies and opportunities for outdoor dining and seating.

The station at Domain will feature a floating timber canopy which will bring natural light into the station concourse and pedestrian underpass. It will create a new train-tram interchange on St Kilda Road, relieving pressure on the world’s busiest tram corridor. The Albert Road Reserve will be enlarged and landscaped to create new public open space for the local community and travellers.

Both stations within the CBD, according to CYP’s proposal, will feature a “trinocular” platform design – an underground construction technique used overseas including Haussmann-St Lazare station in Paris and the iconic Moscow Metro.

Three overlapping tunnels will be mined via road headers to create a wide open platform space with vaulted ceilings, providing clear lines of sight and easy navigation for commuters.

This construction technique is uniquely suited to the CBD’s highly variable geological conditions. As a result of the trinocular design, the platforms are widened by more than seven metres, bringing the total platform width to around 19 metres – one of the widest metro platforms in the world.

Swanston Street will remain accessible and open to trams while the Metro Tunnel’s CBD South Station is built, due to the construction of access shafts up to 11 storeys deep being dug adjacent to Swanston Street at City Square and behind the Young and Jackson Hotel, where the station entrances will be.

These shafts will transport machinery, equipment and workers underground to excavate and line the station caverns below the surface of Swanston Street. This construction approach reduces disruption at surface level and is used on tunnel projects overseas, particularly in constrained city environments. CBD South will have a direct underground connection to the Degraves Street Subway that will allow commuters to seamlessly interchange between the Metro Tunnel and City Loop services at Flinders Street Station.

New lifts will be provided to improve universal access at both ends of the Degraves Street Subway, making this connection fully accessible to all passengers. Passengers will access CBD South from eight different points – including an extra entrance at City Square. The other entrances will be at Federation Square, the Degraves Street Subway, Flinders Street, Swanston Street, Cocker Alley and Scott Alley.

The station design at CBD North will have a direct underground connection to link the station with the Melbourne Central concourse, providing a seamless connection between the Metro Tunnel and City Loop services.

Literature Lane will be extended to connect Little La Trobe Street with La Trobe Street, and passengers will be able to access the underground station from this new network of laneways.

The station entry at Franklin Street is designed with an accessible roof, creating a new public space for passengers and the students who attend the adjacent RMIT University.

Financial close and contract award for this package is expected later this year.