Outstanding achievers recognised by the ARA Individuals and organisations from across the Australasian rail industry were awarded for their outstanding achievements and innovations in rail at the recent Australasian Rail Industry Awards Gala Dinner.

Over 400 representatives from various sectors of the rail industry attended the sold out dinner to acknowledge the contributions of the twelve category winners.

The award categories and winners are as follows: 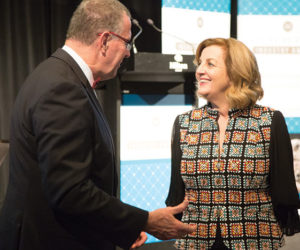 ARA Chief Executive Officer Danny Broad congratulated all of the winners for their outstanding achievements and contributions to the rail industry.

“It was exceptional to see so many talented individuals and committed companies within the rail sector awarded for their excellence, passion and dedication to the rail industry,” said Mr Broad.

“Included amongst the twelve award recipients was Brookfield Rail, awarded for the Workforce Diversity Award for their significant impact on enhancing diversity in its workforce across the past decade, including their achievements in addressing workforce gender imbalance and their approach to gender pay parity to create a greater workplace for all rail workers.

“The final award for the evening, the Career Achievement Award, recognised Ben Lombardo for his contribution as a leading pioneer and innovator in the Australian rail industry since the early 1980s, when he took over the leadership of the Speno business in Australia, driving key value add technology development, innovation and the introduction of specialised maintenance technologies into the Australian rail maintenance industry.”

Proceeds from the Australasian Rail Industry Awards go towards the TrackSAFE Foundation, a registered Harm Prevention Charity established by the industry to endeavour to reduce near collisions, injuries and fatalities on the rail network resulting from suicide and reckless behaviour.