Improving the quality of roadside safety barrier installation and maintenance It has been acknowledged for some time now that the installation of roadside safety barriers in Australia could be considerably improved to provide better outcomes for road users. To correct this situation, a number of members of the road safety industry in Australia have come together to establish a scheme that will standardise the training of all personnel involved in the installation of roadside safety barriers across Australia, and achieve optimal safety outcomes for all road users.

In 2011, VicRoads was approached by a number of barrier installation companies and product suppliers with serious concerns regarding practices the industry was engaging in that were likely to compromise the performance of safety hardware.

VicRoads began investigating work practices in 2012, and over a 12-month period, VicRoads randomly inspected a number of routes that received large quantities of permanent barriers. By the end of the 12 months, VicRoads had seen considerable evidence to realise the concerns raised were valid and worth taking action on.

Typically, hardware was not being installed in accordance with both VicRoads’ specification
requirements and the licensed product suppliers’ requirements.

The investment made by all stakeholders to develop, improve, and to receive acceptance by the respective road authority for any new road safety hardware device is significant. But despite such an investment of effort, there is little or no process or governance around who can install these devices, and limited understanding by the industry on how to specifically design barriers using the systems.

This is the critical missing link in this entire process to realising the full potential of our investment in road safety and saving lives.

Following the investigations from VicRoads, in 2013, Roads and Maritime Services sponsored an industry forum in Parramatta, convened by the Austroads Safety Barrier Assessment Panel (ASBAP). The forum was well attended by 66 stakeholders, all concerned with manufacturing, supplying, hiring, renting, installing and maintaining safety barriers in Australia and New Zealand.

There was overwhelming support at the forum for improvement to the industry.

Preference was expressed for a national system that not only ensured conformance across states, but created uniform standards and a level playing field for both construction and maintenance across Australia and New Zealand.

The industry and road authorities felt the creation and adoption of a national training and accreditation scheme, not only for the installers, but for designers, engineers, surveillance personnel, and others involved in deploying the correct safety hardware at the right location, constructed in accordance with standards, was paramount.

In response to this need to nationalise and standardise the safety barrier installation industry, a Working Party (WP) was formed by ASBAP from volunteers at the forum representing the industry and road authorities.

By November 2013, the WP had concluded that to save reinventing the wheel, Australia may benefit from adopting an existing national scheme for safety industry barrier training and accreditation.

It was noted that the UK has the only culturally similar national scheme in an English language framework; and that this solution for industry training and accreditation was effective and responsive to changes in product, standards, laws and regulations.

It was also agreed that in order to roll out a similar scheme in Australia, the WP would benefit from the assistance of the administrator of this scheme, Lantra Awards. 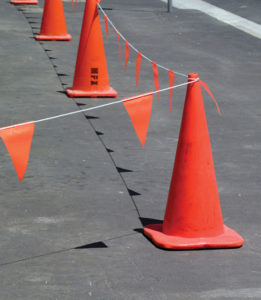 The UK standard was developed in the 1980s to harmonise differing UK county technical standards into a single national standard for training and accreditation in alignment with quality assurance and quality management scheme (QMS) standards.

A sector scheme is a bespoke QMS for organisations working on the UK road network, designed to ensure a properly trained and competent workforce in the UK highways industry.

The sector schemes are based on the ISO 9001:2008 standards, but do not duplicate them. Rather, they interpret them specifically for highway maintenance activities.

In the UK there are currently 31 sector schemes, with 14 administrative bodies supporting these schemes.

The scheme applies to all aspects of road safety barrier systems made from parts manufactured off site, for example, the design, the installation, the audit, the maintenance, and the repair of a safety barrier. This sector scheme has been successfully organised and run by Lantra Awards for almost 30 years.

Since operation commenced, sector scheme 2B has offered considerable benefits for road authorities, installation companies and the general public.

Adapting the scheme down under

Once it was established that the Austroads WP would benefit from the expertise of Lantra Awards, conversations between the two groups began early in 2014.

After a number of meetings between the two parties, both over Skype, in the UK and in Australia, Lantra Awards put a Training and Accreditation Proposal to Austroads early in 2016.

In July 2016, representatives from Lantra Awards visited stakeholders in Auckland, Melbourne, Brisbane and Sydney, presenting their proposal. In November 2016, Austroads offered Lantra Awards a contract to develop scheme 2B into a workable scheme for use in Australia and New Zealand.

The plan is to implement the scheme in Australia and New Zealand as an independent, quality-assured training regime.

All installers and labourers would undertake a one day foundation barrier course to complement, rather than duplicate the existing qualifications available to industry employees.

Installers would then be required to undertake a two day general installation course, where they would learn the theory behind safer roadside barrier installation.

Product proprietors would also develop product-specific training courses to a given template, running over the course of a day, for any installers using their particular products.

All installers would be required to complete an online logbook confirming their practical experience, and independent assessment of the competence of installers in the workplace would take place regularly.

Following the signing of the contract in November 2016, the two parties are now moving towards implementing this scheme in Australia and New Zealand.

It is expected that the timeline to establish and begin teaching the courses outlined above will take approximately six to twelve months.

It is expected that the transition period, during which everyone is trained in the relevant courses, will be approximately two years.

The initial contract period between Austroads and Lantra is a minimum of eight years. This is the foundation period which will enable the scheme to be established, and allow for time to assess candidates with basic training over one five-year period.

Apart from the basic training course, it is expected that during this period some advanced courses will be introduced and some product specific courses will be offered to enable the industry to develop talent and meet the expected demand for continuous personnel development.