Twice a year, the RLB Crane Index measures crane activity as an indicator of construction sector health across Australia. In this article, we take a look at where cranes could be spotted during the second quarter of 2017, and what this can tell us about the industry.

Consulting firm Rider Levett Bucknall (RLB) first tasked its Oceania Research & Development and communication teams with counting cranes in late 2012, based on the theory that the number of cranes in the sky correlated with levels of overall construction activity.

Since then, the RLB Crane Index has been released twice a year, with the second quarter (Q2) 2017 index being the tenth edition.

Each edition, crane numbers across Australian cities are indexed against those of the base period, Q3 of 2013, which were indexed to a value of 100, and compared to those of preceding periods to provide a city-by-city measure of changes in crane activity over time.

The results of the most recent RLB Crane Index closely reflect general infrastructure and construction trends across the country.

While there has been a slight decrease in crane numbers since the most recent previous edition of the index in Q3 2016, with Australia’s total number of cranes onsite in key cities dropping from 666 to 654, these figures are still indicative of a significant increase in construction activity over the past five years.

Where the action is 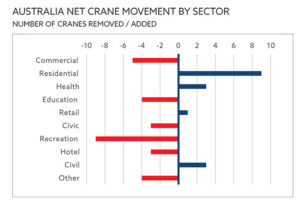 While crane numbers decreased over the Q3 2016–Q2 2017 period in most cities, Sydney and Melbourne saw significant increases in crane activity.

This is representative of more general changes in economic activity in recent years, with New South Wales and Victoria leading the charge, while Western Australia, Queensland, and the Northern Territory are feeling the crunch post-construction phase of the mining boom.

Fuelled by rising house prices, the residential sector dominates when it comes to crane deployment.
The 548 cranes working on residential developments across Australia by the end of the assessment period made up around 84 per cent of total crane activity.

Overall, Australia’s residential sector saw a net gain of nine cranes since the last index. The only other sectors to show growth in crane numbers were the health, retail, and civil sectors.

In addition to being the only cities that saw crane numbers rise, Sydney and Melbourne host the majority of Australia’s active cranes, with 51.1 per cent and 22.3 per cent respectively.

Sydney continues to be Australia’s crane hotspot, with a ten per cent increase in cranes since the previous count.

From an index value of 332 in the previous edition, the index has grown to a value of 363. This represents 334 individual cranes on the skyline within and around Sydney, up from 305 in Q3 2016.

During the index period, Sydney saw 147 cranes erected on new projects and 118 removed for projects completed or nearing completion.

The increase in crane numbers reflects growth in the amount of construction works being undertaken within New South Wales, which grew by 13 per cent overall over 2016, with residential activity up by 21 per cent and non-residential up by five per cent (Australian Bureau of Statistics).

Construction activity is concentrated along the main northern, western and southern corridors of Sydney. Of all the cranes that can be spotted in Sydney, 87.4 per cent (or 292 individual cranes) are deployed on residential developments.

Since the last report, Sydney has added 128 cranes within the sector and 94 have been removed.

Another point of difference is that unlike other Australian cities where crane activity clusters closer to the city centre, many cranes in Sydney are located in the suburbs. 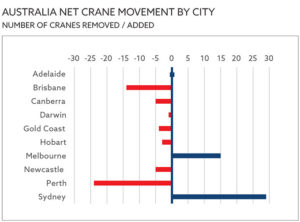 Melbourne is Australia’s second hub of crane activity, and saw an eight per cent increase in its RLB Crane Index over the assessment period, reaching an almost record high of 225 (up from 208).

Crane numbers tell a similar story to construction work figures for Victoria, which were up six per cent in 2016. Increases in construction activity are largely being driven by residential work, which increased by ten per cent while non-residential work decreased eight per cent.

Residential sector construction projects account for 83.6 per cent of all cranes deployed in Melbourne. This represents a total of 122 cranes, up from 109.

Meanwhile nine cranes (6.2 per cent) are deployed on projects in the commercial sector, health and education sectors have four (or 2.7 per cent) each, hotels have three (2.1 per cent), and retail and civic have two (or 1.4 per cent) each.

Outside of Melbourne and Sydney, Brisbane currently has the most cranes erected on construction projects at 12.4 per cent of total cranes.

This is despite the city seeing a drop in crane numbers from 95 to 81 since the previous index (correlating to an index of 213, down from 250 at Q3 2016). The vast majority of cranes in Brisbane, at 72 (or 88.9 per cent) are servicing residential projects. Smaller numbers are active on commercial or other projects.

The Gold Coast boasts 30 cranes (or 4.6 per cent of total cranes), down from 34 at the time of the previous count. This decrease was largely the result of seven cranes being removed from the Commonwealth Village project. Twenty-eight (or 93.3 per cent) of the cranes are working on residential developments, with the rest working in the hotel sector. 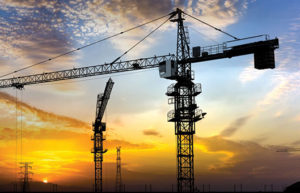 Crane numbers in Adelaide remained unchanged since the previous index, with 15 cranes deployed across the city (2.3 per cent of the total active cranes counted across Australia). Adelaide’s cranes are deployed primarily on health and residential projects (seven cranes, or 46.7 per cent each), with the one remaining crane working on an education sector project.

In Canberra, eleven cranes commenced on projects and 16 cranes were removed from sites since the last count. Total cranes in Canberra now number 19 (2.9 per cent of total cranes), down from 24. The residential sector still dominates, accounting for 14 cranes (or 73.7 per cent).

Commercial, education, and retail projects each had one crane, and two cranes were working on projects fitting into the ‘other’ category.

Of Australia’s remaining active cranes, 24 (or 3.7 per cent) are working on projects in Perth.

Perth’s RLB Crane Index fell by 50 per cent to 65, due to the completion of 16 construction projects resulting in total crane numbers declining by 24 cranes.

This is reflected in the 2016 Construction Work Done numbers. The ABS reported that Western Australia’s work done for the 2016 calendar year fell by 34 per cent.

Crane numbers in Newcastle experienced a similar decline. Newcastle’s RLB Crane Index fell from a high of 113 (for the last two editions of the index) to 50, a decrease of 55% per cent.

Four cranes now dot the skyline around Newcastle, down from nine, all of which are sited on residential projects. Two new cranes were erected and seven removed during the assessment period.

Only one crane was operating in Hobart by the end of the assessment period (down from four). This crane was deployed on a retail sector project. No cranes were operating on developments within Darwin.

The RLB Crane Index provides a number of interesting insights into construction sector trends across Australian cities, in regards to both project types and locations.

While construction activity may have declined overall due to completion of large construction projects in a number of cities, causing a slight decrease in crane numbers across Australia, residential sector projects, specially in Sydney and Melbourne, are significant growth areas.

Additionally, total Australian crane activity has more than doubled since the 2013 baseline. For a quick way to assess construction industry health in your city, it turns out it pays to keep an eye on the sky.