New vision of our urban future A Victorian Council faced with rapid growth is embracing new technologies to deal with the challenges that come with a booming population.

Wyndham City Council, in Melbourne’s outer west, has employed holographic mixed technology to provide stakeholders with a first-hand three- dimensional vision of what the future holds for the city.

Dubbed WynLens, the headsets use Microsoft Hololens technology to transform how the Council presents and uses city data.

With the latest Census data showing Wyndham is the fastest growing municipality in Victoria, Project Director Adam Mowlam, said the Council was faced with unique challenges. With the population growing at such a rapid rate, it’s important to find innovative and fresh ways to deal with the challenges.

“Mixed reality is used to firstly present a three-dimensional vision of our future city, and secondly, lay the foundation for a revolutionary decision making tool.

“This brings abstract and technical ideas to life, making themes and issues easier to understand for a wide range of stakeholders.

“In a first for any government anywhere in the world, urban planners and economists at Wyndham City use this technology to understand planned developments and for investment attraction purposes.” 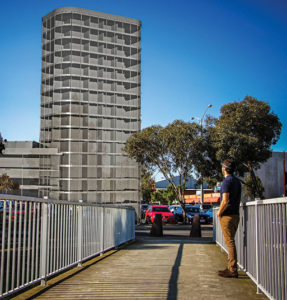 WynLens uses both aerial and Google Map style base maps to present a model of the city that can be zoomed in and out, displaying three- dimensional proposed buildings with information.

WynLens also has the ability to toggle data layers, much like a geographic information system.

Dr Mowlam said the traditional approach of governments – presenting two-dimensional data through tables, spreadsheets and charts – does not always provide the insight that stakeholders and investors require.

“Traditional approaches provide very limited information to decision makers, and citizens often struggle to interpret what is being presented to them,” Dr Mowlam said.

“Research has shown that the visualisation of three-dimensional form taps into a human cognitive process that we are more significantly capable of understanding meanings more quickly and precisely.”

Dr Mowlam said the tool is now at the point where it will expand to the next stage, ready for public sector-wide adoption.

“This project stage will significantly expand our capabilities. Cloud hosted data will be streamed to the WynLens platform, allowing stakeholders to visualise both static and live datasets, such as traffic, underground assets and air quality,” Dr Mowlam said.

“Our organisation is committed to advancing urban innovation to revitalise our city, and this includes bringing local government, other tiers of government, business, universities and leaders together so we can all work collaboratively and approach large city-wide problems innovatively.”

The creation of the holographic mixed-reality model uses drone imagery, 3D modelling, 3D visual design and a range of geospatial tools. The project was incredibly complex – every step was an adventure into the unknown and required agile thinking and entrepreneurial spirit.

One of the huge benefits of mixed reality is collaboration. The project team has enabled WynLens to be operated by a host to control the holograms, however this is difficult in large spaces due to the time required to anchor the project space in the real world.

The team is currently establishing Spectator View, which allows an audience to see a 2D representation of the world the WynLens users are seeing.

The Council last year created a portfolio dedicated to the Smart City space, with a focus on exploring and embracing new and emerging technologies to change the way the city operates.

Councillor Aaron An, who holds the Smart City portfolio, said new technologies develop at an exponential speed, and a key objective of his portfolio was to identify and deploy new technologies that have the ability to connect, engage and inform residents.

“Smart Cities are driven by citizens who demand better services, and our job at Wyndham City Council is to facilitate that interaction,” Cr An said. 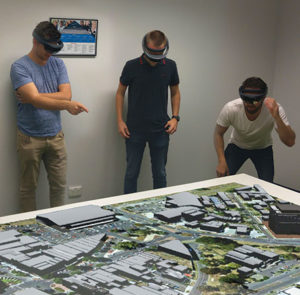 “This technology has endless opportunities when it comes to engaging with citizens, and we look forward to rolling it out to consult with our community on planned developments, and even use it as an education tool.

“We are changing the way we work, engage with citizens and other stakeholders, how we partner with other organisations across the public, private and voluntary sectors, and the way we respond to future challenges.

“Smart technology like WynLens helps us to not only manage infrastructure and resource consumption better, but also engage more effectively with our residents.”

Limitless in possibility, WynLens was initially used to provide an improved visualisation of the urban environment, with a particular focus on planning content including more than 30 current development proposals, ranging between three and 20 storeys across the Werribee City Centre.

The Council’s vision for the four sites, in a public-private partnership, is to revitalise the town by creating a multi-storey carpark, 300 residential apartments, 5,000 square metres of office space, and retail and dining outlets.

The plans also include the construction of 100 serviced apartments, a childcare centre, and a community learning hub.

Through a competitive process, Wyndham City selected The Burbank Group and The Pelligra Group as the developers to transform the sites.

Using known parameters, including cadastral boundaries, planning zone height controls and proposed building designs, a three-dimensional digital representations of these buildings can be produced on site.

“It helped us to understand the built environment, and evaluates scenic beauty, anticipate changes in views, and integrate visual aspects during the process. It also, of course, saves time and costs in having renders drawn up for every project,” Cr An said.

The project has already received a huge positive response in the sector, having won the prestigious National Award for Excellence in Local Government earlier this year.

Upon presenting the Council with the award, Fiona Nash, the Federal Minister for Local Government and Territories, described the project as “extraordinary”, acknowledging its potential to be rolled out across the country.

“In developing WynLens, Wyndham City has succeeded in employing cutting-edge technology to improve its local community’s understanding of planning and development proposals.”

For government agencies like Wyndham City, the ability to simulate future scenarios and mapping of IoT sensors across different city systems through holographic representations is the next stage of computing and fundamental to future cities.