Building a bridge with a house slab MidCoast Council recently adopted an innovative approach to replacing an existing river crossing along one of its rural roads, utilising residential house slab technology – also known as waffle pods – in what is believed to be the first time the system has ever been used to create an insitu concrete box culvert. While the end result appears deceptively simple, it meets many of the requirements for council works, being cost effective, fit for purpose and environmentally friendly and providing an improved level of service to the residents who use the road.

The crossing on Belbora Creek Road, known as Causeway #1, was originally a concrete causeway, with a small concrete pipe installed adjacent to the southern shore.

After the neighbouring Gloucester Council upgraded other causeways along Belbora Creek Road users reported that Causeway #1 had become a dangerous and substandard piece of infrastructure.

Preliminary investigations into the existing crossing revealed that the causeway consisted of three or four different generations of concrete slabs bounded by kerb logs poured at different levels.

The standard upgrade of a causeway is to rip it out, remove the existing causeway, install concrete box culverts at the bed level and reinstate the causeway slab over the top of the box culverts which effectively lowers the upstream impoundment to bed level.

In addition, Council construction crews were extremely wary of this as a methodology, having lost their groundworks to rainfall events on several other comparable projects during recent wet years.

With significant creek flows occurring at this location, the potential for Council to construct a bridge that remained flood-free at the ARI 100-year or one per cent Annual Exceedance Probability (AEP) level was quickly discounted, and a number of alternate solutions were assessedbased on the philosophy used in downstream upgrades in the neighbouring Council.

The evaluation looked at construction costs of the various elements, the pros and cons for each, and provided a method diagram for many of the options.

Being engineers who had designed many house slabs using the waffle pod technology, MTCE was comfortable with this method of construction and advocated for it, noting the potential negatives of some of the other alternatives and the specific advantages of the waffle pod product.

MTCE noted particularly the speed of construction, the ability to leave the existing causeway in place, and minimising disturbance to the creek bed.

While a unique solution for a causeway replacement project, they inspired confidence to proceed with the design process using the waffle pod system.

Waffle pods have been used in house construction for many years. First developed in South Australia to cater for the highly reactive clays of Adelaide, they have become widely used across Australia. The pods are boxes, 1.09m square and varying in height. 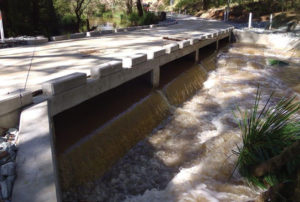 Depths of 175, 225, 300 and 375mm are available to suit different ground conditions. They are made of light Styrofoam, much like an old coolite surfboard. These boxes are basically void formers that suspend a concrete slab over the boxes between concrete beams that are formed between the pods.

For houses, this creates a stiff slab that is very strong.  For the waterway area of this project the pods were arranged on the causeway for the pour and subsequently removed to create a skewed insitu box culvert resting on the old causeway.

The pods, stacked two high and two wide, created openings 2.18m wide and 0.6m high in the box culvert sections. Beyond the waterway, the pods were placed on the road and remain in place.

The size of the pods was reduced as the road rose out of the causeway until it basically joined back to the level of the top of the new causeway. These approach pods significantly reduced the amount of concrete that was used in the abutments.

Removal of the pods from the causeway was considered a challenge. The pods were wrapped in plastic to prevent adherence of the concrete. MTCE engineers tested varying amounts of solvent required to cause the pods to collapse, primarily to prevent any excess solvent leaching into the river.

Ultimately this solvent process proved too slow for the contractors who found that mechanically breaking up the pods with a crowbar and shovel, and removing the material by hand, was the quickest method.

The Styrofoam of these pods held together well, so there was very little breakout and the pieces were easily removed, collected and stored. When these pods were first introduced into NSW, legislators foresaw a problem with the leftover sections of pods becoming a litter problem, and determined that the manufacturer or supplier must collect all unused portions of the Styrofoam for re-use in the manufacturing process.

On this project, all left-over foam was packaged into large bags and the supplier picked it up and returned it to the manufacturer for recycling.

Working with the old causeway

The design was by no means straightforward. The initial plan sets contained only three pages. The final plan set that went to tender was 20 pages, containing numerous cross sections detailing the various stages of construction as foreseen when working with the existing structure.

The old causeway was found to consist of a number of concrete slabs separated by gravel cobbles with the edges held in place by old timber.

The design called for the removal of these old timbers. The voids left were replaced with concrete beams. These edge beams also provided an opportunity to widen the causeway.

The legs of the skew culvert rested on the old causeway. At these points, holes were drilled through the various slabs, shear connectors installed and grouted into the cobbles below.

The potential for overturning of this structure was similar to the Gloucester Shire Council causeway bridges. This was overcome by extending the legs of the culvert upstream and fixing them to the bedrock below.

In order to ameliorate the problem of floating debris that was apparent on the downstream structures, these extensions were designed with a sloping face to act as deflectors channelling debris through or over the
boxes.

An open tender went out for the project, and as may be expected of a new-design construction system, the tendered prices varied wildly, reflecting the unknown nature of working in a waterway on an old existing structure using an untried construction system.

Local building firm Reece Construction won the tender and the project was completed successfully and without mishap in eight weeks, with a road closure period of only three weeks.

The waffle pod system provided a quick, cost-effective method to install a low-level culvert over the existing concrete causeway. This method reused and built upon the existing infrastructure, provided a higher level of service to the road and in this instance preserved significant aquatic habitat and irrigation access upstream of the structure.

Clever design also provided fish passage through a fish ladder utilising the existing pipe.
Local tradesmen were comfortable with the construction method which did not require specialist or large lifting equipment.

Thoughtful and clever design overcame potential issues with the project, and this design and construction methodology may be a useful tool for other councils dealing with similar rural causeways and looking for a cost-effective solution.

The author wishes to acknowledge the efforts of Phil Miles, Senior Leader Asset Planning at Greater Taree City Council; and Phil Thornton and Carey Molloy, engineers at Matrix Thornton Consulting Engineers; for their efforts in helping to prepare this paper. The full paper can be viewed online at www.apas.org.au/apas2017