Two high tech machines never before used in Australia will begin laying track on a new elevated rail line as part of the next phase of the Caulfield to Dandenong Level Crossing Removal Project.

After being put through their paces at a testing facility at Clayton South, two machines will shortly start work at Noble Park, where they will shift and place long segments of steel rail.

Construction Director, Simon Barnes, said the main benefits of the devices – operated by remote control – are speed and safety. “They’re built for efficiency and precision, to get the job done faster,” Mr Barnes said.

Without the machines each section of track would need to be installed manually by crews working on top of the elevated beams – a challenging task given the sheer quantity and degree of precision required.

Every single beam is now in place to form a 2.7km section of elevated rail that will take trains over roads at Corrigan, Heatherton and Chandler Roads, removing three dangerous and congested level crossings for good.

How the new rail components are installed: 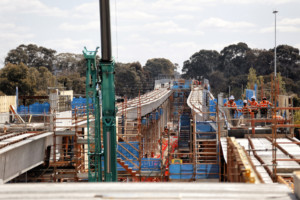 With track works soon to commence, bundles of Australian steel lengths have already started being delivered to site via a welding facility in Spotswood.

The machines play an integral part in installing a special type of track design being used on the Caulfield to Dandenong project to limit noise and vibration. The current track design on the Cranbourne/Pakenham line is more than 100 years old.

Along with steel rail, the machine will also shift and lay concrete ‘plinths’ – an alternative to the traditional sleepers laid over stony ballast.

Combined with built-in noise barriers and rubber insulators under every piece of track, the result will be less noise and vibration from passing trains – with the decibel level to be lowered further once boom gates are gone.

Mr Barnes said around 15 workers were being trained to operate the custom-built machines, which will be guided at speeds of up to five kilometres per hour by a hand-held remote control device.

“This is the first time this kind of machine has been used in Australia, and our track team have done a fantastic job both designing it and getting through the initial learning curve so everything is ready to go,” Mr Barnes said.

So far more than 4000 workers have honed or developed new skills by taking part in one of 76 different training courses offered by the Caulfield to Dandenong Level Crossing Removal Project.