One of Australia’s largest tollways, EastLink, has been the first to introduce tunnel ventilation on demand to reduce power usage, greenhouse gas (GHG) emissions, maintenance costs and noise.

The 40km road network is the largest privately operated network in Victoria; as well as being Melbourne’s fastest road and safest freeway, with traffic averaging 250,000 vehicles per day.

EastLink’s tunnels – in particular the tunnel ventilation system – are the largest consumer of power within EastLink’s operations. The temporary air quality station set up as part of the trials.

EastLink has twin 1.6km tunnels, with three lanes of traffic in each tunnel.

The tunnels, which are monitored and controlled from EastLink’s 24/7 traffic control room, have extensive safety systems.

The tunnels have a ventilation system which expels and disperses tunnel air (containing pollutants from vehicles’ combustion engines) through 45m high ventilation stacks.

There is one stack per tunnel. This maintains air quality inside the tunnels as well as in the areas outside each tunnel portal.

The ventilation system can also be controlled in the event of a fire in the tunnel – to help contain the fire initially, and then to dissipate smoke after the fire is extinguished by the deluge system. 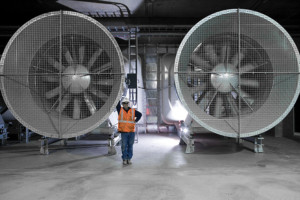 The original tunnel ventilation system has been in use since EastLink opened in 2008.

That’s a total of 34 fans across the two tunnels and two stacks.

The jet fans maintain constant airflow in through each tunnel portal, along the length of each tunnel, and towards the base of each ventilation stack.

The ventilation fans draw air up through each stack for expulsion and dispersal well away from local properties.

Higher airflows, and therefore more operating fans are needed to clear the pollutants produced by higher volumes of traffic.

Since EastLink opened, the speed of airflows within the tunnels and stacks has been controlled by switching individual fans on and off.

There was no speed control for any of the fans.

This switching on and off of fans has been controlled by EastLink’s road and tunnel operating system using a simple pre-set program based on time-of-day parameters, with the largest number of fans operating at peak periods (when traffic levels and pollutants are expected to be at their highest levels).

Manual control has also been available from the EastLink traffic control room to override the pre- set program when operators observe conditions that require it.

In an Australian first, during 2010, EastLink’s tunnel ventilation system licence, issued by the Environment Protection Authority of Victoria (EPA Victoria), was amended following application from EastLink to allow all ventilation fans to be switched off at night, when traffic levels on the road network are relatively low.

This mode of operation is known as “tunnel portal emission”.

The EastLink tunnels have operated successfully with night-time tunnel portal emission since 2010, which reduced power usage and GHG emissions. In addition, ventilation system noise was able to be eliminated each night, helping nearby residents.

While introducing night-time tunnel portal emission delivered a significant improvement in efficiency, there were still issues with operating this traditional type of tunnel ventilation system:

The tunnel and road operating system was updated to provide software control over the new impellers and variable speed drives.

The tunnel and road operating system has also been enhanced to provide fully automatic control of the ventilation system.

It does this by monitoring the output of the existing air quality and airflow sensors located within the tunnels, and automatically controlling the operation of all fans, including the speed of each ventilation fan that is operating at any time.

To achieve efficiency of operations, the new automatic ventilation control system is currently being “tuned” during a series of live tests.

This information is informing the final setting of the parameters that govern the new automatic ventilation control system.

The tunnel ventilation system will respond to the volume of traffic travelling through the tunnels, as well as the vehicle mix, for example the proportion of heavy vehicles with diesel drivetrains.

These improvements to the tunnel ventilation system are enabling a new change to the EastLink tunnel operating licence to be agreed with EPA Victoria.

This introduction of limited tunnel portal emission during day time will further increase the efficiency of the tunnel ventilation system.

Airflow is measured at the tunnel portals and within the ventilation stacks.

The previous day’s air quality charts are published automatically on the EastLink website, and quarterly reports are also published on the same page.

A temporary air quality monitoring station has been set up in a small park, located in a nearby residential area close to one of the tunnel portals.

The precise location was identified through modelling, to ensure that the air quality results are worst case rather than best case.

This additional air quality monitoring commenced prior to project implementation to determine the air quality baseline, and will continue until EastLink and EPA Victoria are satisfied that air quality standards have not been compromised by the changes. 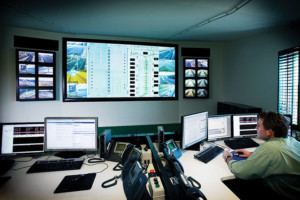 It was essential to engage with the community about these changes.

Local residents living close to the EastLink tunnel portals were provided with information about the project before it commenced, as well as at subsequent updates.

This included advance notice of the tune-testing of the new ventilation system, some of which needed to be conducted in the evenings at times when the tunnel ventilation system was normally switched off for night-time tunnel portal emission.

Local residents living near the park where the temporary air quality monitoring station is located were additionally informed about the purpose of the station, as well as the rationale for selecting that specific location.

Local councils were also consulted prior to project commencement.

Motorists who use EastLink were provided with advance notice of a series of night-time lane closures in the tunnels, which were needed to install the new tunnel ventilation fans.

EastLink has not received any complaints from the community about this project.

EastLink recommends that operators of major road tunnels consider whether similar changes to their tunnel ventilation system might provide community and business benefits without compromising their applicable air quality standards.

A leader in infrastructure sustainability