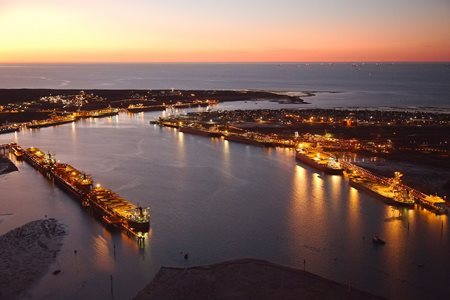 Pilbara Ports Authority and its contracted surveyors, Precision Hydrographic Services, were recognised for their outstanding contribution to the science of hydrography for the Tidal Model Project.

In 2012, Pilbara Ports Authority began a tidal study project at the Port of Port Hedland. The study resulted in a redefined Lowest Astronomical Tide Model or Hydroid unique to Port Hedland channel.

This has enabled extra depth availability in the shipping channel, increasing the average draft of bulk carriers up to 71cm, allowing more cargo. Plus it has extended the available sailing period by 30 minutes, allowing an additional vessel at every high tide.

With each 10cm of increased draft equating to approximately 1,200 tonnes of extra cargo per vessel, the benefit of the study has been substantial for port users. The award committee noted the project’s innovative approach and its contribution to promoting the hydrographic discipline, as well as the positive outcomes of the project contributing to regional and national economic benefits.

The committee also acknowledged the project as hydrographic best-practice including the development of robust and safe standards for other port authorities.

The award will be presented to Pilbara Ports Authority on 15 February 2018.