The project to create a 110m wharf extension at Eden on the NSW coast has reached another milestone, following the completion of dredging works.

An eight-week-long dredging project, which began in November 2017 has removed 231,500 cubic metres of sediment from Eden’s seabed to prepare the port for visits from some of the world’s largest cruise ships.

To make sure the seabed was cleared properly, the Port Authority of New South Wales’ survey team was called in to make sure the channel will be safe to host these giant ships. 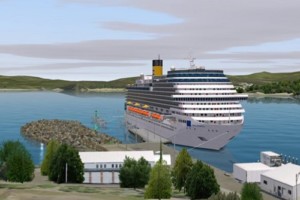 Port Authority of New South Wales’ survey team ensures the waters of Sydney Harbour, Port Botany, Yamba and Eden are safe for shipping at all times.

They are called out to accurately measure the depth of channels and create highly accurate topographic imagery to map the seabed using state-of-the-art echo sounder equipment.

The Port Authority survey vessel, Port Explorer, was transported overland from Sydney to Eden to carry out the extensive survey work.

They made sure the channels approaching the site of Eden’s new wharf are clear and that the areas where the massive amount of sediment was deposited hasn’t created a hazard for cruise ships.

The significant project will allow the biggest cruise ships – over 300m in length – to berth in Snug Cove instead of having to anchor in the harbour and ferry passengers to and from shore by tender.

A final survey check by the Port Authority team will take place prior to the first ship visiting the improved wharf.