While any road project is complicated by the need to work in a live environment, when the roads are on a 24/7 airport, the complexity goes up a whole other level. Add to this, 120,000 cars a day across the airport’s road network, tens of thousands of pedestrians, a mix of vehicle types operating in a confined space, and a terminal forecourt that sees 30,000 vehicle movements each day – all while ensuring passengers can get to and from their flights easily and with a minimum of fuss. Melbourne Airport is currently tackling exactly this problem as it undergoes major developments of its infrastructure.

Melbourne Airport has grown rapidly in recent years. In 2017 alone it added almost 1.5 million additional international seats to its capacity. While this is great news for the Victorian economy, and delivers more choice than ever before for Victorian travellers, it is having a significant impact on the road system to, and at, the airport.

“Growing traveller numbers directly correlate to more vehicles on the airport’s road network, which is why we are upgrading our road network.” 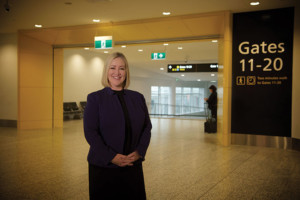 The soon-to-be-completed Tullamarine Freeway widening works will address one part of this problem, while actually presenting airport operators with another; how to handle all of the additional vehicles that a streamlined freeway network is about to deliver.

To tackle that problem, the airport is undertaking a program of works to address congestion and improve flows throughout the estate, with a particular focus on the main forecourt. A number of nimble projects are already underway that drivers can take advantage of to streamline their airport visit, and major works are slated to start later this year.

Since the CityLink Tullamarine Freeway widening project began in October 2015 the number of passengers travelling through Melbourne Airport has increased by around 3.5 million a year, or more than 10 per cent. With the completion of the ‘Tulla’ widening works over the next six months, an improved journey to the airport will bring into stark focus the existing congestion within the airport confines, exacerbated by the increased vehicular traffic in and around the forecourt.

Melbourne Airport has made, and will continue to make, a series of improvements to reduce this congestion. Part of the solution to forecourt congestion is major capital works to reduce intersecting traffic and provide significantly expanded elevated drop off and pick-up curb space.

Melbourne Airport is already home to two elevated loop roads – one to the Departures level of the original terminal building (Terminals 1, 2 and 3), and the other to the T4 Transport Hub, which opened in 2015. Option design works for the new road requirements have been undertaken over the last six months and an affordable, preferred option is currently being fine-tuned prior to breaking ground.

In the interim, Melbourne Airport has already taken a number of steps to improve things, with a real focus on introducing dynamic lane management for the existing roads. The first big problem to tackle is morning congestion on Departures Drive (the elevated loop road to T1, 2 and 3). To address this, the airport has opened up a lane of the ground-level arrivals forecourt as an alternative drop-off option. This will give it the ability to redirect hundreds of cars off the elevated road during the morning departures peak.

As much of the congestion is occurring from the time taken to unload passengers, the airport is deploying extra customer service staff out front of the terminal. These staff will assist travellers to get themselves and their luggage out of cars and helping direct cars safely and more efficiently in and out of the terminal.

While that’s not an infrastructure solution in itself, it’s underpinned by smart technology that enables it to use all lanes to its best advantage – and helps ensure the physical works being carried out don’t create chaos. To stay on top of rapidly changing congestion levels around the clock, the airport is using cutting-edge monitoring technology so it can keep track of traffic movements in real time and make quick, operational decisions about managing traffic flows at any time of day.

“While heavy infrastructure solutions are important, smart technology has moved from an emerging trend to a necessity for improved road performance. For the airport, it is critical to integrate to our road network and infrastructure,” Mrs Argus said.

To reduce congestion during peak periods even further in the future, the airport is about to start installing new overhead signs to allocate traffic across the elevated and ground level lanes, similar to the variable lane signage found on Victoria Street in Abbotsford, or Queens Road past the Albert Park Lake.

The airport is also introducing a new, free 10-minute wait zone for public pick-up, which is taking over part of the car park. It is currently building a dedicated ‘fast track’ entrance from Centre Road for easier access to the area, and this will open in May, which again will lessen demand on the congested forecourt.

On top of this, there’s still an issue with many travellers flying domestically with Jetstar, Tigerair, Rex and Air North needing to get to T4 but finding themselves in the T123 forecourt. The reason for this is that the freeway exit to T4 is combined with entry to the freight precinct and it is positioned just as you enter the airport precinct. It’s not an intuitive place to exit for terminal access, and drivers who are not familiar with this route are missing it.

To address this, the airport has started work on a new dedicated exit off-ramp that will take drivers from the freeway (just before the Centre Road intersection) straight up a new bridge that will merge into the existing T4 entry point. It is a big project and will run through to 2019. In the interim, the airport has made enhancements to the road signage from the Tullamarine Freeway to the T4 drop off and pick-up areas.

Finally, to deal with the expected long-term growth of passenger traffic through the precinct, the airport has commissioned design development for new access paths and major expansion to the T123 pick-up and drop off areas. The purpose of this will be to remove a significant portion of traffic from the Centre Road intersection and double the size of the set-down areas.

“The biggest challenge of these upgrades is maintaining a 24 hour airport operation in a live operating environment while minimising the impact on travellers. To minimise disruption Melbourne Airport will conduct staged works in collaboration with key stakeholders and contractors,” Mrs Argus said.

“The works will be rolled out progressively over the next two years.”

Melbourne Airport will be the first airport in Australia to have a complete smart security terminal. Construction begun in February 2018 and will be complete in November 2018.

Construction has already begun and will be complete by the end of September.