Proposals for railways across inland Australia have been around for more than a century. With 2017 delivering a firm commitment to Inland Rail from the Federal Government, the project is steaming ahead. Significant milestones have been passed in early 2018, including the first delivery of new steel rail and awarding contracts in Queensland for engineering and environmental investigations.

With major construction work getting underway in 2018, we are expecting the first trains to operate between Brisbane and Melbourne in 2024-25. Inland Rail will connect Australia’s second and third largest cities via regional Victoria, central New South Wales and southern Queensland, to complete the ‘spine’ of the 1,435mm standard gauge national freight rail network.

Inland Rail is Australia’s largest freight rail infrastructure project since completion of the Alice Springs – Darwin line more than a decade ago. To give an indication of the scale, the route is as long as New Zealand and it will require enough steel to build five Sydney Harbour Bridges. 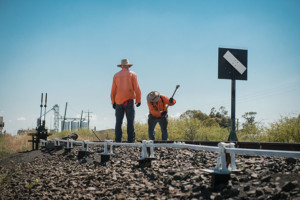 The transport and logistics sectors currently contribute 14.5 per cent of Australia’s Gross Domestic Product, with the supply chain worth around $150 billion a year. In order to compete in international markets, Australia needs to have competitive domestic freight transport and efficient supply chains.

Around 70 per cent of Australia’s population lives along the east coast, accounting for 78 per cent of all employment and generating 75 per cent of the nation’s GDP. Our population is expected to increase by 60 per cent over the next 40 years, and the volume of freight moving in Australia is predicted to double or even treble in the next 50 years.

Continued reliance on road transport, which today handles around 74 per cent of the inter-capital freight moving between Brisbane and Melbourne, would pose significant impacts in terms of safety, energy efficiency and environmental impact, particularly as the number of trucks increases to accommodate growing freight volumes.

Inland Rail has thus been designed to pass through Australia’s four most productive farming regions, offering supply chain benefits and cost savings for agricultural producers, as well as flow-on effects to regional communities. It will also open up new demand, and create opportunities thanks to improved accessibility and greater efficiency.

ARTC has been leading the development of the Inland Rail project since 2006. The project has been shaped by market needs and community feedback as much as engineering constraints.

Transit time is key for the operators. Rail freight moving between Melbourne and Brisbane currently runs via Sydney and the NSW coastal route. The long transit time has been a deterrent for potential customers, with freight rail’s share of this market standing at only 26 per cent.

The shorter inland route will be up to 10 hours faster, allowing freight to move directly between Melbourne and Brisbane without having to thread its way through the congested Sydney area.

As well as a transit time of less than 24 hours, our customers told us that reliability and availability are also paramount. They also wanted provision for longer trains to improve productivity, so Inland Rail is being designed for longer trains for greater capacity. 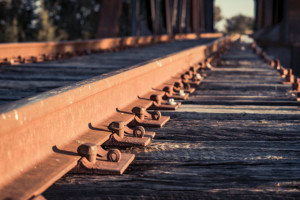 Inland Rail will also have 7.1m clearances which are needed for double stack operation. At present the only route in Australia that can accommodate double-stack trains is the east-west corridor linking Parkes in central NSW to Perth.

Interoperability is a key technical characteristic that underpins the Inland Rail service offering. To be competitive, and to meet the needs of our operators, we will provide full interoperability with the interstate mainline standard gauge network.

From the outset, the north-south corridor has been designed to make use of as much as possible of our existing interstate network. Around 65 per cent of the 1,700km route will use existing alignments, which will be upgraded where necessary.

Inland Rail will follow the existing interstate line for 490km from Melbourne through northern Victoria to Illabo, NSW, north of Junee. It will then run via Parkes, Moree and Toowoomba using a mix of new and upgraded tracks, to join the existing Sydney – Brisbane interstate line at Kagaru, giving access to the terminals at Acacia Ridge and Bromelton in southeast Queensland.

Building Inland Rail consists of a complex mix of upgrading existing tracks, and building new tracks in a variety of environments – from passing through suburbs, traversing mountainous terrain, boring tunnels under ranges, to crossing floodplains.

The Victorian section of Inland Rail is planned along 305km of existing rail corridor from metropolitan Melbourne to the Victoria-NSW border at Albury-Wodonga. This project will see enhancements of existing structures and increased clearances along the rail corridor. The enhancement works are required to accommodate double-stacked trains of 1,800m in length to be run on the track.

The NSW section of the Inland Rail is divided into seven projects which will require enhancement of 649km of existing rail corridor and building 381km of new tracks. In Queensland, there are five projects which will require enhancement of a total of 127km of existing track and building 272km of new tracks to complete the Melbourne to Brisbane Inland Rail.

One of the most exciting projects will be the construction of a 6.4km long tunnel near Toowoomba to carry the line under the Great Dividing Range west of Brisbane. The tunnel will have an 11m diameter to provide clearance for double stacked containers and it will be one in 65 grade, meaning trains will be able to ascend and descend the length of the tunnel without requiring assistance.

The most difficult technical challenge is the ventilation of the tunnel. Keeping diesel trains travelling uphill cool enough to operate without de-rating or even stalling will require significant mechanical ventilation, especially considering the heat of the Queensland summer. ARTC has approached many world leading ventilation specialists to assist in overcoming this challenge, with the optimal solution to be developed in collaboration with the private sector.

This section of the project not only comprises tunnels, but numerous viaducts are also required throughout southern Queensland. Some of these viaducts will be up to 40m high and others over 1km long in order to traverse mountain ranges or to span floodplains.

ARTC will be one of the first railways to construct with flood modelling taking into account the updated Australian Rainfall & Runoff (ARR 4th edition) – which now considers projected rainfall patterns associated with modelled climate change impacts, in addition to historical and anecdotal evidence.

ARTC’s guiding principle is that in sections where Inland Rail will be upgrading existing lines, it will not materially change current flooding patterns, and in sections new tracks are being built, design will be based on modelling for one in 100-year events. The challenge here is steep – every section has a one in a 100-year event at a different time, and every event differs from the rest in terms of the volume of water, the velocity of the flood waters and how quickly or slowly the flood levels recede. 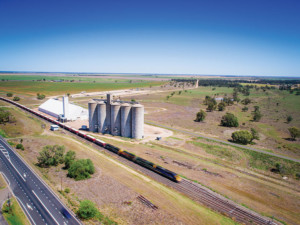 To build the best possible rail line, ARTC will follow a robust plan, consulting as widely as possible and constructing to the best engineering plans.

Throughout the alignment, Inland Rail will come across a multitude of crossings – from highways of differing sizes and traffic volumes, to local roads, private roads and traditional stock movement routes. These each will pose their individual challenges, which will in turn require tailored solutions to ensure the communities and businesses served by these roads continue to have access.

The Inland Rail project team has been growing steadily, and we now have around 120 staff spread across offices in Brisbane, Toowoomba, Sydney and Melbourne, supported by a range of consultants. More will be added in the first half of 2018, particularly in the area of stakeholder engagement and communication.

ARTC has stepped up the pace of the project. The first 600 tonnes of the 14,000 tonnes of steel rail required for the Parkes to Narromine section was delivered in January 2018, with further deliveries scheduled to start off the upgrade of the existing line and 6km of new construction to improve connections at Parkes.

The work involves replacing the steel rail, concrete sleepers and ballast; realigning some of the tighter curves; raising the level of the formation where required; and strengthening or replacing culverts and bridges as necessary.

We expect construction to begin in 2018 once all the necessary state and federal approvals have been received.

With 2024-25 fast approaching, there is still a lot of work to do, but the end of the long road is now on the horizon. The completion of Inland Rail as the north – south spine of Australia’s rail network will finally bring to fruition the vision of advocates over many years, allowing the nation to reap the benefits of this essential project.