The new Bendigo Hospital has been designed and constructed for the future, by improving patient care and addressing the growing service capacity needs of Victoria’s regional Loddon Mallee community. This is why stage one of the project has won several accolades, including two awards at the 2017 Victorian Premier’s Sustainability Awards.

Made possible through a Victorian Government investment of $630 million, the new Bendigo Hospital is the largest regional hospital development in Victoria’s history and one of the largest hospital projects across Australia. The new hospital has been designed to be more than double the size of the previous facility to meet the urgent needs of the regional community’s growing and aging population now and into the future.

Exemplar Health’s role also includes maintaining the hospital for 25 years after its opening, and the consortium is delivering a broad range of facility management services, enabling the operator, Bendigo Health, to focus on the provision of quality healthcare services to Victoria’s central and northern regional communities.

The hospital’s completion is presented in two stages; the first stage of the project, the main hospital campus, achieved Technical Completion one month early in 2016, achieved Commercial Acceptance and opened for business in January 2017, and the second stage is poised to be complete in mid-2018.

Award-winning design for stage one 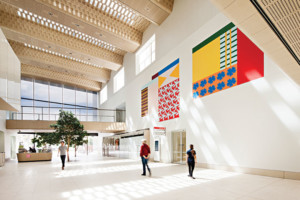 Stage One included construction of the new hospital itself with capacity for 372 inpatient beds, eleven new operating theatres, a cancer centre, four radiation therapy bunkers and an 80-bed integrated psychiatry unit. Also established as part of this project’s Stage One development, was a 128-room hotel and a 100-place childcare centre. High-quality retail and food outlets enhance the new hospital’s warm welcome to hospital patrons, patients and staff in both stages of the project.

The ‘Healthy Communities and World Class Healthcare’ vision of Bendigo Health Care Group, the state’s provider of clinical services, goes above and beyond just a new facility. It is based on a set of healthcare principles that help support Bendigo Health professionals to shift the balance of care, with a particular focus on patient-centred care, and a more preventative and community-based coordination of services.

With the region’s projected growth in mind, the new hospital has been designed to meet the anticipated increase in demand for services. The new cancer centre, for example, reduces the need for local patients to commute to Melbourne for specialised treatment. This fully integrated cancer centre brings radiotherapy, oncology and outpatients together in one department, increasing day chemotherapy chairs, outpatient consulting rooms and providing two additional radiotherapy bunkers.

Within its design, the new hospital’s connection to nature is emphasised throughout. Neutral colours and natural materials have been used when possible along with extensive creative landscaping including multiple courtyards and terraces for use by hospital patients and visitors. Environmental sustainability was one of eight components that the bidding teams used to guide the project to become a world-class facility, with the aim to provide a healthier environment for patients, staff and the community.

The principles of healing environments have been incorporated into the psychiatry precinct giving access to 13 landscaped courtyards, designed to encourage a tranquil, settled atmosphere. This is a sample of the broader design principles applied to the new hospital, which also offer greater access to green outlooks, over 40 courtyard and balcony spaces and natural light – all aspects that are proven to bring about a safer and a more positive environment.

The non-clinical aspects of the new hospital are equally impressive and very much aligned with state-of-the-art design principles. For instance, the new facility incorporates a 200-kilowatt roof-mounted solar photovoltaic (PV) panel array which is installed to both reduce the CO2 emission footprint of the new hospital and also to reduce the mains electricity demand during peak summer periods.

Stage One of the Bendigo Hospital won two awards at the 2017 Victorian Premier’s Sustainability Awards, including the Premier’s Regional Recognition prize.

Making a traumatic time easier for the community

Once the helipad is commissioned, the Bendigo Hospital will be able to accept more patients from the Greater Loddon-Mallee region, and enable families to stay close during often traumatic times. The current alternatives are to fly directly to Melbourne, or to land at the Bendigo Airport and complete the journey by road, often requiring up to two hours of additional transport time.

The new link bridge that connects Stage Two to the Bendigo Hospital is a two-level structure that was installed over the dividing road in a matter of hours. Components were locally engineered, manufactured and connected at a nearby stadium and transferred to the site for installation during difficult weather conditions. Road overpasses are uncommon in Bendigo, so much so that many members of the public set up picnic chairs outside the exclusion zone to witness the significant installation.

The dual levels of the new link bridge will provide separate entries for the general public and trauma patients. The uppermost level is for the exclusive use by those patients transported to the helipad, while public and general patient access via the lower level will connect the Bendigo Hospital with the new multi-deck car park, conference centre and services offered in the old hospital buildings.

Integration of existing and new services was a highly complex and detailed process during Stage One, with Exemplar Health working hard to open the Kitchen of the new campus six months early, and achieve Technical Completion one month early, in order to allow Bendigo Health and Spotless the time to train staff in the new building and upgrade systems to suit the cutting-edge development.

The hospital began operations the day after Commercial Acceptance, with the unprecedented success of the move to the new facility. Meticulous planning for ‘move day’ resulted in hundreds of patients successfully moved safely and ahead of schedule. Stage Two is on track to achieve a similarly high standard of service delivery and state-of-the-art facility in mid-2018.