Satellite positioning trial hints at the future of our roads A two year Satellite-Based Augmentation System (SBAS) trial is testing how industries in Australia and New Zealand can benefit from improved satellite positioning technology. VicRoads is one of the participants, with a project focused on how SBAS technology can be used to enable vehicle automation, improving road safety and facilitating the development of intelligent transport networks.

A VicRoads Bosch Transport Accident Commission (TAC) highly automated driving (HAD) vehicle has been fitted with world-first satellite positioning technology as part of a trial of a Satellite-Based Augmentation System (SBAS) for the Australasian region.

The VicRoads project is one of more than 30 selected from almost 90 applications to participate in the SBAS trial, with supported projects spread across ten different industry sectors, including road, rail, maritime, construction, agriculture and resources.

Dr John Dawson, Section Leader, Positioning at Geoscience Australia said that two separate calls to industry to participate in the SBAS test-bed in Australia and New Zealand had been completed.

“We received overwhelming industry interest, with over 90 industry consortiums proposing projects. An expert committee has reviewed all proposals and has decided to support more than 30 industry projects; the project agreements are being progressively executed. The infrastructure community was well represented in the supported projects,” Dr Dawson said.

The VicRoads project will allow further exploration into automated driving and will consider the ability of SBAS to support future automated vehicle positioning requirements.

“The trial will employ the Victorian Government-supported Bosch TAC HAD vehicle with an SBAS receiver to compare the accuracy of the SBAS to existing commercial positioning services used to facilitate automated driving,” Dr Dawson said.

“The Bosch TAC HAD vehicle will be driven in a variety of environments while collecting position information from an existing commercial real-time kinematic (RTK) service, standalone global navigation satellite system (GNSS), and the SBAS test-bed services. The trial will then provide an understanding of how SBAS services could perform in an automated driving environment.”

VicRoads will receive up to $89,500 in funding for the project and is making an in-kind contribution of over $31,000.

According to Dr Dawson, satellite positioning is going to be an essential enabler of automated car technology in Australia. 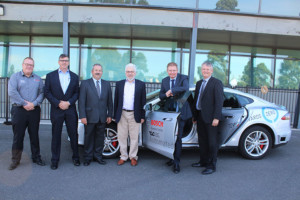 “Australian roads will provide additional challenges to vehicle automation because many of our roads are unsealed, without painted lines, and our landscapes are often without distinct features. These factors challenge relative positioning techniques based on camera and radar technology. In these environments, improved satellite positioning will be paramount.”

“SBAS has a benefit over commercial solutions as it provides additional information on how much you can trust your position as provided by the receiver. This is known as position integrity, and it’s really important in transport applications where there is an obvious safety-of-life requirement,” Dr Dawson said.

“SBAS has an additional advantage in that it’s an international standard and there are SBAS-capable chipsets widely available in user devices today. Consequently, SBAS provides a ready and cheap solution to Australia’s positioning needs.”

Australia’s road sector will potentially benefit from improved satellite positioning technology in a number of ways, including:

“These road maps will be generated using capture platforms (a car fitted with camera, radar and positioning sensors) and one project aims to demonstrate the use of SBAS to create more accurate and more timely maps.”

Several other projects show relevance to the infrastructure and transport sectors, such as one project testing precision guidance for remotely piloted aircraft and safety systems.

Another project is using SBAS to see if it can pinpoint underground assets, such as water pipes, with a margin of error less than 0.5-0.1m. If successful, traditional surveying of those assets could potentially be supplemented with mobile devices, which would revolutionise the area of asset location. 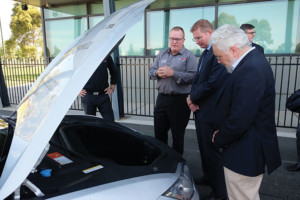 SBAS could also assist with pedestrian safety and help make cities and attractions more accessible to the physically and visually impaired through enhanced positioning and guidance.

Driving the growth of spatial technologies

“One example is in city planning, where future planners will walk around and experience augmented reality views of future buildings and infrastructure. This will enable improved planning decisions and help ensure community support in contentious planning processes,” Dr Dawson said.

One of the main challenges around the implementation of spatial technologies in the infrastructure sector is the geographic size of Australia, creating an enormous area map.

Dr Dawson said that spatial technologies will become increasingly important in future urban design and planning through the digitisation of the built environment.

“Spatial technologies underpinned by accurate satellite positioning will be critical as Australia moves to implement Smart Cities Plan concepts, where city assets and resources are managed in a much more holistic way by exploiting information and communication technology,” Dr Dawson said.