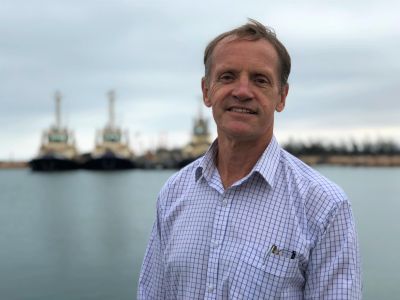 Since taking on the role in July 2006, Mr Klein provided an extended period of stability during a complex chapter of growth, expansion and political change.

He has overseen substantial port infrastructure expansion and trade growth during this period.

The port also witnessed trade growth greater than 250 per cent since 2006, made possible by port, rail and road investments of more than $1 billion.

Mr Klein said the last 12 years had been an exciting and challenging period.

“It’s on-track to exceed its budget performance for 2017/18, enjoys strong and improving employee and customer engagement, and is working on a highly prospective collection of new business opportunities.”

During this time, the port also hosted an international surge symposium to explore how operating days lost to surge could be reduced.

This led to a trial and subsequent purchase of Shore Tension Units – redefining the port’s operation and creating the opportunity to bring cruise vessels into the harbour.

Mr Klein then went on to form, and is the current chair, of the Cruise Geraldton Committee who aim to improve visitor experience and continue to increase cruise vessel visits.

“While we are facing some short-term challenges, the future is very bright,” Mr Klein said.

“In terms of my future, I will take a short break to spend time with my family before pursuing my next career challenge.”

Mid West Port Authority staff thanked Mr Klein for his years of service and wish him all the best for the future.