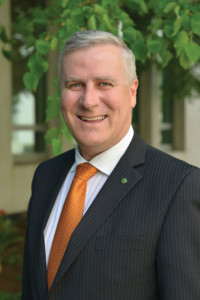 As you are keenly aware, transport infrastructure connects people to jobs, their homes and their communities, and allows Australian businesses to connect to domestic and global export markets. But the task is escalating.

Australia’s population is forecast to grow to around 29 million over the next decade and that means the demand for goods and services delivered through a safe and efficient supply chain will also continue to grow. At the same time, our cities remain the engine rooms of our economy, but our urban transport networks are increasingly congested, with the daily gridlock negatively impacting on productivity and the quality of urban life.

It is for these critical reasons that investment in transport infrastructure, including congestion-busting projects and a rail revival, is a core focus for the Liberal and Nationals Government.

Our commitment is emphasised in the 2018-19 Budget, with a pipeline of $75 billion over the next decade for investment in new and upgraded transport infrastructure. This figure includes a new $1 billion targeted Urban Congestion Initiative to remediate pinch points, improve traffic safety and increase network efficiency for commuters and freight movement in urban areas.

Everything we are doing is trying to help people get home sooner and safer.

We are also investing $3.5 billion over the next decade through the new Roads of Strategic Importance Initiative (ROSI). ROSI will deliver works such as road sealing, flood immunity, strengthening and widening, pavement rehabilitation, bridge and culvert upgrades, and road realignments—opening up corridors to provide a more reliable road network, improve access for higher capacity vehicles, better connect regional communities, and facilitate tourism opportunities.

Tasmania will receive $400 million for roads such as the Bass Highway, $100 million has been committed to improve access from regional New South Wales to the Australian Capital Territory via the Barton Highway, and Western Australia will receive $220 million for the Bindoon Bypass. Investment on this scale will drive the national economy and support jobs and economic growth in urban and regional areas by ensuring Australian industries remain globally competitive across all sectors.

In my dual roles as Deputy Prime Minister and Minister for infrastructure and Transport, I am proud to be able to say the Government is getting on with the job of delivering the major infrastructure projects, which are critical in meeting future challenges and opportunities.

Our current investments are already delivering significant economic benefits to urban and regional areas across Australia.

However, without major new investments, construction activity would suffer a significant decline from the early 2020s as current projects are completed.

To avoid such a downturn and to future-proof our economy, we have committed to a new 10-year Infrastructure Investment Pipeline. The pipeline is a list of nationally-significant land transport priorities in our major cities and across regional Australia. It has been developed by identifying serious transport network deficiencies that have the potential to constrain commuter and freight movements across both urban and regional Australia.

The pipeline will see substantial investment in urban road and rail initiatives and will provide certainty to the construction industry, facilitating the retention of a skilled workforce and enabling the creation of approximately 50,000 additional jobs over the next decade.

The pipeline is also dynamic.

New projects will be added as more priorities are identified through ongoing analysis and engagement with the State and Territory Governments and the private sector.

The pipeline of future infrastructure priorities has been called for by our communities, investors and the construction industry. Key projects include the Melbourne Airport Rail Link, METRONET in Perth, the Coffs Harbour Bypass on the Pacific Highway, and the Beerburrum to Nambour Rail Upgrade in Queensland.

In delivering the pipeline, the Government will ensure that all jurisdictions pay their fair share of the costs. Acknowledging the national productivity benefits that can be delivered through investment in key freight corridors, the Government will commit up to 80 per cent of the delivery costs of regional projects.

We will partner with State and Territory Governments on a 50:50 basis for major initiatives in our cities. In some cases, for instance where funding is for a rail freight initiative through the Australian Rail Track Corporation, the Government will be the sole contributor. The next phase of Government investment

While it is important that our investment pipeline establishes our plan for Commonwealth-funded priorities over the next 10 years, it is also essential that there is support to plan for the next phase of Government investment. Planning and business case development is a critical period in project delivery, often commencing many years before construction can start – especially when community consultation and complex engineering are required.

Accordingly, robust governance measures will be put in place to ensure that Australians get value for money for the investments we make on their behalf. This includes the establishment of a $250 million Major Project Business Case Fund.

Major projects will be subject to a vigorous business case assessment process before the Australian Government investment amount is finalised and funding starts to flow. Investments will also be predicated on State and Territory Governments providing their fair share of funding.

Opportunities for private investment will be explored and value captured to defray the capital costs of the project on an equal basis. Early commitments under this fund include $10 million to plan Eastlink WA in Western Australia, and $15 million for a Toowoomba to Brisbane passenger rail connection.

These new commitments build on the Government’s current major investments which are delivering once-in-a-generation projects such as the Western Sydney Airport and Inland Rail. We are also funding major road projects across the nation, including upgrade programs on the Pacific Highway in New South Wales, the Bruce Highway in Queensland, the Monash Freeway in Melbourne, the North-South Corridor in Adelaide, the Midland Highway in Tasmania and in Northern Australia.

Our current investment program also funds major rail initiatives such as METRONET in Perth and Regional Rail Revival in Victoria.

The next decade will see a major transformation of Australia’s land transport infrastructure networks and will secure
productivity and prosperity across our nation.