The Melbourne to Brisbane Inland Rail line will transform freight movement in Australia – and Parkes will be central to this opportunity.

Parkes is located in central New South Wales, and is uniquely positioned at the intersection of the East West rail line, the North South Newell Highway and soon, the new $10 billion Melbourne to Brisbane Inland Rail.

Parkes’ central location will be a game changer in the way freight is moved around Australia. It is the only place along the new Inland Rail where it all comes together with major logistics, manufacturing, warehousing, agricultural value-adding and distribution opportunities now being offered.

Parkes is capitalising on its potential to become a major national transport node. Already, more than 80 per cent of Australia’s population can be reached in less than 12 hours from Parkes, creating a valuable competitive advantage for companies looking to develop logistics, distribution and manufacturing operations.

“The hub at Parkes has been in the planning for decades as Parkes is geographically located in the centre of NSW and at the epicentre of the national transport and logistics network. Inland Rail will be a catalyst to change freight movement in Australia,” Parkes Shire Council Mayor, Ken Keith, OAM, said.

“Parkes is at the centre of that change and represents a significant opportunity for business to take advantage of improvements in freight efficiency.”

The Federal Government committed $8.4 billion to the Inland Rail project in the 2017 Federal Budget and tasked the Australian Rail Track Corporation (ARTC) with delivering the project. The first stage of the Inland Rail will be the $300 million upgrade of the rail line between Parkes and Narromine, and the construction of the east-west link at Parkes.

“The announcement by the Federal Government to start construction on Inland Rail has led directly to investment in Parkes, with Pacific National in October 2017 committing an initial $35 million to commence development of the company’s Parkes Logistics Terminal, which is set to be one of the largest private sector investments in freight infrastructure in regional Australia,” Mayor Keith said.

Once fully operational, Pacific National’s Parkes Logistics Terminal will have the capacity to process approximately 450,000 cargo containers each year, including the ability to haul double-stacked containers from Parkes to Perth.

The Parkes National Logistics Hub, is one of the largest greenfield intermodal sites in NSW and a project of strategic importance to the freight industry.

Parkes Shire Council prides itself on proactively developing Parkes’ future in logistics. It is strengthening its transport infrastructure, lifting the region’s profile with new strategic marketing campaigns, and working to facilitate collaboration between transport companies and governments.

“Parkes Shire Council is a progressive and innovative organisation that embraces new ideas and has adopted a philosophy of continuous improvement. We are not experts in transport, logistics or manufacturing, but we are experts in collaboration, advocacy and facilitation. Our aim is to connect businesses with opportunity,” Mayor Keith said. 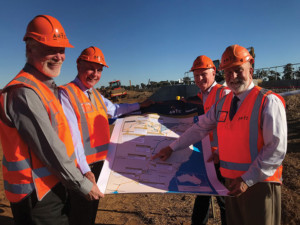 Innovation drives Parkes national logistics hub
With NSW State Government approval, 516 hectares of land was rezoned by council on the western edge of town for the Parkes National Logistics Hub. Another 100 hectares has been reserved for future development.

The Hub has been designed to operate 24/7 as a multi-modal transport facility with buffer zones, and has attracted leading logistics companies such as Linfox, Pacific National and SCT Logistics. Other transport, warehousing and manufacturing companies are showing strong interest in the Hub.

The terminal has been a real success for SCT Logistics and they are now in the process of planning for the development of a ‘Logistics City’ to form an integral component of the Parkes National Logistics Hub. With almost 300 hectares of prime land, SCT Logistics can offer a diverse range of investment opportunities for companies looking to leverage from Parkes’ key strategic
advantages.

SCT Logistics CEO, Glenn Smith, said, “When the Inland Rail is completed one of the great aspects of Parkes will be the ability to receive trains from Brisbane, Sydney and Melbourne ports and even Adelaide ports – they are all overnight by rail (to Parkes). SCT sees great opportunities for importers, exporters and manufacturers, who have a requirement to move freight efficiently.

“SCT is able to operate the largest intermodal trains in Australia because of Parkes’ unique positioning on the east-west rail corridor and the double-stack capability of its containers.”

Central location is key
Parkes National Logistics Hub is central to Australia’s transport network, it is central to global markets and central to 80 per cent of the Australian population overnight.

In addition, it offers very competitive warehousing costs, at least 50 per cent lower than in the largest capital cities, which provides options for logistics companies to improve supply chain efficiencies.

Parkes has several rail-freight advantages. It is the first point from Sydney where containers can be double-stacked on rail. B-Double access to Parkes is available on all major routes; road-train/B-Triple access is available from the west; and road-train linkages to the Hub from as far west as Adelaide have been identified.

“Australian products are seen internationally as ‘clean and green’. We believe that Parkes will play an important role in the ‘food export boom’ as we are situated in rich agricultural industry and boast a central location in a national freight network.”

Parkes’ strong foundations
Situated in NSW’s rich agricultural heartland, Parkes is ideally suited for the agricultural sector to value add, including processing facilities, centralised storage and distribution point for fertiliser, chemicals and fuel among other commodities and products.

Parkes’ highly skilled, competitive labour force is another asset. Wages are more affordable because Parkes’ median household income is about 30 per cent lower than the NSW median. Transport companies that set up in Parkes have a ready-made workforce and other workers who move there can access cheaper housing options.

Infrastructure upgrades are boosting the area. In addition to the Inland Rail, a bypass of the Newell Highway at Parkes is under investigation which will have direct links into the Hub. The Parkes Airport has had almost $5 million of investment with the runway upgraded and a new terminal. A Business Park subdivision has been approved, and planning for the airport is designed to integrate with the ongoing development of the Hub.

Parkes’ new $72 million hospital and $14 million Police Station add to the town’s infrastructure. Another $100 million is being spent on the construction of new water and sewage treatment plants, as well as an advanced water recycling facility and ring main. Parkes is also seeing millions of dollars being invested in solar farms and mining.

“We are on the verge of something big. The vision is huge, and the opportunity is absolutely immense. Parkes is where professional, creative and energetic people come together. Parkes offers multiple career and lifestyle advantages that all add up to support and grow your business,” Mayor Keith said.

The bridges, which are nearing the end of their operational life, will be replaced with concrete bridges to bring them up to the Inland Rail’s engineering standards.

In May 2018, the Federal and New South Wales Governments came together in Parkes to sign a landmark Bilateral Agreement, making way for the commencement of works on the multi-billion dollar Inland Rail project in NSW.

Deputy Prime Minister and Minister for Infrastructure The Hon. Michael McCormack, and NSW Deputy Premier and Minister for Regional NSW, John Barilaro, signed the Intergovernmental Agreement – a landmark moment in the delivery of the project.

NSW is the second state to sign up to the nationally-significant project. The new agreement provides consent for the Australian Rail Track Corporation (ARTC) to deliver Inland Rail in NSW.

Following on from the monumental announcement, the ARTC commenced the next phase of industry engagement with three city-based briefing sessions held in Brisbane, Melbourne and Sydney.

The sessions were live streamed to enable regional stakeholders to tune in and be part of the process.

“We are well positioned to benefit from the economic and supply chain development associated with the project, and these sessions detail the opportunities for local industry to be involved in the delivery of the Inland Rail and understand the industry requirements,” Mayor Keith said.

“A report by Regional Development Central West found that around 490 new jobs could be created in our region alone during the construction phase, and we want our local businesses to be ready to take advantage of these opportunities when the time comes.”