One of Australia’s largest tollways, EastLink, takes a look at the achievements of Australia’s tolling industry to date, and the future convergence of connected autonomous vehicles, tolling and road user charging.

Australia has 17 world-class toll roads with more under construction or planned. Every toll road in Australia operates with multi-lane free-flow technology. Tolling plazas, kiosks, coin baskets and boom gates have been eliminated from the nation.

Almost uniquely in the world, Australia has 100 per cent tag interoperability. Any tag, issued by any tolling operator, can be used on any toll road in the country. Every day, operators exchange the latest data about Australian tags. A tag beeps correctly whichever toll road it’s on. Operators even exchange licence plate details, so that if a tag transaction fails, for example the tag is not fitted correctly, the correct toll is still applied to the tag account. 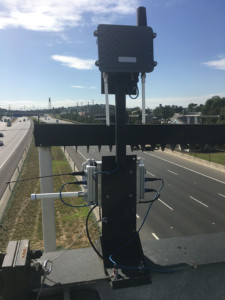 18 per cent of trips on EastLink have no valid tag. Instead, images are taken of the vehicle’s licence plates. Well over 90 per cent of these licence plate images are read fully automatically, with less than 10 per cent proceeding to manual verification by an image processing operator. This is despite the vehicles travelling at 100km/hr day and night, in all-weather conditions, and the myriad of licence plate formats and colours on Australian roads.

“After account, trip pass and toll invoice payments have been received, less than one per cent of trips on EastLink remain as unpaid debts,” Mr Spencer-Roy said.

Over the years, the tolling industry has made huge strides in improving customer services. At EastLink, 94 per cent of accounts receive electronic statements instead of paper. 62 per cent of account customers have set up fully automatic payment, significantly improving the customer experience.

“The EastLink website now receives more than 25,000 user sessions per day. This compares to EastLink’s Melbourne-based call centre operators, who receive less than a tenth of that volume in calls,” Mr Spencer-Roy said.

29 June 2018 is the 10th anniversary of EastLink’s opening. EastLink GM Information Technology, Bill Advic, said, “Over ten years, systems start to become obsolete. EastLink’s original back office tolling system had become too expensive to maintain, was near end of life, and would no longer be supported by the vendor. The decision was made to replace it with a new tolling system implemented by SICE, the Spanish-based international ITS provider.”

“Almost exactly one year after switching to the new system, software development defects – which are inevitable in a project of this size – have been resolved,” Mr Advic said.

“Customers and staff have become accustomed to the new features and business rules that were implemented with the new system. Once again it’s business as usual for EastLink, and we are turning our thoughts and efforts to new opportunities for improving the customer experience using the new tolling system.”

Potential for tolling improvements in the shorter term
For infrequent tollway users who have video accounts rather than tags, there is usually only interoperability within each state. A video account from a Victorian operator can’t be used to pay for a trip in New South Wales or Queensland, for example.

“There is no technical impediment to achieving 100 per cent video account interoperability. EastLink believes that it’s time for the industry to close this gap for infrequent users,” Mr Spencer-Roy said.

“In Victoria, a casual user can buy EastLink trip passes and CityLink 24 hour passes. Some might be confused by the fact these passes work in quite different ways. And if a casual user drives on CityLink and EastLink within the space of a few days they need to buy these passes from separate websites.

“If a casual user chooses to wait for toll invoices, separate invoices are sent by EastLink and CityLink, which need to be paid separately. With more tollways coming to Victoria in the future, the risk is more confusion for casual users. EastLink believes the industry players in Victoria should work together to find ways to make it easier for casual users.”

While less than one per cent of trips on EastLink are unpaid, there is recognition that tolling and infringement debts often accumulate in cases where the vehicle registration authority has out-of-date or incomplete post, phone and email contact details for the owner of a vehicle. In these cases, toll invoices, overdue notices and infringement notices may not be delivered to the owner.

“We ask that registration authorities consider new measures to improve the quality of contact details for the owners of vehicles,” Mr Spencer-Roy said.

In these circumstances, it is unreasonable to expect a toll road operator to be able to determine whether a vehicle is the original vehicle or the illegal vehicle.

“Motorists who report their licence plate cloned or stolen should be issued with a new licence plate by the registration authority, and the original licence plate number should be cancelled. Banks don’t let customers continue to use credit cards

whose details have been compromised. Registration authorities should take the same approach with licence plate numbers,” Mr Spencer-Roy said.

A future vision for connected autonomous vehicles, tolling and road user charging
EastLink Managing Director, Charles Griplas, said, “The EastLink concession continues until 2043. There are going to be many changes during this time.”

“It’s now up to vehicle manufacturers, road operators, governments and others to work together and deliver the changes that motorists are pushing for,” Mr Griplas said.

Most of these are privately owned SAE Level 3 vehicles — able to drive themselves, legally, on freeways and major highways without driver supervision. However, the driver still needs to take control of the vehicle in more difficult situations such as urban streets.

In 2028, some of the latest luxury vehicles have SAE Level 4 capabilities. On the most common journeys, such as to and from work, they have self-learned to drive completely autonomously.

By 2028, fully self-driving SAE Level 5 cars have started to appear in Melbourne and other state capitals, with vehicle sharing providers taking the lead. These vehicles don’t have a steering wheel or driving controls. Their range is limited to metropolitan areas that have been mapped in very high resolution, such as with LIDAR. However, they are very popular with younger people, who are increasingly not bothering to get driving licences.

Payment arrangements can be set up and administered via the on-board app. The on-board app does most of the work that is done by today’s centralised tolling systems — a “fringe processing” model.

From 2028, some lanes on freeways become dedicated to connected autonomous vehicles driving in autonomous mode, with platooning to unlock capacity gains.

Scenario 2038 – twenty years from today
Another ten years pass, and EastLink envisions that by 2038 most legacy vehicles are off the roads, helped by “cash for clunkers” programs. SAE Level 4 and 5 vehicles make up the majority of the vehicle fleet.

Private vehicle ownership will be declining, replaced by vehicle sharing. Around 2038, freeways and highways will be reconfigured.

One or two painted lanes in each direction will be used by the remaining human driven vehicles and the earlier generations of connected autonomous vehicles that are dependent on painted lane markings. The rest of the roadway will be unpainted.

The 2038 traffic control system will be able to direct controlled amounts of self-driving vehicle traffic, at lower speeds, through side streets, to take advantage of unused capacity while not impacting safety or local amenity.

The tolling industry needs to be up for the challenges ahead
“Of course, none of us can predict accurately what will happen in 2028 or 2038,” Mr Griplas said.

“But this is going to be a fascinating journey, bringing together connected autonomous vehicles, ITS, tolling and road user charging, full of technical and commercial challenges.

“The tolling industry needs to be up for these challenges, if it’s going to continue to keep Australia moving through the forecast population growth.”