The technologies tackling congestion on our roads Melbourne’s population is growing by almost 2,000 people each week, which means that the number of people who travel on our roads is increasing. 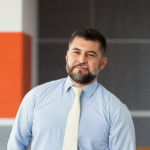 We understand congestion is a fact of life in a busy city such as ours – but by targeting the most important improvements at congestion hotspots – we can deliver relief where it’s needed most.

More than 1.1 million Melbournians drive vehicles to work each day with an additional 83,000 people travelling to work as passengers in vehicles. VicRoads manages and maintains over 23,000km of arterial road across Victoria.

We’re delivering billions of dollars in road upgrades to tackle congestion and cut travel times so Victorians spend less time stuck in traffic. We’re building, upgrading and improving roads right across Victoria to connect communities, increase capacity on our road network and ensure people have more transport choices closer to where they live.

While there is an unprecedented amount of work going on, we know we can’t simply build our way out of congestion. This is why we’re investing in technology-based solutions, including better monitoring and data collection, so we can get more vehicles moving more efficiently on our existing road network.

Implementing complex technologies
VicRoads has more than 600 Bluetooth sensors on the network and complex technology under our major freeways which helpus reduce the onset of congestion or divert traffic from incidents.
We’re continuously exploring and adopting new and cutting edge technologies to reduce congestion and improve journeys right across Victoria.

We’re using Lane Use Management Signs on many of our major freeways which use electronic overhead signs to provide road users with real-time information on road condition ahead.

These signs enable us to adjust speed limits and close lanes depending on road conditions and following emergencies, such as crashes, which not only improves the management of these incidents, but also provides smoother and safer journeys for drivers.

On many of our major freeways, including the Monash and West Gate Freeways, we’re using ramp metering which controls the amount of traffic entering the road, particularly during periods of heavy traffic volumes or following major incidents.

On-ramp metering has already proven highly effective in regulating traffic flow, with average speeds along the Monash Freeway increasing by 20km/h and casualty rates dropping by 30 per cent over the past decade.

Streamlining Hoddle Street is an example of a project where we’re using technology to help relieve congestion along this important corridor in metropolitan Melbourne.

More than 330,000 drivers travel along Hoddle Street every day making it Melbourne’s busiest arterial road. It has connections with all of Melbourne’s major freeways and train, tram, bus and cycling routes.

Drivers wanting to travel straight through the intersection often get stuck at the red light when drivers making right turns are on green time. Continuous flow reduces the long queues and delays you experience when other drivers turn right.

With continuous flow, drivers travelling south on Punt Road and wanting to turn right onto Olympic Boulevard will have a new, dedicated right-turn lane which will allow them to turn right at any time without delaying traffic travelling behind.

This means drivers on Swan Street can continue travelling through the intersection while drivers turning into Olympic Boulevard make their turn.

Changing the way drivers turn right will reduce the delays and queues along Punt Road and unlock the time drivers need to travel through the intersection.

Traffic congestion is an ongoing challenge, but at VicRoads, we’re investing in and developing new technologies and innovative solutions to keep Victorians moving.