Can freight save the lucky country? Australia has long been known as the lucky country, but how much luck did we make ourselves and how long can we keep the luck flowing?

Cost of housing in our major cities has been growing at a rate never seen before, congestion in our cities is at an all-time high, and thousands of people are commuting for an hour or more one way to get to work. So much so that the Federal Government is working on long-term ambitious plans for building ‘30-minute cities’.

Nevertheless we do have plenty to be thankful for. Our lifestyle, freedom and natural landscape are the envy of most countries. Our accessibility to education and healthcare are world class. So why are we happy with an overly complicated supply chain and poor development of our cities and infrastructure that is raising the cost of living. 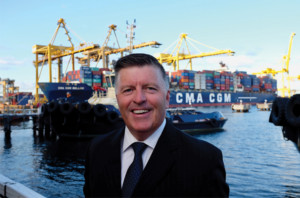 Ports represent a significant player in the supply chain managing 98 per cent of Australia’s trade, we are well positioned to visualise that Australians are indirectly paying a premium for the inefficiencies in our freight transport network.

Furthermore, recent analysis conducted for the Inquiry into National Freight & Supply Chain Priorities indicated that while Australia’s freight task is projected to double in the next 20 years, even with extra investment, our current transport infrastructure will be hard pressed to meet this demand.

Australia simply does not have an adequate plan to deal with this growth and very shortly we will reach 25 million people as a nation.

The current political response to this transport infrastructure problem are significant expenditure solutions that are increasingly focused on growing road user/commuter capacity. Case in point is recent investments in WestConnex and the widening sections of the M4 motorway. These infrastructure investments are well overdue for a burgeoning Sydney population and industry. However, these are reactive spending by government to tackle a problem that many in Sydney have faced for several years and hence we have the existing congestion and liveability issues. These two examples are mirrored across the country.

Current infrastructure development requires significant expenditure because many of the infrastructure corridors to facilitate the transport development were not planned for or protected by governments. According to Infrastructure Australia’s July 2017 report, Corridor Protection – Planning and investing for the long term, Australians could save $10.8 billion in land purchases and construction costs if adequate corridor protection occurs.

A current example we can all relate to is the Inland Rail. It does not connect to the port in either Brisbane or Melbourne, requiring potential double-handling of cargo from rail to trucks. Infrastructure Australia has suggested in its Corridor Protection report that through appropriate corridor protection mechanisms a future freight rail connection to the Port of Brisbane could save up to $66 million.

We need to actively protect future freight corridors. 40 years ago the corridors for Sydney’s M7 were quarantined from development and land for the North East Link extensions in Melbourne was set aside 50 years ago. The decisions of past governments have enabled recent governments to easily build infrastructure such as the M1, M2, M4, M5 and M7 motorways, and to accommodate the development of the Western Sydney Airport.

The last and first mile

Another key challenge is the last and first mile. That is the last mile freight travels before the port and the first mile from the producer. The configuration of the roads around many of our major ports and intermodal terminals do not support the use of high productivity vehicles. This creates a situation of more smaller and less efficient trucks on the road leaving the port/terminal which eventually results in higher end costs to the consumer than required, greater congestion on our roads and poor environmental outcomes.

The trucking industry estimates that if it was able to use high productivity vehicles for the entire length of the journey they could reduce the cost of freight by up to 50 per cent.

The use of rail to and from our ports is underutilised and leads to freight being moved primarily by trucks. Rail facilitates the most efficient movement of freight on land but rail lines are shared between passengers and freight, and the former is prioritised. Businesses choose to move their freight along transport modes that are less restrictive and comparatively more efficient again, resulting in more congestion on our roads.

Reading this you may think that I favour one mode of transport over another but that’s not true. I am a firm believer that for Australia to keep costs down we need to strive towards a more balanced approach towards our modes of freight. Trucks provide the flexibility our supply chain needs, rail the connectivity and shipping the capacity.

Coastal shipping, moving goods around the country by ship, could transform our ports from international gateways to regional ones as well. Any gains in connecting the port on the ground through road and rail are duplicated if we are using that port to service other parts of the country.

A recent story in the media pointed out that it cost a Brisbane-based manufacturing company as much to move its products 35km to the Port of Brisbane as it costs to then send the good 13,000 nautical miles to the United Kingdom.

The estimated net economic benefits of coastal shipping are close to $700 million and an annual reduction in regulatory burden of $21.4 million.

There are real opportunities in this country to increase the supply chain efficiency and lower the cost of living for Australians. The Federal Government has been working with industry and other areas of government to develop the national freight and supply chain strategy.

Our hope is that it isn’t just another document but a blueprint and brave vision for Australia’s future so that we can keep the costs down for all Australians and continue our lucky run.