A rapidly growing population has led a council in Melbourne’s west to use new real-time data and smart devices to respond to challenges on services and infrastructure. Wyndham City Council has taken the next step in its commitment to being a ‘smart city’, launching a new Internet of Things (IoT) sensor network.

The network, which involves the installation of sensors across council buildings, enables the council to access real-time data across a range of areas, leading to the transformation of processes, improved efficiency and lowered costs.

The Council has launched a partnership with Thinxtra — the Australian network operator for Sigfox — to implement the city-wide network.

Wyndham City Council’s Smart City Portfolio Holder, Councillor Aaron An, said the launch of the network would work as the backbone of the city’s future, making Wyndham a better place to live, work and visit.

“This network better positions Council in a number of areas. Initially, we will be using the technology to roll out smart devices for asset tracking, environmental monitoring and water management,” Cr An said.

“We’ll be able to access data in real time, allowing us to better understand the municipality and to more easily make decisions backed up by data.” 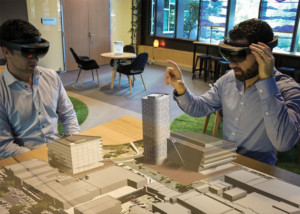 Cr An said looking to the future, the network has scope to provide information to respond to other issues across the municipality.

“The data can be used to address parking issues such as assessing usage and locating available parking spots.

“It also has the capacity to optimise our waste collection routes, with connected bins, saving time, energy and money, by allowing Council to gain an understanding of the level of waste in bins across Wyndham.

“Advances in technology and data analysis provide us with the tools to better understand the functioning of our city, and to plan and deliver services more effectively.

“The challenge is more than just how we improve our services, though. Technology development impacts the economy, the design of the built environment and even the relationship between residents and council.”

The IoT network is not Wyndham City’s first foray into the smart city space, last year it received international acclaim for its CityLens mixed reality application.

The project was a first for any government in Australia, using Microsoft HoloLens to allow users to view holographic plans of future developments.

Cr An said the technology allowed users to walk through plans and even view them in their future locations, helping to paint a much more realistic impression than traditional artist impressions.

“By using mixed reality and giving people a view of what buildings will look like in real settings, we can drive investment into our municipality and help residents better understand development plans,” Cr An said.

“CityLens has proven to be a game changer, picking up the 2017 National Award for Excellence in Local Government. Wyndham City also presented this project last year at the 2017 Smart City Expo World Congress in Barcelona where it was very well received.”

The team at Wyndham City is now moving forward to the next stage of CityLens.

“CityLens will be further developed, allowing it to be used to view live data such as pedestrian and vehicle traffic, air quality, water usage and other sensor-derived information. It will also be possible to use with other headsets like the HTC Vive, making it a truly revolutionary tool in local government,” Cr An said.

The Council is taking its community on the journey with them into the smart city space, hosting a number of events in recent months that included members of the community. In October, the Smarter Wyndham Community Challenge saw students and residents with an interest in science, technology, engineering and maths come together and form teams to solve challenges faced in the community by employing emerging smart technologies as solutions.

The Council is also developing its Future City Strategy to further harness the opportunities provided by digital technology, data and analytics. Cr An described the city-centric approach to create this key strategic work.

“This strategy will ensure technology, data and partnerships innovatively address our growth and infrastructure challenges,” Cr An said.

“But at the centre of this strategy is the citizen. Who they are, what do they want and what type of environment do they exist in.”

For more information on Wyndham City and its Smart City projects, visit, www.wyndham.vic.gov.au/services/smart-wyndham.