The $11 billion Metro Tunnel — the biggest public transport project in Victoria’s history — will take three of Melbourne’s busiest train lines through a new tunnel under the city, freeing up space in the City Loop to run more trains more often to and from the suburbs.

Sixty-Five High Capacity Metro Trains will operate on the new line from Sunbury in the west to Cranbourne/Pakenham in the south-east.

Once completed, the Metro Tunnel will benefit thousands of passengers travelling in and out of Melbourne’s CBD every day, and provide faster and easier access to key destinations including the Royal Melbourne Hospital and University of Melbourne in Parkville, and the St Kilda Road employment hub and Shrine of Remembrance at Anzac Station.

Construction techniques and learning from other projects

A key focus of the Metro Tunnel Project is engaging with the community and stakeholders on the design and construction of the five new underground stations. The Metro Tunnel has undertaken an extensive and robust public planning process. Environmental Performance Requirements developed as part of the public Environment Effects Statement planning process require noise and vibration levels to be monitored and appropriately mitigated throughout construction.

Comprehensive property condition surveys of heritage listed buildings and other properties are also being undertaken prior to Metro Tunnel works starting nearby. Throughout works, ongoing modelling and monitoring of the potential impact of construction activity is being undertaken.

As part of piling works in Parkville, we are also using cutting-edge technology to break back the piles, minimising noise and vibration. This method involves the use of an expanding grout to create a horizontal crack in the pile so that concrete can easily be removed by a crane, eliminating the need to use excavators and jack hammers during this phase of work. The Metro Tunnel Project has a track record of engaging with some of the largest transport infrastructure projects in the world, ensuring a best-practice design and construction approach is implemented.

We are learning from other major metro projects around the world, such as Crossrail in London, and implementing best-practice noise and vibration management.

The project also benefits from staff with a significant amount of overseas experience on rail projects in countries including Singapore, the UK, Hong Kong, India and Taiwan. Attracting this world– class experience to Victoria is not only shaping the Metro Tunnel but is helping to upskill the next generation of local rail experts to deliver future projects in Australia and around the world. 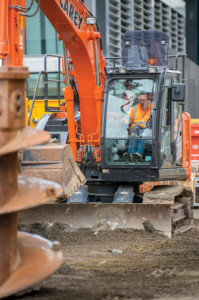 The Metro Tunnel Project is currently uncovering Melbourne’s rich history, with the largest archaeological digs in Victorian history over halfway complete and with more than half a million artefacts from the city’s past already unearthed.

A team of more than 100 archaeologists, students and community participants have painstakingly unearthed hundreds of thousands of artefacts from the heart of the CBD since the digs began in April, many dating back to the earliest days of Melbourne’s European settlement 180 years ago.

At the dig site directly beside the iconic Young and Jackson Hotel, finds have included an opulent jet earring — likely to have fallen from the ear of a wealthy lady through the floorboards of the Gippsland Hotel 150 years earlier — as well as ivory dice potentially used in the city’s earliest gambling dens and more than 1000 century-old human teeth tossed into the yard by a well-known early Melbourne dentist.

The digs at the State Library Station site on the corner of Swanston and La Trobe streets have revealed archaeological remnants of Melbourne’s pre-European settlement woodland, personal items such as elaboratively decorated smoking pipes and several artefacts closely related to the area’s distinct commercial and light industrial past.

The public can get closer than ever before to some of the most intriguing discoveries, with a collection of artefacts on display at the project’s dedicated visitor centre, Metro Tunnel HQ (125-133 Swanston St, opposite Melbourne Town Hall). The artefacts will be on display until later this year.

Early plans are underway for a full-scale exhibition once the digs are complete, with all items of significance to be permanently stored by Heritage Victoria.

A project of this size will create some unavoidable disruption. The Metro Tunnel Project and its construction contractors are working with local residents, businesses and the community to reduce impacts throughout construction.

Work to build an entrance at Federation Square for the new underground Town Hall Station has commenced with relevant approvals in place and will result in changes to traffic conditions for an extended period.

Flinders Street, next to Federation Square, is being reduced by one traffic lane westbound between Russell and Swanston streets for up to four years from October. As Federation Square sits over a working railway, the deck cannot withstand the weight of the massive machinery needed to build the station. Closing one lane allows crews to safely operate heavy equipment while traffic continues to flow.

Drivers still have one left-turning lane from Flinders Street into St Kilda Road, and one lane towards Elizabeth Street. Motorists have been encouraged to plan ahead and allow up to an extra 15 minutes if travelling through this stretch of Flinders Street.

Pedestrian access around the intersection and to Federation Square’s businesses, restaurants, cafes and bars is maintained. Bicycle access is also maintained, with the St Kilda Road bike lane realigned.

All works at Federation Square are being undertaken with the relevant approvals. Town Hall Station will make it easier for people to reach some of Melbourne’s key tourist destinations including Federation Square, St Paul’s Cathedral, Southbank, the Arts Centre and CBD shopping. The station will have a direct underground connection to Flinders Street Station, so passengers can connect seamlessly with City Loop services.

For more information about the Metro Tunnel Project, visit metrotunnel.vic.gov.au.