Smart Cities: the new paradigm for the places we live, work and play Our cities, and the way we live and move about in them, are changing. Thanks to new technologies, such as energy efficiency optimisation in buildings, interconnected transport modes and digitised utilities optimised based on actual consumption patterns, there are so many ways our cities can be smarter, better places to live.

Recognising this, Infrastructure recently hosted the inaugural Smart Cities conference, aimed at educating delegates about the latest technologies being deployed across all aspects of a city — from buildings to transport and utilities — and showcasing the ways organisations can work with related industries to maximise the benefits for residents.

The conference took place from 30–31 May at the Pullman Albert Park in Melbourne, and was attended by a cross-section of city makers, including federal, state and local government representatives; town planners; owners of critical infrastructure; product and service providers; and many more.

What distinguished this conference from others in the smart cities space was the incredibly high calibre of speakers who addressed delegates, sharing their expertise in a wide range of areas. 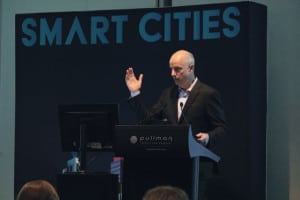 Kicking things off on day one of the conference was International Keynote Speaker, Mark Dowd, the Executive Director of Washington D.C.-based Smart Cities Lab. As the former Smart Cities Advisor to Barack Obama, Mark’s experience at the highest levels of government proved to be invaluable to delegates.

As well as providing the International Keynote, on day two of the conference, Mark hosted the “Council Challenge Roundtable”, where 20 delegates were able to work through some of their critical smart cities-related issues with Mark in an intimate setting.

Our Domestic Keynote Speaker, Vi Le, Stakeholder Engagement Manager at Standards Australia, was able to provide practical advice for delegates on the Smart Cities Strategic Roadmap that Standards Australia is currently developing. This roadmap is being developed in recognition of the increasingly important role smart cities-related technologies will be playing in Australia, and is aimed at identifying a framework for different levels of government to develop their smart cities strategy around.

Some of the topics covered in this session included the challenges of metropolitan versus regional councils, what councils need to do to develop a smart city plan that is truly cohesive, and the things councils should focus on over the next 12 months to best progress their smart city initiatives. 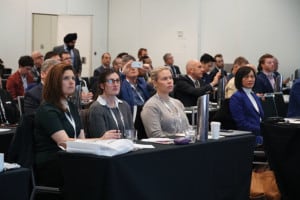 During the session The critical role essential services will play in smart cities, Tim Nichols, Product and Strategy Manager, Jemena Electricity Network; Michael Gomez, Manager – Asset Knowledge and Systems, Melbourne Water; and Jessica Higgs, Head of Strategy (acting), Ausgrid, discussed the impact smart cities technologies will have on the utilities sector. Panellists noted that in the cities of the future, users won’t just expect access to these services — they will expect their usage to be optimised, their customer experience to be enhanced, and their utility provider to help them be more efficient in their usage.

Our first afternoon panel, Easy, efficient, connected: a future blueprint for public transport, saw experts including Dr Frank Heibel, Director, Doc Frank Rail Services; Jeff Kasparian, Programs Director, iMOVE CRC; and Dr John Stone, Senior Lecturer in Transport Planning at the University of Melbourne discussing the changes we can expect to see in the transport sector of the future. They pointed out that the sector has a unique opportunity to transform the way people move around, and between, our cities, reducing reliance on roads as well as emissions.

And in Designing the cities of the future, Mark Burry AO, Founding Director of the Smart Cities Research Institute; Nicola Smith, Founding Director of Niche Planning Studio; and Sandra Qian, Senior Advisor – Policy and Government Relations at the Green Building Council of Australia led a discussion on how we can make our buildings smarter — from lighting to Building Automation Systems (BAS) in HVAC, elevators, access control, CCTV, lighting, water and energy systems. 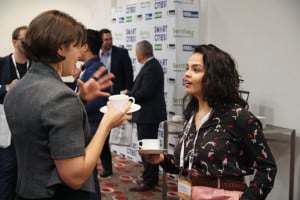 Connecting with the industry

One of the highlights of Smart Cities 2019 was the opportunities delegates had to network with colleagues in similar fields. As well as the informal networking opportunities offered during meal breaks, delegates also enjoyed two structured “speed networking” sessions, which allowed them to meet around 15 other delegates during the two-day event.

Delegates from digital and technology related companies were also there to showcase the latest innovations in the sector, helping delegates gain a better understanding of how to integrate digital solutions within their organisation.