The knowledge gap for cranes and precast construction The modernisation and streamlining of building construction methods in recent years, particularly of warehouses, has seen precast panel erection become one of the more common jobs for cranes and crew. There has also been a boom in residential development on the east coast of Australia with construction of medium size apartment dwellings using precast concrete because it is cost-effective and expedient.

Precast concrete is an alternative to cast-in-situ concrete, but lifting precast panels is particularly hazardous for a number of reasons including the weight of the panels, a requirement to rotate the panels in mid-air, high repetition and the necessity for workers to be near to attach props to support the panels temporarily, once erected. Each new panel is placed next to the last, so the amount of available space is reduced.

The Crane Industry Council of Australia (CICA) is the national peak industry body for the crane industry. CICA liaises with crane owners, hirers, operators, government and regulatory bodies as well as other establishments affiliated with cranes and their uses. CICA aims to: John Humphries, CICA’s Safety Liaison Officer, publishes monthly safety bulletins that address hot topic safety issues for crane owners, hirers and users. In the recent Safety Bulletin 245, John discussed a research paper from Monash University that evaluated causal and shaping factors attributing to fatalities in the crane industry. The paper highlighted root causes such as ‘physical site constraints’ and types of incidents such as ‘struck by load’, which refers to loads falling or becoming dislodged and has a very high representation of precast panels, beams and concrete loads.

CICA has identified an ‘industry knowledge gap’ in the first paragraph of the Crane Safe Use standard AS2550.5-2016 Clause 6.10.1, which states, “Where both the main and auxiliary hoists of a single mobile crane are to be used simultaneously to lift a load (e.g. for tilt-up concrete construction), a lift procedure shall be prepared.”

This clause outlines a requirement to develop a lift procedure for multiple hoist or crane operations. The terminology used in the example “tilt-up concrete construction”, however, is not accurate and has been a cause of confusion in the crane industry.

AS3850-2105 is the Australian Standard applicable for the construction of buildings, this standard is currently being extended to cover prefabricated concrete elements used in civil and other constructions. “Tilt-up” as defined in AS3850 means a method of lifting a prefabricated concrete element from a horizontal to a vertical position, by rotation about one edge. The use of “tilt-up” only has meaning for elements rotated from a horizontal position (e.g. in the casting bed or mould) to the vertical position either for transport, storage or more commonly for erection in-situ for site-cast panels. As shown in Image 1 from AS3850, this operation only requires one hoist for the lift, it does not require multiple hoists for the operation.

In many situations, multiple hoist or multiple crane lifts are required for flat panels that need to be manipulated for erection by in-plane rotation in mid-air, whilst freely suspended from a crane or cranes. An example of the rotation of a flat panel using inserts located in its edge is shown in AS3850 Figure 2.6. 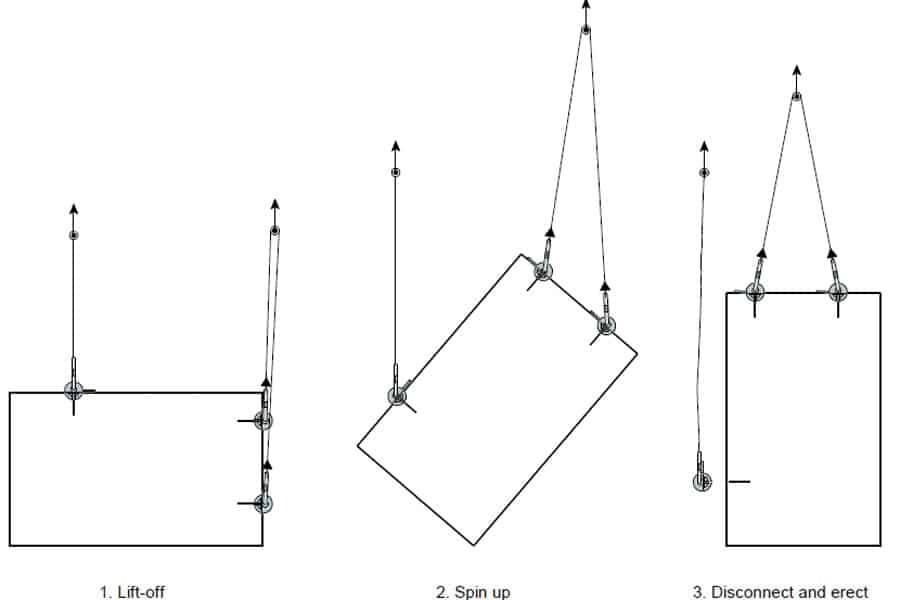 According to the definition in AS3850, this type of lifting is not “tilt-up”. The example used in AS2550.5 Clause 6.10 is not appropriate for the content as the actions defined for “tilt-up” only require one hoist to perform. To close the knowledge gap, CICA’s Technical Project Engineer, Alice Edwards, is working with the standard development committee to put in an amendment to AS2550.5 to clarify this issue.

When two industries cross over — in this case the crane industry and the precast construction industry — there is a potential knowledge gap. To deal with this more broadly, Tom Clark, National Technical Safety Advisor at Fulton Hogan, has been working on behalf of CICA to introduce a precast Australian Standard for construction materials.

He said, “As precast concrete element use continues to grow in building and infrastructure construction projects, industry has identified the knowledge gap in proper use and crew training. Standards Australia is working on guidance material for design and use of concrete elements specifically used in infrastructure projects. The drafting committee has taken a practical approach to make the standard ‘user-friendly’ through common language and reflective of the safe practices that industry has initiated. The draft will be released later in the year and public comment is welcomed to make the standard a useful document.” Another challenge of precast panel erection is the reliance on the quality of the casting of which a crane crew has neither the control nor visibility to detect. A concrete panel needs adequate time to set before it is lifted, or it may fracture and fall from the hook through no fault of the crane crew. The lifting inserts cast into the panel pose another challenge, and if not cast properly with correct reinforcement have the potential to fail.

The crane, rigging and clutch are powerless to stop a panel from falling if the insert in the panel itself fails. For this reason, panels, when delivered to site, need to have paperwork, commonly known as a ‘Birth Certificate’ which provides evidence that a panel has had the required time to cure.

Precast concrete construction has many advantages, and greatly reduces on-site time and expenses. With the advances in this type of construction, however, careful consideration needs to be given to the ‘wrap around’ industries so that their safety practices and plans are informed and not playing ‘catch up’.

Cranes are essential to the installation of precast and as they are required to operate over the entire building volume, the care and time taken by cranes and crew to plan the lift of each piece and shift it to its final position is critical in determining that safety is not trumped by construction schedules.