During baseline corrosion interference testing associated with a new light rail project in Sydney NSW, significant stray traction current effects from existing traction systems were measured on the Energy Authority’s sub-transmission assets in the Sydney CBD. This case study describes the actions taken to identify the corrosion risks and the events that led to resolving the electrolysis interference caused by defective rail safety devices located 20km away from the affected site.

The electrical current needed for DC traction systems is supplied by traction substations which are normally fed from the local electrical network. In overhead networks, current is supplied to the train or tram traction motors through an overhead catenary contact wire and in a catenary free arrangement, via a third rail or underground cables.

The running rails are intended to be insulated from earth; however, since their associated insulation medium is not perfect and is in contact with the general mass of earth (rail pads, ballast, embedded insulation etc.) a parallel path through the earth is formed with the running rails. Any current that leaks from the rails and conducts through any path, other than the dedicated return path, is known as stray traction current. Where stray traction current flows through a conductive structure such as pipelines, cable screens, building reinforcement etc. they are referred to as foreign structures. These structures are at risk of accelerated corrosion (see Figure 1). 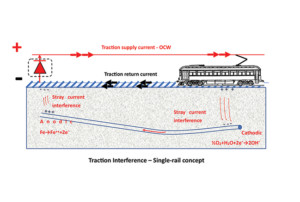 Transport for NSW released a project to design and construct a new 12km-long light rail (LR) from Circular Quay along George Street to Central Station, with branches to Kensington and Kingsford.

Ausgrid is the energy utility that provides the electricity network for Sydney and had numerous assets that are located alongside and beneath the proposed route of the LR. These assets include underground cables ranging from low-voltage distributors to high-voltage sub-transmission feeders (Figure 2), substations both above and below ground and associated buildings and ancillary equipment. Various other assets such as telecommunication networks and pipelines share the same environment with the electrical network. All of these assets are vulnerable to accelerated corrosion when exposed to stray current. There are no formally recognised interference criteria for copper structures that are not protected by cathodic protection systems, so the following standards were used to derive criteria for assessment purposes only.

Various sites were targeted along the route of the LR, for baseline corrosion interference testing. Baseline testing provides a snapshot in time of any existing stray current effects detected on targeted assets. The sites were selected on the likelihood of being affected by stray current once the LR is commissioned, so that a comparison could be made before and after energisation to determine if any corrosion interference was introduced from the new LR.

One particular asset where elevated levels of existing stray traction current effects were measured, was an earthing link box associated with a 132kV sub-transmission feeder running under George St near Circular Quay (Figure 3). This link box forms part of the cable screen circuit. Structure voltage measurements were taken with reference to a copper/copper sulphate reference cell and it was determined that the link box earth has a quiescent potential of approximately -273mV. The stray traction current effects were causing voltage variations up to 290mV as shown in Figure 4. 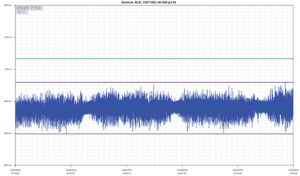 These results warrant further investigation. The measured wave forms were typical of stray traction current effects, so Sydney Trains participated in the investigations to determine if the heavy rail was contributing to the issue.

Experience has shown that where stray current enters or exits a structure through the earth, larger earth potential rise (EPR) zones – caused by increased current density through the earth – are created that result in high structure potential variation, also referred to as electrolysis or stray current effects. So the first step in resolving this issue was to locate the maximum electrolysis effects along the 132kV feeder route.

The largest magnitude of interference was located on an earthing link box at Wollstonecraft shown in Figure 5, some 3.5km north-east of the George St site where the original problem was observed.

The maximum positive potential shift from the quiescent potential is +1166mV, which far exceeds the limit of +300mV as derived from BS EN 50162.

When applying the derived criteria BS EN 50162, these assets are considered at risk of accelerated corrosion. In addition to Ausgrid’s concern for the elevated corrosion risk to critical assets, added pressure was applied from the LR project designers to find a timely resolution so there would be some interference head room available by the time the LR was to be commissioned.

Since the heavy rail network is located in the same vicinity as the link box, an investigation was conducted by Sydney Trains to locate and repair any rail insulation defects. Results from the extensive investigation by Sydney Trains, spanning from the North Sydney area through Sydney CBD to Central Station, failed to reveal any underlying issues.

Concurrently with the Sydney Trains investigation, Ausgrid’s electrolysis team conducted DC current and loop resistance measurements at various substations connected to this particular 132kV feeder cable and a number of interconnected substations that supply the Sydney Trains Traction Substations. DC current was detected in all cable screens tested and in some cases recorded 6A variations in DC current flow.

These test results with visual inspections confirmed that Ausgrid’s sub-transmission earthing network is directly bonded to Sydney Trains Traction Substation earthing systems, which explains the likelihood of stray current flowing through the cable link boxes. This is a concern, since the traction substations are generally located within the rail corridor and exposed to a greater risk of stray current pickup and discharge, which can then be transferred through Ausgrid’s electrical network.

In summary, the electrical network provides a conductive path throughout Sydney that reticulates into the rail corridor at numerous locations and is an attractive path for stray traction current.

At this stage, we suspected that the source of the stray current may be much further afield than first thought, which added to the complexity of actually finding the problem and resolving it in time for the new LR energisation. Typically the corrosion risk is greater at locations where foreign structures are electrically discontinuous and not necessarily close to the rail corridor. Some months later, we experienced a fortunate breakthrough. During routine interference testing of a cathodic protection system for Telstra cables located in Wahroonga, high magnitudes of stray traction effects were measured on numerous assets affecting Telstra, Ausgrid and Sydney Water.

The cause for the stray traction current was found to be seven defective safety devices (spark gaps) in the vicinity of Wahroonga Rail Station. The safety devices had failed by short circuiting that effectively provided a low resistance path from the rail to earth via the rail structure earthing system, which resulted in large magnitudes of stray current flowing through any conductive earth path.

If the local water pipes, telecommunication cable network and electrical earthing network – including traction substation earthing systems – can collectively provide a continuous metallic path from outer North Sydney to Sydney CBD and beyond, then it is possible for stray current to be transferred significant distances to return to the source traction substation. Armed with this notion, it was worthwhile assessing the electrolysis effects at Wahroonga once the spark gaps were rectified.

Recorded waveform traces indicate that the link box earth has a quiescent potential of approximately -355mV, the stray traction current effects are causing voltage variations up to 599mV comprising of 316mV anodic and 283mV cathodic events.

When comparing these results with the structure potentials prior to replacing the safety devices, the stray traction current effects at Wollstonecraft have greatly improved. Although these levels indicate further issues to be resolved, it addresses the immediate threat to both Ausgrid assets and progression of the LR project. It is expected that similar reduction of electrolysis effects will be achieved on assets in Sydney CBD, which will be confirmed at a later date.

This result proves that stray current effects can be detected many kilometres from the defect site and is not restricted to within the rail corridor; it simply comes down to Ohm’s Law that determines the paths of lower resistance that the stray current will take to complete the circuit. 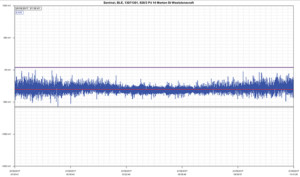