A collaboration between the Australian Nuclear Science and Technology Organisation (ANSTO), Australian universities, and the NSW Government will see new laser technology used on the 90-year-old Sydney Harbour Bridge to deal with corrosion and material degradation.

There is probably no other structure in Australia that enjoys the same iconic status as the Sydney Harbour Bridge.

This steel feat of Australian engineering has stood over Sydney Harbour for nearly 90 years, enabling billions of car and train journeys, millions of postcode pictures, and one more ‘tall thing’ that people can climb.

But there is a side of the bridge most people won’t see; experts in engineering will know that cleaning the bridge is a daily operation, and the reason why ‘The Coathanger’ is still safe to travel on after almost a century of use.

The number one enemy of steel structures

Of course, we don’t mean cleaning with a mop and soapy water; the number one enemy of any steel structure is corrosion. It is crucial to the long-term structural integrity and conservation of a structure like the Sydney Harbour Bridge to remove the by-products formed on its surface from corrosion.

Current conservation work involves sandblasting dirt, rust and the existing lead-based paint, and applying lead-free paint to protect the structure. However, a team of Australian experts are working on a better way using, of all things, nuclear science.

The team is led by Professor Andrei Rode and Associate Professor Steven Madden and represents an exciting opportunity for Australia to make its mark in infrastructure expertise internationally. With funding from the Australian Research Council, the project will run for three years in the hope of getting ahead of the war on corrosion.

The task is to develop a method of cleaning inaccessible areas of the bridge such as, for example, more than 7.2 kilometres of tunnels too small for a person to clean. Naturally, those hard-to-reach areas are susceptible to rust and dirt build-up, which left untreated can quickly cause bigger and more expensive problems.

Sandblasting, a technique which works exactly how it sounds, uses abrasive materials to remove paint and corrosion. It is the crucial first step to properly restore and conserve any steel structure and for a massive structure like the Sydney Harbour Bridge, it is a very practical challenge to clean the entire thing – all 134 metres tall and 1,149 metres wide – every nook and every cranny.

What is now being proposed is the use of new industrial, ultrafast laser technology to develop laser removal processes and reconditioning methods to maintain the integrity and original view of the bridge. Although laser cleaning is used widely in conserving historic architecture, it will be the first time this type of laser has been used on an industrial scale problem. Over the next three years, researchers will work on applying lasers to remove layers of paint efficiently, without damaging the underlying structure.

It won’t just be a first for the Sydney Harbour Bridge, but a world-first that when proven, could contribute to making structures safer, reducing maintenance costs and improving our environmental impact by saving energy. 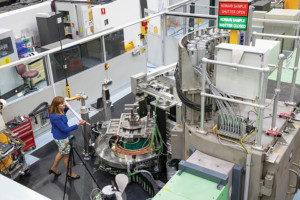 What’s so great about laser technology?

Firstly, new techniques using lasers could prevent a multitude of damages that steel is susceptible to, actually making it stronger by reducing residual stresses, micro-cracking and roughening that decreases performance and integrity.

Naturally, by creating a stronger and safer bridge, we also create savings on maintenance costs. This technology could potentially save millions of taxpayer dollars in a number of areas including efficiencies from the technology itself: laser techniques are better suited to cleaning in tight spaces than sandblasting, as it creates minimal dust which then also needs to be removed. It is also a gentler and environmentally friendly way of preserving the steel and granite stonework.

Not only would this new technology be more effective, it would also be more energy efficient: this new class of powerful lasers reduce heat load to a structure which reduces energy costs. It also removes thick layers of paint with efficiency at a large scale.

Because the task is to clean areas that are inaccessible to humans, robots have been used on the famous Coathanger for at least six years and the additional use of lasers will continue to make this work safe for humans, while delivering improved outcomes for the bridge.

The laser cleaning regime will involve robots performing inspections, on-ground cleaning painting and waste removal. With these improved cleaning techniques, those areas that are hard to reach can be cleaned more thoroughly and more frequently, improving overall safety.

ANSTO is leading the investigation into the mechanical properties of laser-treated steel and granite, lending its expertise through the Australian Centre for Neutron Scattering (ACNS), and the Nuclear Materials Development and Characterisation (NMDC) group.

Experts at ANSTO will undertake stress assessments on materials using X-rays and neutron diffraction techniques. The ACNS is the leading facility in the Asia Oceania region, and is home to 15 rare neutron beam instruments that help determine the internal structure of materials and their properties better with nuclear science.

The instruments used by ANSTO will analyse mechanical properties of laser-treated steel and granite. This work will be critical to understanding fatigue resistance, roughness, microstructure, and distribution of stresses. If the project is successful, it could be used to maintain the entire bridge, including regular paint and rust removal from the exterior of the iconic steel arch.

Successful application of this technology could have much wider implications than the Sydney Harbour Bridge; wherever large-scale corrosion exists, this laser technology could reduce maintenance costs and improve overall safety for bridges across the globe.

In that sense, it is only fitting that this Australian project starts with its own iconic bridge at home before possibly applying this technology to the thousands of bridges faced with similar cleaning problems across the world.

It is exciting for ANSTO to lend its expertise to this significant research, as part of an all-Australian effort. We look forward to the results, which will contribute to the current body of scientific research that exists regarding laser applications to corrosion and hopefully shine a light on Australian innovation and expertise in this field.