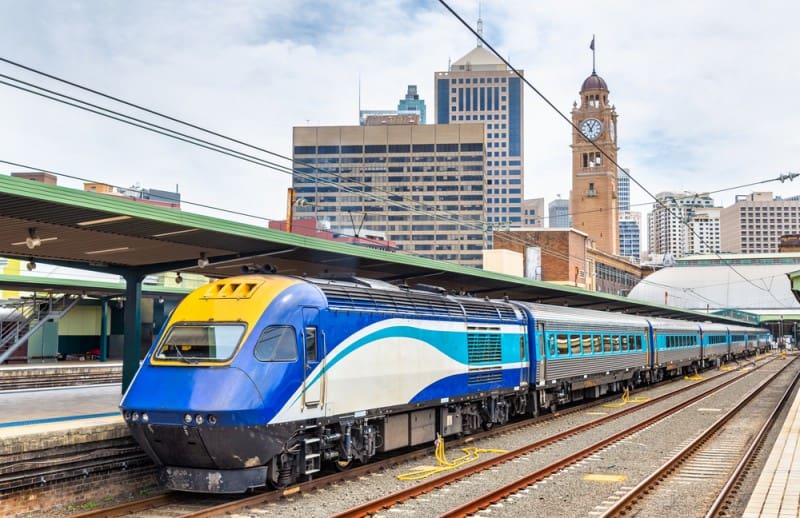 Mobility is an essential requirement of a modern society. Yes, a lot is happening online these days and the internet replaces the need of going to brick-and-mortar retail stores increasingly often. However, personal contact between people remains a major aspect of life, for social interaction, education and business transactions alike.

It is not hard to predict that passenger transport will have its place in the future, and its importance is likely to grow with the expectations of people who want or need to travel.

As much as people in Australia cherish travelling by car, in many cases this will no longer be sustainable, nor efficient. It is already incomprehensible that a business traveller would take a car between Sydney and Melbourne for a couple of meetings. Time is of the essence and air travel is clearly the fastest and hence most efficient transport mode over such a distance.

Over shorter distances, the growing congestion of the road network within and into the city centres is a major impediment for efficient transport. Melbourne, for example, keeps a meticulous count of the number of road lanes into the city, with clear visibility of capacity limits that are being rapidly approached or already reached.

And they know full well there are no road options which might suffice to cope with the projected population growth of that city.

Guided land transport, traditionally provided by railways, is known to be an efficient and ‘green’ alternative to road transport. The more road congestion slows down car travel into the city, the more attractive railways will become as a commuting option – provided that railways meet the requirements of commuters.

Looking at those requirements for different ‘use cases’ for passenger transport in Australia (and arguably most other first-world countries), it appears there are three major trends forming the pillars of a national scheme for moving large numbers of people with an efficiency that road travel can no longer provide.

One of those three pillars addresses commuter travel in and around the centres of Australia’s big cities. The second pillar provides a solution for connection of those cities to regional centres not too far away from the big city. And the third pillar aims at connecting the big cities over the significant distances they are apart from each other.

The trend for rail transport in Australia’s cities can be summarised in one word: Metro. We all know instantly of examples for metro railways around the world which make travel in and across the respective city a breeze.

London, New York, Paris, Singapore and an almost uncountable number of cities in China are but a few examples of nearly 150 cities worldwide counting on metro railways for mobility of their people.

It is a simplifying but nonetheless valid statement that world-class cities have metros. So where does that leave us in Australia?

Today’s commuter railways in Melbourne and Adelaide are already called metro, but let’s face it they do not have much resemblance with the ‘real’ metro of the likes of Singapore or Hong Kong, to name just a couple of nearby benchmark examples.

The first genuine Metro emerging in Australia is Sydney Metro. As the first driverless passenger rail service in Australia, Sydney Metro has been modelled to be precisely like its high-capacity cousins overseas.

The planning for the rapidly growing network of Sydney Metro is as from a textbook – segregated lines with interchange stations to connect between metro lines and with Sydney’s existing suburban and intercity rail networks.

Well, not every city in Australia wants to afford building an entirely new rail network to call metro. Nor would metro be a term reserved for railways only (hence my use of the term ‘guided land transport’ rather than ‘rail transport’).

Brisbane Metro is planned to use articulated multi-section vehicles on rubber wheels, and the purists and critics fall over themselves to dismiss it as “just a bus”. But firstly, who pays for it is free to choose the name. Is the Melbourne Metro a ‘genuine’ metro network?

Secondly, Metro is at least as much about service quality as it is about the material of the wheels. There are many examples of ‘light metro’ where trains have comparable capacity to the planned vehicles in Brisbane, and don’t forget that Paris has been running parts of their famous metro with trains on rubber wheels for decades.

The existing suburban rail networks in all major Australian cities, including the ones in Sydney and Brisbane despite the metros introduced there, need to up their game too in order to cope with growing patronage demand.

All four biggest cities are introducing advanced signalling and train control technologies such as Communications-Based Train Control (CBTC) in Melbourne and Perth or the European Train Control System (ETCS) in Sydney and Brisbane. They do that to boost their achievable transport capacity without the (often impossible or unaffordable) need to build additional railway corridors for capacity relief.

This will require major operational change, and the side-by-side comparison between Sydney Trains and Sydney Metro is a highly instructive case study where railways in Australia will go in the future. And that should not be reduced to the ‘threat’ of driverless trains alone.

The city rail networks in Australia are already quite expansive, with some lines reaching up to 70km out of city centres such as the Mandurah line in Perth. But there are many instances of regional centres that are considered too far out to be included in the existing suburban rail network of the nearest city.

Some examples include Newcastle, Wollongong, Geelong, Ballarat, Bendigo, Toowoomba, the Sunshine Coast and Bunbury. Those regional centres all have railway connections to their nearest city, but these railway services are usually too slow and stop too often on the way to provide a travel option more attractive than the car.

The transport task in this case is different than for city metros. A metro is about efficient connection between many suburbs and precincts, requiring many relatively close stops. Short journey times are achieved by shorter journeys and very short wait and transfer times due to high service frequencies.

This is very different from the efficient connection between cities and regional centres where a large number of stops would spoil journey times and hence the desired efficiency of travel.

The solution here, labelled as ‘Regional Fast Rail’, is the reduction of stops compared to existing regional services, the increase of line speed and potentially the straightening of the rail corridor, all to provide more attractive overall journey times.

That would not just allow the regional centre to become a meaningful ‘satellite’ for the major city but would also support strengthening of regional business by attracting increased travel from the city.

Besides Metro, Regional Fast Rail is the second major trend in passenger land transport in Australia. The Federal Government has set up the National Faster Rail Agency to support this trend by co-funding business cases and potentially later implementation, and increasing portions of state governments’ transport funding begin to flow in that direction. Pillar #3 – The dream of high speed

For the third pillar of passenger land transport that is to connect between the big cities, it is paramount to define the transport task correctly and then identify the best option in response to that task.

It is not productive for this debate if people come back from holidays in places with existing high speed railways such as Japan, France or Italy to name just three popular of such destinations, and then demand loudly that Australia should have the same to connect Melbourne, Sydney and Brisbane.

A couple of points why such thinking is flawed, particularly when aiming at existing air travel passengers for the main patronage of high-speed rail.

One, the foreseeable top speed for conventional high-speed rail will be around 400km per hour which over the large distances between Melbourne, Sydney and Brisbane does not provide for journey times suited to attract large portions of airline passengers.

Two, every stop along the way will amplify that journey time problem. And make no mistake, there will be stops and be it just for political viability (think Canberra).

The solution for city-to-city connection can take two possible turns. For large distances as per today, say upwards of 800km, the solution would have to be Very High Speed which could not be provided by traditional high-speed railways.

Alternative technologies must be considered, as one would expect for any business case towards an once-in-a-lifetime investment which will take at least 20 years to become reality. Magnetic levitation technology, or short Maglev, has proven higher speeds than achievable with railways, but they seem to max out at around 600km per hour.

This is better than rail, yes, but still worse than air travel which sits between 800 and 1,000km per hour for the plane types typically used between Australian cities (and no stops, remember).

An emerging alternative could be Hyperloop, which improves the Maglev solution by eliminating air resistance inside a vacuumed tube. Hyperloop promises travel speeds of 1,200km per hour which would make the journey times comparable with air travel, even with the odd stop underway.

That technology may be in its infancy today but several in-service applications are expected within the next ten years and Hyperloop is likely to be an established and mature technology by the time we would have completed a high-speed corridor Melbourne-Sydney-Brisbane.

To put it bluntly, a technology which is championed by the likes of Richard Branson or Elon Musk should not be written off prematurely.

The other option is to amend the transport task, away from mere point-to-point connections between the three largest cities. One of the plans for coping with Australia’s long-term population growth is the creation of new cities as ‘infill’ between today’s metropoles.

Such infill would make the distances between places of significant patronage much shorter than today, in which case high speed rail could be a viable solution. But even then a prudent business case would have to consider modern technology alternatives such as Maglev or Hyperloop.

The above three pillars will keep forming a comprehensive and sustainable system for passenger land transport in Australia. The different services will be interconnected and hence complementary as it can already be observed in the network service developments in Sydney and Melbourne.

The downside of this planning is that it will cost a lot of taxpayer’s money to implement. While mobility is clearly important, transportation is by far not the only focus for government funding. Therefore it can be expected that capital investment focuses on areas with the biggest and most obvious benefits for large numbers of taxpayers.

In that regard, the above numbering of pillars can be seen as a ranking for investment priority. Metro initiatives like the one in Sydney are well underway with significant ongoing investment commitments. Regional Fast Rail will provide the next highest benefit, particularly as the big cities outgrow their feasible footprint. This means that Very High Speed connections will inevitably fall behind.

The best way forward there would be to define the transport task clearer, either end-to-end between existing big cities or as connecting network between existing and future cities over much shorter distances. Once that is done, securing a corridor is prudent to prepare for the time a Very High Speed network might actually be built.

‘Doc Frank’ Heibel is a leading strategist, thought leader and educator on high performance railways and specifically high performance signalling technologies such as CBTC and ETCS. He has been sharing his knowledge generously on social media and conference presentations, and his iconic ‘Kickstarter’ training courses have educated hundreds of rail professionals about the merits of advanced signalling technology.