Infrastructure outlook: 2020 and beyond It’s a new year and a new decade. For infrastructure, the 2020s offer substantial growth opportunities and challenges after a bumpy 2019. 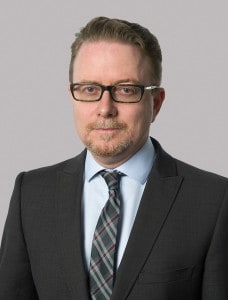 Economic infrastructure (or engineering) construction activity – measured as the sum of transport, utilities, mining and heavy industry construction – declined in 2018/19.

Some of this decline was expected, particularly in mining and heavy industry, where oil and gas activity normalised following a burst of completion works on LNG projects the year before. But there were also some surprises.

Road construction activity fell earlier than anticipated as major projects that were started soon after the resources investment bust began to wind down without being completely replaced by new projects. Rail activity grew marginally, after nearly doubling in the previous three years.

While there may yet be more surprises in store, I’d like to point out some of the bigger trends we have identified and what this means for businesses (and government agencies) that operate in the infrastructure market. Overall, we believe activity picked up further in the December quarter and we are forecasting total activity to rise through 2020 and the subsequent few years, with both private and public sector investment contributing.

As shown in Figure 1, there is still a significant wave of major transport infrastructure being rolled out across most states and territories that will likely drive higher levels of road and rail construction.

It may not end sharply later in the decade either as this is just the projects which are known now, but more are likely to emerge in coming years.

The biggest risk to this pipeline is not funding or finance but, rather, industry and government capacity, and the capability to procure and deliver megaprojects simultaneously.

Meanwhile, rising minerals investment (the value of coal and other minerals commencements rose 37 per cent to $18.5 billion in the first half of 2019) will also drive higher engineering activity and add to this capacity/capability challenge.

By contrast, telecoms is likely to be one of the worst performers as NBN activity (Australia’s largest public investment project) starts to wind down from peak construction levels.

While NSW and Victoria have been the ‘boom’ states for growth in engineering construction activity over the past few years, Western Australia is expected to see the strongest growth in work done during 2019/20.

Both Western Australia and Queensland are expected to be the strongest performers in growth terms over the next three years.

This reflects both the high levels of activity already occurring in NSW and Victoria (which is not expected to ease), but also a recovery in private (i.e. mining-related) and public investment in the ‘resource’ states.

4. Droughts and bushfires present short-term and long-term impacts for infrastructure

The worsening drought and bushfire conditions saw 2019 end – and 2020 begin – on a terrible note, with regional communities and towns devastated, and lives and property lost. In the immediate term this is having a negative impact on infrastructure and economic activity.

But, as any economist (‘dismal scientist’) will tell you, disasters are usually followed by a pickup in economic activity as rebuilding eventually gets underway.

Already, Federal and state governments have committed billions of dollars for reconstruction in affected regions, with fire-damaged roads, rail, electricity and telecommunications infrastructure (along with residential and non-residential buildings) the most likely target in 2020.

The increasing severity of the drought can also be expected to drive stronger investment in water infrastructure, including rebuilt or new reservoirs, weirs and dams, pipelines and network fixes, and expanded desalination capacity in coastal cities.

But there could also be positive longer term infrastructure and economic impacts if we get the policy right.

Increasingly, there is a need for governments to recognise how climate change is affecting the frequency and intensity of drought and bushfire events, and how we respond in ensuring safe, resilient communities and a sustainable economy.

Energy policies consistent with greenhouse gas emissions targets that prevent dangerous climate change are likely to open up a swathe of new investment in renewable generation and storage (which will be required in any case to meet future closures in coal-fired generation capacity).

The National Electricity Market will require greater flexibility to deal with increasing risks by installing more interconnectors between regions and generally strengthening the transmission network in regional areas – which will also provide the capacity required for investment in regional generation projects.

Climate change considerations should also drive a rethink of our long-term investment choices in transport, water, communications and buildings to foster a transition to more resilient and less carbon-intensive systems and assets, offering further economic and social benefits.

While a correction in residential building is expected to play out across 2020 and 2021, all construction segments are likely to be in ‘growth mode’ again by 2021/22, as shown in Figure 2. 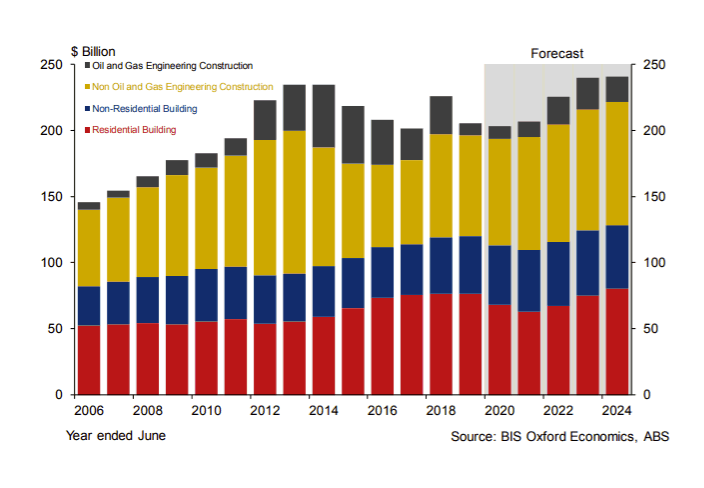 Recent work by BIS Oxford Economics for government agencies and the private sector indicate that this synchronised upswing in construction activity will present serious challenges for capacity and capability.

For some sectors, such as rail, skills shortages for key occupations are already critical and this will become worse as construction activity rises sharply over the next few years.

STEM skills shortages are likely to worsen across a range of sectors including mining, energy, transport and defence as new investment – and the ongoing maintenance and operations task – continues to rise.

Meanwhile, risks are also rising for the availability and/or cost of construction materials and equipment.

This means that businesses and governments at all levels need to look to securing the skills needed to deliver as conditions improve through the 2020s.

This involves setting ambitious education, training and upskilling goals at the project and industry level so that local job opportunities, and a skills legacy for future infrastructure development, are maximised.

It also means being aware of risks in terms of costs and cost escalation for other construction inputs.

Governments and industry need to be better at forecasting cost growth and input risks to avoid project cost blowouts or failures.

Given the long lead time needed to establish new capacity (whether in skills or other inputs), strategic decisions need to be made now to plan and build capacity and capability to meet what is likely to be a ‘new normal’ in infrastructure investment.

Finally, governments will need to think outside the box in terms of how infrastructure is funded, financed and procured over the long term, and how the infrastructure pipeline is managed.

In all of this, there are several positive policy developments that indicate that leaders in government and industry understand the nature of the challenge.

Success, however, may lie in the execution.

Adrian Hart has 20 years of economic analysis and consulting experience with BIS Oxford Economics, focusing on the infrastructure, building, maintenance and mining industries. Adrian has undertaken a wide range of consultancy projects for the public and private sector based on his detailed understanding of construction, mining and maintenance markets; their drivers and outlooks; the range of organisations operating in this space and the issues they face. This work includes deeper industry liaison, contractor and competitive analysis, pipeline analysis, demand and cost escalation forecasting, and capacity and capability projects for the public and private sectors. He also undertakes briefings and workshops for senior management, board members and industry associations, and facilitates and chairs roundtables between government and industry. Adrian holds a first class Honours degree in Economics from the University of Sydney.