Infrastructure Australia has released its 2020 Infrastructure Priority List, highlighting a pipeline of 147 critical initiatives worth more than $58 billion.

For the first time, the 2020 Priority List has a special focus on environmental issues including disaster and climate resilience, water, waste management and coastal inundation. 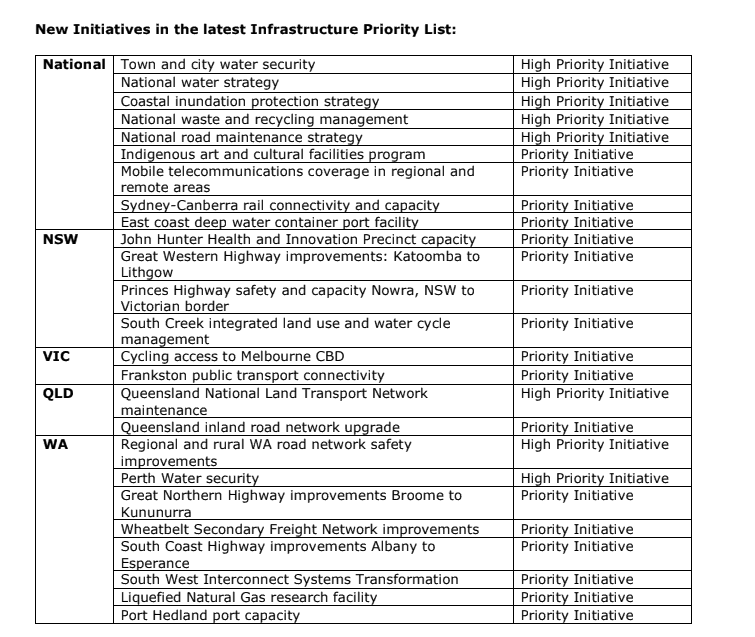 Each ‘initiative’ on the Priority List represents a proposal that Infrastructure Australia has determined have the potential to address a nationally significant problem or opportunity.

Infrastructure Australia includes them on the Priority List to indicate that further development and rigorous assessment of these proposals is a national priority.

“Resilience was a key theme of our 2019 Australian Infrastructure Audit and this focus continues to be reflected in our latest edition of the Infrastructure Priority List,” Ms Madew said.

“Compounding issues of unprecedented infrastructure demand, severe drought and other environmental changes, require a focus on our resilience strategies and a consensus on where to invest now for our nation’s future prosperity.”

“As an independent advisory body, it’s our role to bring these problems and opportunities into the national spotlight to spark investment and coordinated action from industry and government,” Ms Madew said.

“In response to this call to action, we’re expecting a range of solutions to be considered for capturing, managing and distributing water, along with improvements in reporting and use of data in the water sector,” Ms Madew said.

Regional Australia also emerged as a focus of this edition of the Infrastructure Priority List with a call to improve mobile telecommunications coverage in remote areas and improve regional road safety.

“Staying connected requires not only safe and efficient transport options, but also ensuring our towns and regional communities have the same access to telecommunications as the rest of Australia,” Ms Madew said.

“This is to also provide people with reliable access to electronic payment systems, emergency alerts, technology innovations and other critical services.”

“The Priority List has a strong record of driving national investment and has become a key reference point for all levels of government,” Ms Madew said.

“This year alone we have seven infrastructure projects graduating off the list as they enter the delivery stage.” ALC CEO, Kirk Coningham, said experience has shown that inclusion on the Infrastructure Priority List can be a catalyst for securing investment in critical projects and progressing initiatives vital to Australia’s economic interests and enhancing the liveability of the nation’s communities.

“IA’s rigorous, independent assessment process means governments, investors and the wider community can have confidence that investing in the projects and initiatives contained on the list will address genuine economic and social needs,” Mr Coningham said.

“The National Freight and Supply Chain Strategy, first included on the list in 2016, is an obvious example. ALC is pleased the Strategy remains as a High Priority Initiative on this year’s list, with a renewed focus underscoring the importance of its implementation phase.”

Mr Coningham said it was especially pleasing to see a high degree of alignment between projects and initiatives contained on the Infrastructure Priority List and priorities reflected in the National Action Plan associated with the Strategy.

Among these priorities are:

“ALC also welcomes the inclusion of new freight-specific projects on the list for 2020, including the Peak Downs Highway Realignment (QLD) and the Bindoon Bypass (WA), both of which will enhance freight connectivity, efficiency and transit times,” Mr Coningham said.

“As ALC and industry groups have previously observed, this objective can only be fully realised if the NSW Government reinstates dedicated access ramps for heavy vehicles at Canal Rd in the design for the project.”

The rail sector has praised Infrastructure Australia’s support of continued rail investment, highlighting that the industry must establish this record funding as the new norm in order to meet the nation’s growing infrastructure needs. Rail additions to the Priority List this year include Gold Coast Light Rail Stage 3A as a priority project and Sydney-Canberra rail connectivity as a priority initiative.

Earlier in 2020, the Federal and Queensland Governments announced that they would proceed with the Gold Coast Light Rail 3a extension to Burleigh Heads.

“The Sydney-Canberra rail connectivity initiative consists of a range of upgrades to the 320km rail line to reduce the current 4 hour train journey time to be competitive with road and air options.

“Given the forecast population increase on this corridor is 1.5 per cent each year to 2036, this initiative would improve transport options immensely.”

“The ARA supports the record investment being made by state and Commonwealth governments into rail. This report highlights the benefits of continuing that investment and that the current levels of infrastructure investment need to be the new norm.”

Need for network of deep water ports along East Coast

Port of Newcastle CEO, Craig Carmody, said that prioritising the development of suitable East Coast deep water container port facilities should come as music to the ears of internationally-trading businesses across the country.

The Priority List highlights the need for “a network of deep water ports” along Australia’s East Coast to accommodate large ships that are currently unable to visit due to port constraints, marking the issue as a “priority initiative”.

Mr Carmody said Infrastructure Australia had correctly identified a major deficiency in the nation’s preparedness for ever-larger ships, noting problems on both the wharfside and the landside.

“The data is clear – shipping lines around the world have stopped building the ships that Australia’s ports are designed to accommodate*,” Mr Carmody said.

“While IA correctly notes that no Australian port can accommodate the larger, more energy-efficient ships carrying more than 14,000 TEUs, it is also critical to examine the constraints to existing road and rail infrastructure in handling the nation’s current and future trade volumes.

“Australia is left unable to reap the benefits of potential cost reductions and efficiency opportunities across the supply chain because its ports are designed for ships that peaked in popularity at a time when Cathy Freeman was winning the Sydney 400m and the Y2K bug was the biggest threat to their operation.

“The world has moved on – ports overseas are now handling ships of more than 20,000 TEU at a time when Australia’s ports celebrate inefficiently accommodating a ship less than half that size, in some cases having to turn the ship around at the berth to reach containers stacked on the opposite side.

“For a nation that moves 98 per cent of its international trade by sea, being unresponsive to these global trends leaves Australia’s competitiveness and consumers disproportionately exposed.” Infrastructure Australia is set to examine the issue, including understanding the challenge of channel deepening at existing ports, development of new port locations and enhanced landside access infrastructure at ports.

It has also flagged the need to examine the option of developing “a container port facility that can accommodate the largest ships as a transhipment port for other destinations within Australia.”

Mr Carmody said Port of Newcastle was ready to build a new 2 million TEU container terminal, subject to the removal of a $100 per TEU penalty that currently applies.

“We continue to pursue productive discussions with all levels of government to achieve an outcome that unlocks $2 billion of private investment in NSW and spawns the significant associated economic benefits for our state,” Mr Carmody said.

The Property Council of Australia said that the 2020 Priority List revealed the scale of the challenge for Australian governments in addressing emerging and enduring infrastructure needs.

Chief Executive of the Property Council, Ken Morrison, said Australia’s infrastructure task was getting bigger and more complex across its fast-growing cities as well as regional areas.

“The Infrastructure Priority List is a huge call to action for our governments to support the city-shaping and nation-building projects that are needed for a growing population, to boost productivity and sustain our standard of living,” Mr Morrison said.

“Governments also need to plan for greater resilience in our infrastructure to respond to the new challenges posed by a changing climate.

“While it is pleasing to see new projects added to the list, there remain a lot of urban rail projects still in project definition stages.

“These projects are absolutely critical to our fast-growing larger cities where most Australians choose to live and to our economic productivity. Governments around the country should accelerate this work.”

Mr Morrison welcomed the new focus areas including water, waste, coastal inundation and road maintenance, as well as the strong focus on building greater resilience to deal with the impacts of a changing climate.

“This is the ‘new normal’ for Australia’s infrastructure challenge, not just a short-term boom,” Mr Morrison said.

“We need to plan for, fund and deliver new infrastructure on a much bigger scale and over a longer period of time than we have experienced previously.

“This will require a new mindset from our governments and the community – one which is always focused on constantly planning and building for the future.”

Mr Morrison noted that while the Infrastructure Priority List continued to grow, only seven projects had ‘graduated’ from the list to project delivery stage.

“We need to see more projects moving into delivery stage if we are going to keep with the demands of a growing nation,” Mr Morrison said. RACV has welcomed its submission for a network of cycling superhighways across Melbourne being listed as a Priority Initiative for 2020.

As part of its work encouraging the Victorian Government and local councils to build safer infrastructure for cyclists, RACV developed a shortlist of 17 strategic cycling corridors across metropolitan Melbourne.

Designed to connect Melburnians to major activity centres like the CBD and surrounds, the 17 RACV identified cycling superhighways include Chapel Street and St Kilda Road, the two highest priority corridors, as well as Napier Street – St Georges Road in the north.

The RACV submission was one of only two new projects in Victoria endorsed as a Priority Initiative in 2020. RACV’s Senior Planner of Mobility Futures, Stuart Outhred, said inclusion in the list demonstrated the importance of this project for Melbourne’s transport landscape.

“We are now calling on all levels of government to work together to heed the call from IA and build cycling infrastructure that will get Melbourne moving again.

“RACV submitted five key transport priorities for Victoria to IA’s Infrastructure Priority List, which focused on preparing the state for the population boom and the associated pressures on the transport network. They included the Metro 2 rail project, safety upgrades on regional roads, as well as road and rail projects in outer Melbourne.”

Mr Outhred said safer bicycle infrastructure for several years would also give commuters greater choice in how they get around the city.

“Investing in these corridors will deliver immense benefits for commuters wanting safer, cheaper and healthier ways of getting around, as well as the added benefits of reducing congestion on roads and pressure on public transport.”

This story will develop as the industry releases its responses to the 2020 Infrastructure Priority List.