A tunnel boring machine has broken through to the other side of O’Shannassy Reservoir in Melbourne, laying the path to replace the reservoir’s existing water outlet pipe with a new one. 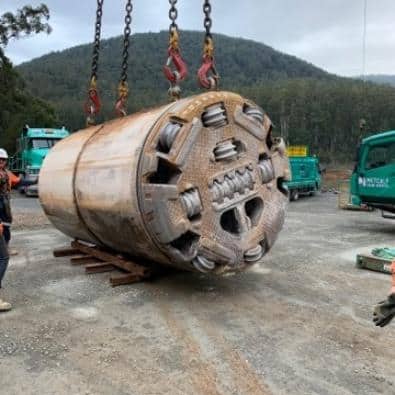 TBM Collette, named after Victoria’s Chief Engineer, Dr Collette Burke, has tunnelled at the reservoir for four-and-a-half months since December 2019.

It has drilled through 425m of earth to prepare for the new pipe’s installation.

The tunnelling was required to navigate through a peak in the catchment, avoiding significant excavation and tree loss. The deepest section was 40m below ground level.

Melbourne Water staff are working with project partners John Holland-KBR Joint Venture to replace the century-old outlet pipe. The project is expected to be completed in the second half of 2020.

This pipe will replace the century-old pipe that supplies water to Silvan Reservoir, the biggest catchment in Melbourne Water’s network.

O’Shannassy Reservoir is a crucial part of Melbourne’s storage reservoirs system. With a high annual yield of 60GL, it provides many Melbourne homes and businesses with drinking water.

Melbourne Water’s Project Manager, Daniel Rodino, is pleased with how the project is progressing as the tunnel boring had been scheduled to be completed by the end of April.

“With tunnelling completed, the project team will now turn their focus on the construction of the new pipeline which will continue to supply Melbourne with clean drinking water for another 100 years.”

“Our team is proud to be designing and building new water infrastructure for Melburnians, now and into the future,” Mr Nestor said.

“Together with Melbourne Water, we believe it is important to create local jobs when working in an area. We have hired several local people to work with us to deliver this essential project, while our team of engineers and supervisors have moved into the region.” Recently, the project team visited pupils at Warburton Primary School, who chose the name of the tunnel boring machine, and they signed a special sticker that will be placed on a section of the new pipe for posterity.