Women on the move at Metro In mid-2019, Metro Trains launched a recruitment campaign aimed at getting more women to apply to become train drivers. After the job advertisements went live, more than 10,200 people applied to be drivers – and almost half of them were women. Metro Trains has an incredibly diverse workforce and is working hard to create gender diversity, so here we take a look at three of the company’s extraordinary female employees.

Metro Trains Melbourne is passionate about ensuring its workforce reflects the passengers and communities it serves every day. Melbourne has one of the most diverse populations in Australia. Metro’s push to encourage and actively recruit for greater diversity is one way it aims to improve its business culture and the network it operates.

When Metro first started operating trains in Melbourne more than a decade ago, just two per cent of train drivers were women. The company took bold and disruptive steps to shift the dial. Metro was granted special dispensation to target women in job advertisements. Today, because of those efforts, 27 per cent of drivers are women.

Three years ago, Jess Thiele was working in the pharmaceutical industry and decided she needed a change of career. She saw Metro’s recruitment campaign calling on more women to apply to become train drivers, and decided to give it a go.

“It’s pretty surreal looking in the mirror and seeing a 160m train behind you and all these people piling onto it, and you’re thinking, ‘I’m responsible for nearly 1,000 people’,” Ms Thiele said. Her first day on the job was an experience forever etched in her mind.

“I remember driving during peak hour and there were hundreds of people on the platform – it was chock-a-block – and they were all staring expectantly at me. I just remember thinking to myself, ‘you guys don’t know it’s my first day’.

“Every day you learn new things and you put it all into practice. It’s never boring.”

Ms Thiele said Metro’s push to have a greater proportion of women in operational roles is critical to the future of the rail industry.

“I think some people might think it’s more of a male-oriented job, which it definitely isn’t. Metro expects women to do exactly the same job as men,” she said.

“My wife has just started as a trainee train driver so she’s currently at the Metro Academy in South Kensington. At home it’s a little crazy at the moment because we have pictures up on the walls of maps and signals.

“Hopefully by December she’ll be qualified and she’ll be out and about and we’ll have another train driver in the family.”

Metro’s Head of Rolling Stock Engineering, Amy Lezala, said she has never been discriminated against for her gender while working in the rail industry. In her personal experience, women are given the same respect and acceptance as men, but more women need to know that the rail industry is available to them as a career path.

“I’m an engineer first and a woman second. My peers and I work as engineers together, irrelevant of gender,” Ms Lezala said.

“For young women looking to get a job in rail, I’d really encourage them to join this industry. It’s a very welcoming place where you can have a very fulfilling career.”

Ms Lezala said it’s important to adopt a skills-first approach, and while it’s essential that the rail industry diversifies and employs more women, people need to be recruited because of their ability.

“We’ve got a proudly diverse culture in Melbourne, and we need to make sure that our business reflects this in the best possible way.”

In the decade Metro has been operating the rail network in Melbourne, its workforce has doubled from 3,000 to 6,000 people. Over that time, female representation has increased from eight per cent to 26.5 per cent, and is constantly growing.

In the past 18 months alone, the number of women working across Metro has risen by nearly five per cent. Metro has a target of reaching 40 per cent of women in its workforce by 2027, and as of March 2020, three of CEO Raymond O’Flaherty’s seven direct reports are women. 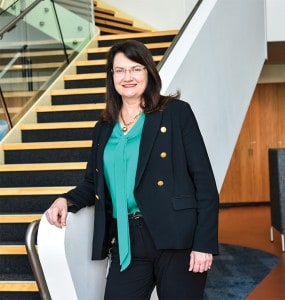 Metro’s Chief Operating Officer, Catherine Baxter, has dedicated 30 years of her working life to the rail industry. Starting at Queensland Rail, Ms Baxter worked her way up the ranks before landing a role in charge of operating one of the country’s busiest rail networks.

“Towards the end of the 1980s and into the early 1990s, we started to see more women become ambitious and move through larger companies, and that rubbed off on the rail industry too.”

As a senior leader at Metro, Catherine is passionate about providing more roles for women in all parts of the business – and for more women to become role models to others. She is calling on any woman who is interested in pursuing rail as a career to give it their best shot.

“It’s a fantastic industry to be in, and it really gets in your blood. Once you’re in the rail business, it’s very hard to leave and it offers fantastic career opportunities,” Ms Baxter said.

“You need to work hard, you need to invest in yourself, you need to be prepared to learn and to study – but there are massive opportunities.”