Extreme heat kills more Australians than any other natural disaster and the number of extreme heat days is predicted to increase significantly for many areas of Australia. Climate-KIC Australia in partnership with the City of Adelaide (CoA) and South Australian Department for Environment and Water, are undertaking the Cool Road Adelaide project to test three heat reflective seal coats that may help combat urban heat now and in the future.

For the CBD and eastern Adelaide in South Australia, projections are:

The urban heat island effect is prevalent in many Australian cities and has been shown to be exacerbated by climate change.

Due to urban ambient air temperatures being related to land surface temperatures, in 2018 the Resilient East climate change partnership (eight councils in central-eastern Adelaide plus the Government of South Australia), along with the City of Salisbury, commissioned The Collaborative Heat Mapping for the Eastern and Northern Adelaide Project.

Graph 1 was taken from this study and depicts the average land surface temperatures of 1,100 locations across the study area, within 18 different land use type categories.

A key finding from the study was that non-shaded asphalt roads are 4oC hotter than the average land surface day temperature, and they bank the heat and release it at night, becoming the hottest night-time surface.

The study findings are consistent with national and international research and the related map can be viewed along with those of greater Adelaide on the Urban Heat Mapping Viewer portal.

The City of Adelaide (CoA) is using this data to inform its planning and design. Residents and businesses can consult the tool to understand how heat exposed their properties and communities are.

The CoA is responding to the predictions for climate change and knowledge of urban heat in a number of ways, such as developing a Climate Risk Profile, a Water Sensitive City Transition Plan, staff and community capacity building, increased greening, investigating more sustainable infrastructure renewals, and trialling cooler materials and infrastructure in the city. 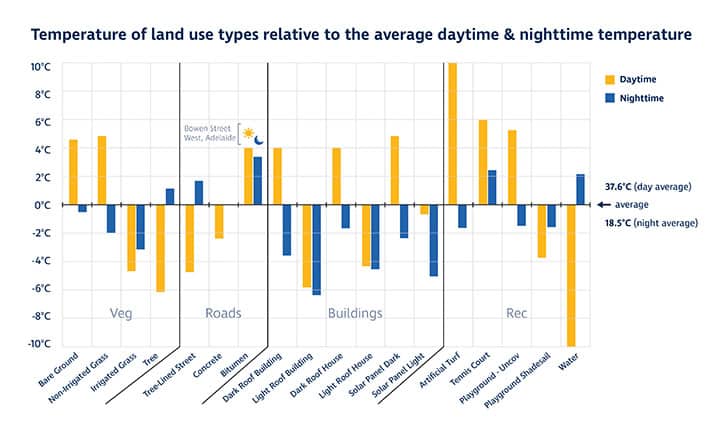 There’s a range of cool materials being used, trialled and developed, which include low heat conductivity (conducts heat less into its interior), low heat capacity (stores less heat in its volume), high solar reflectance (albedo) and a high level of embodied moisture to be evaporated or filtrated into the soil.

Asphalt roads, one of the consistently hot urban surfaces both day and night, cover a large area of our cities and are a local and state government asset.

As an example, the Tokyo Metropolitan Government has implemented 19km of water retentive pavements as an urban cooling strategy.

The Cool Road Adelaide Project is  trialling all three of the aforementioned cool road seal coats on the same piece of road, and has tested both land surface and air temperature.

The aim of the trial is to understand the advantages and disadvantages (from an urban heat, road preservation and community perception point of view) of the type of product overall, and comparing the three products to each other and a control patch.

Bowen Street West was chosen as an existing asphalt road, receiving a reasonably uniform heat profile, contributing to a night-time heat island (125m x 125m area) and a location site which would cause minimal impact to residents and traders within the CBD.

The road is approximately 100m long, 11.5m wide and the road surface is over 20 years old.

The project patched potholed and cracked sections of the road approximately three months before the cool road surfaces were applied, conducted slip resistance (AS 4663:2013 and AS 4586:2013) and skid resistance (DPTI TP345:2-10) testing, and established a community information and consultation process.

The project conducted pre-application road temperature testing via a ground- based measurement platform in mid-December 2019 (after two days over 32oC with clear skies) at both midday and early morning, to gather day and night-time temperatures.

The three products under trial are:

♦ JetBlocTM in Irish Cream by Fulton Hogan – a blend of epoxy modified and cementitious polymers that can be formulated in many colours including the most heat reflective Irish Cream option. It’s designed for high traffic and stressed asphalt pavements and can be sprayed on or hand applied

♦ JetCoolTM by Fulton Hogan – a premium bitumen emulsion with latex and sun reflective fillers which make it a light grey colour. It’s designed for asphalt roads and airport pavements, and can be sprayed on or hand applied

♦ CoolSeal by GuardTop® supplied by SuperSealing – a grey colour, water-based asphalt emulsion. It has been used extensively in Los Angeles, as well as other US cities 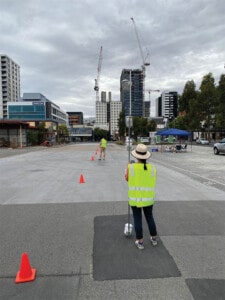 The post-application temperature measurement occurred in February and March 2020 consisting of:

♦ Ground-based measurement of the entire road surface after two clear sky days over 32oC. An average surface temperature and relative temperature values for over 100 individual points will be calculated and summary statistics provided

A report will be provided in July/August 2020 regarding the land surface and air temperature findings as well as the results of the community consultation.

Heat reflectance qualities of materials will need to be considered on a case-by-case basis in different locations.

Research is indicating these surfaces may be most useful on roads that are not abutted by high buildings.

In highly built-up areas, the road may reflect heat onto surrounding buildings that absorb the heat, increasing the heat load of the building and/or reflecting the heat back into the street.

Depending on the scenario and location, seasonal shading, misting, greening (particularly with canopy) and/or permeable pavements may be more effective at cooling a microclimate.

Project findings will be published on the Infrastructure website when released. 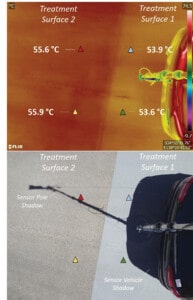