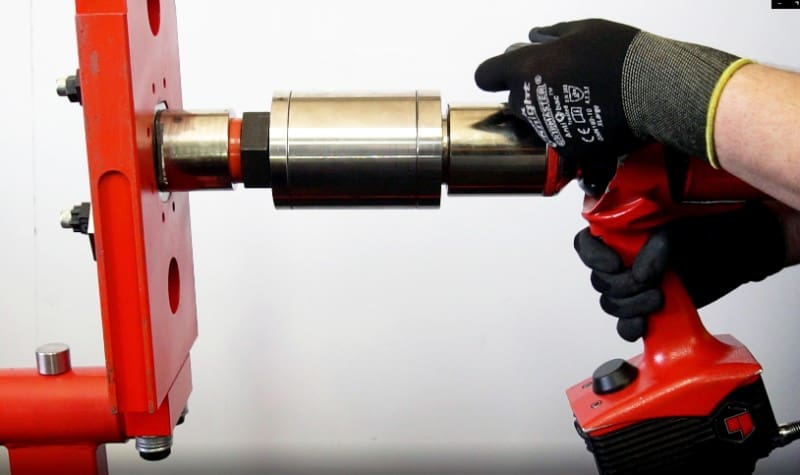 A new fastening system for the application and removal of heavy duty nuts is set to revolutionise Ground Engaging Tool (GET) maintenance by significantly improving safety and productivity.

The system, known as Segnut FIRST (Fully Internalised Reaction Socket Technology), has been developed by Western Australia based company Segnut in response to the ongoing risk faced by mobile plant maintenance teams when installing and removing nuts from equipment such as dozer blades.

GETs are subject to high levels of vibration, impact, erosion, and damage because of the nature of work being performed. This means the retaining bolts must be applied with high torques that cannot be achieved by manual means.

Typically, this is done using powered torque multipliers (nutrunners) or impact wrenches (rattle guns) Each comes with its own set of safety hazards.

Segnut FIRST has been designed as a safer, faster alternative to these conventional nut installation and removal methods. It follows Segnut’s successful development and production of its innovative, patented fastener – the Segnut – and works together with the fastener to provide a complete solution.

Engineered as a safer, rapid release alternative to the standard industrial nut, the Segnut is comprised of three inner-nut segments held in place by an outer retaining sleeve.

When the Segnut needs to be released from the bolt, the outer sleeve is rotated to a “release”, allowing the segments to separate away from the bolt thread, even when the thread is damaged or seized.

Its application in mining and quarrying GETs has proven the Segnut’s ability to improve maintenance productivity and safety. The fast removal of the Segnut reduces equipment downtime. It eliminates the need for hot work permits or exclusion zones and requires less torque to remove them.

The Segnut has also proven its safety benefits. There is less exposure to hand-arm vibration, hand injuries and noise from rattle gun use, and it reduces fatigue and trip hazards due to oxy-acetylene hoses.

The Segnut FIRST system goes even further to improve the safety and efficiency of GET maintenance by addressing nut installation risks.

The system facilitates both the installation and removal of Segnuts using a modified torque multiplier – the preferred tool for nut installation.

It incorporates a reaction socket with a dual drive mechanism which attaches to the modified end on the plow bolt, and inner Segnut segments for installation – the sockets are counter-rotated against each other to cancel any external torque reactions.

Another larger reaction socket with a dual drive mechanism attaches to the inner and outer Segnut sections for removal. Again, the sockets are counter-rotated against each other to cancel any external torque reactions.

The system removes the need for a reaction bar, eliminating the risk of finger crush, vibration injuries and hand lacerations during install and removal.

The use of torque multiplier-type tools allows for accurate, quiet and efficient bolt tensioning – a must for achieving joint integrity. The faster set-up and nut removal improves equipment availability.

Segnut FIRST is currently being trialled by one of the world’s largest mining companies following a successful trial of Segnut. Segnut FIRST system is also being tested for fixed plant applications.

Tom Baskovich, Director of Product Development at Segnut, said, “The Segnut FIRST system has the potential to benefit any industry that uses nuts that need to be replaced frequently due to significant wear and tear.

“We know that applying and removing the fasteners on industrial equipment using conventional methods is a hazardous activity because of the risk associated with the current tools and practices.

This partner content was brought to you by Segnut. To trial Segnut and the Segnut FIRST system, click here.