How the rail industry is driving a post-COVID economy There has been a lot written about how the pandemic has brought out the best in the human condition, but not as many column inches have been devoted to how business has stepped up to the plate in its own way.

There has not been one corner of the country untouched by the COVID-19 crisis. For some businesses the pandemic has been the second or third extremely difficult situation they have found themselves facing this year.

It is fair to say 2020 has been a truly difficult experience for us all – personally, professionally and socially, with few exceptions, and business has certainly done its fair share of heavy lifting.

Banks bought in early with mortgage holidays and interest free periods. Insurance companies froze premium increases. And, with the support of governments, infrastructure companies helped not only to fast-forward projects where possible, but to stimulate investment and create jobs for their contractors and their staff.

Protecting infrastructure jobs and skills, and the people who have them, is in everyone’s interest and it applies particularly to regional Australia – where many areas have been amongst the hardest hit – following years of devastating drought, bushfires and floods.

No one had foreseen a global pandemic and the unprecedented impacts on businesses, employment and confidence that it would have. 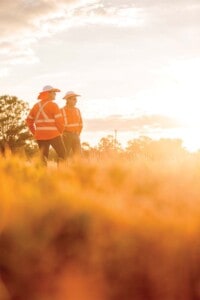 The Australian Government has done its part to help with record stimulus packages such as JobKeeper and JobSeeker to support Australians through the immediate crisis. But it falls to Australian businesses to help the country build our way out of the recession.

Just like the Sydney Harbour Bridge and Snowy Mountains scheme were both essential components of the government’s post-war strategy in the 1920s and 1950s respectively, so are mega infrastructure projects to support the post-COVID recovery today.

The Australian Rail Track Corporation is immensely proud of the role we’re playing in the nation’s economic response to the COVID-19 crisis, and also very aware of our commitments and responsibilities to the regional communities that we are a part of.

Three years ago, we were tasked with a project of national significance – to build a more direct freight link between Melbourne and Brisbane to unlock freight transit time of less than 24 hours.

Inland Rail is a world-class project that is delivering enormous economic and social benefits to our country at a time when we need it most.

It will complete the backbone of our freight rail network, it will help businesses move freight safer, faster and cheaper. It will reduce our reliance on busy roads and highways. It will continue to create thousands of jobs for years to come.

Ultimately, it will reinvigorate regional Australia while bolstering our national economy. We have already created more than 1,800 jobs in the construction of Inland Rail, including 762 in regional areas where they are needed badly.

This is just the beginning of the Inland Rail evolution. These jobs have been created while we have completed 103km of what will be a 1,700km rail line.

Over the breadth of the project we expect to create more than 16,000 jobs during the construction of Inland Rail, while another 700 workers will be needed for sustainable, long-term jobs when it becomes operational.

At this critical juncture in our recovery from COVID-19, we are doing our best to bring forward projects and accelerate construction in those areas that we can.

We are working with our suppliers and subcontractors to keep supply chains moving in the face of difficult circumstances surrounding border controls. This is an environment in which we operate every day as we help facilitate the movement of freight around the country.

And we are using significant amounts of Australian-made steel, concrete and ballast in our big build, backing Australian jobs, manufacturing and businesses.

Inland Rail is truly a national project. It is being made for Australians, by Australians and we are using Aussie goods and know-how to get the job done.

In New South Wales, we’ve already sourced more than 14,000 tonnes of steel rail from Whyalla, 200,000 concrete sleepers from Mittagong, almost 400,000 tonnes of ballast from Parkes, a similar number of new rail clips from Blacktown and close to 27,000 tonnes of precast culverts from Tamworth.

It is staggering to think we’ve only completed just six per cent (103km) of track of the Inland Rail. Just ask the people of Parkes where the project has started about the effect it has had on the regional economy, and the buzz and excitement it has created in the town.

We expect this ripple effect to be felt right along the alignment and the next section between Narrabri and North Star is focusing national attention on the centres of Moree and Narrabri. What is exciting is the prospect of what may be yet to come. Private investment is already happening in several sections along the alignment and promises a long-term renaissance for regional Australia.

A $35 million freight terminal has been built in Parkes on the back of Inland Rail, and hundreds of millions more is expected to be unlocked through Inland Rail construction.

We have other major projects underway that will also boost our transport future and create jobs now when they are most needed.

The North East Rail Line upgrade in Victoria, for example, has seen more than $70 million invested into the regional economy by the project in its first year of major construction.

More than 173 Victorian subcontractors and suppliers of goods and services have benefited – including 85 businesses in local North East Victoria.

Everything from local equipment hire, to accommodation, to fuel purchase, to materials like ballast and asphalt providers. Another $28 million will see new Australian-made rail laid in the Southern Highlands of NSW.

These are only some examples of the dozens of projects we have underway right across the country – investing in local people and business whilst creating a safer, reliable and more resilient transport network for our future.

By creating a reliable transport network, we will allow manufacturers to set up shop at competitive locations anywhere on the line between Melbourne and Brisbane, but also as far as the project is connected to Perth and Adelaide and regional centres like Wodonga, Toowoomba or Narrabri.

The Australian Government through ARTC is investing billions in this project, but the value of backing business and keeping the Australian economy moving in these very difficult times is simply priceless.