Road planners have talked about “missing links” for decades. Like that other cliché to describe big infrastructure – “game changer” – it can sound impressive but mean very little to motorists stuck in traffic. But if there ever was a motorway you could confidently call both a “missing link” and a “game changer”, it’s NorthConnex, which will connect Sydney’s M1 and M2 via 9km twin motorway tunnels.

One of Australia’s longest road tunnels and the deepest at 90m, NorthConnex will revolutionise the way people and freight move by finally filling the gap in the National Highway route and providing an alternative to the notorious Pennant Hills Road.

Why it’s a game changer

Winding through some of Sydney’s leafy outer north-west suburbs, you don’t have to look far to find a story about Pennant Hills Road traffic incidents.

Home to around ten schools, aged care homes, houses and shops, local traffic is forced to share Pennant Hills Road with heavy vehicles, freight and through traffic as it is the only direct route between the M1 and M2.

It is used by around 80,000 vehicles per day making it one of Sydney’s most congested roads, and regularly voted by drivers as one of the worst.

Don’t cry over it, but 2,000 bottles of milk were spilt after an incident at Normanhurst in 2017, while local Federal MP Julian Leeser had a truck smash into his Pennant Hills office building in 2018.

There are an average of 360 incidents a year – around one per day, impacting traffic and causing frustrating delays. In the past six years there have been around 600 crashes, with three people killed and another 424 injured.

One in four crashes involved a heavy vehicle, compared to one in 14 across Sydney. 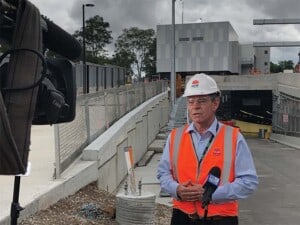 Here’s where the game will change with NorthConnex

When the tunnel opens, it will take up to 5,000 trucks a day off Pennant Hills Road, returning local streets to local communities, improving safety and easing congestion to get people where they need to be sooner.

NorthConnex will also provide a safer and more efficient journey for trucks, enabling them to travel in taller, wider tunnels designed with grades favourable for heavy vehicle movements.

It will boost state and national economies by providing more reliable journeys and shorter travel times for freight, opening up access and opportunities for areas like the Central Coast.

Linking the M1 and M2

NorthConnex will deliver traffic-light free journeys between Newcastle and Melbourne. Since the 1920s, there have been calls for a ‘Great Northern Roadway’, progressed in the ‘40s in the fabled County of Cumberland Plan.

After many false starts, it wasn’t until 2014, after an unsolicited proposal lodged two years earlier by Transurban, that the project was given the green light by the Australian and NSW Governments.

Alleviating congestion and improving safety on Pennant Hills Road has been something the local community has been wanting for years, and they’re excited that relief is just around the corner.

The twin tunnels will help create significant efficiencies in freight movements along the east coast, with predicted economic benefits of $4 billion.

Instead of trucks negotiating the twists and turns of Pennant Hills Road, two school zones and up to 21 sets of traffic lights, NorthConnex will provide a direct underground trip which will result in travel time savings of up to 15 minutes.

The tunnels have the capacity for around 100,000 vehicles a day and feature lighting displays of stars and trees to keep drivers alert, among the first of their kind in the world.

It has taken five years of complex construction underneath three railway lines, excavating 2.3 million cubic metres of spoil. Around 8,700 jobs have been created over the lifetime of the project. The $3 billion tunnel is being delivered by the Australian and NSW Governments in partnership with Transurban. The construction contractor is a joint venture between Lendlease and Bouygues, and it’s an engineering marvel.

Led by 20 roadheaders and two surface miners, work involved carving through about 21km of mainline tunnels. Three specially designed vertical conveyers, located at each of the three tunnelling shafts, were used to transport excavated spoil to the surface.

The roadheaders used on the NorthConnex project were designed and built by Sandvik and Mitsui. Each roadheader weighed around 100 tonnes and ‘chewed’ through roughly 25 five metres of rock per week.

More than one million cubic metres of the spoil was sustainably reused to partially fill the nearby Hornsby Quarry, laying the foundations to transform the site into a future parkland for the local community.

In an Australian first, conveyors reaching 160m in length were used to transport the spoil into the quarry, at a rate of up to 2,000 tonnes of spoil per hour.

This process helped to significantly reduce truck movements in the local area and minimised impact on the surrounding environment. The main type of primary tunnel supports on the project consist of a thin layer of shotcrete and rock bolts.

Approximately 300,000 rock bolts up to five metres in length have been installed to support the tunnel’s structure. Other statistics include:

NorthConnex has been designed to the highest safety standards, and built and fitted with the latest technology, making it one of the safest motorways in NSW.

It features highly intelligent and coordinated monitoring systems which continually check tunnel operations to detect any issues that may impact tunnel performance such as traffic volumes and speeds, incidents, smoke and overheight vehicles.

The 24/7 operations team will have access to around 850 cameras as well as stopped vehicle detection cameras to alert of potential incidents.

Transurban’s NorthConnex Project Director, Daniel Banovic, said, “We are working closely with our project partners to open as soon as possible so motorists can test-drive Sydney’s latest tunnels for themselves.”