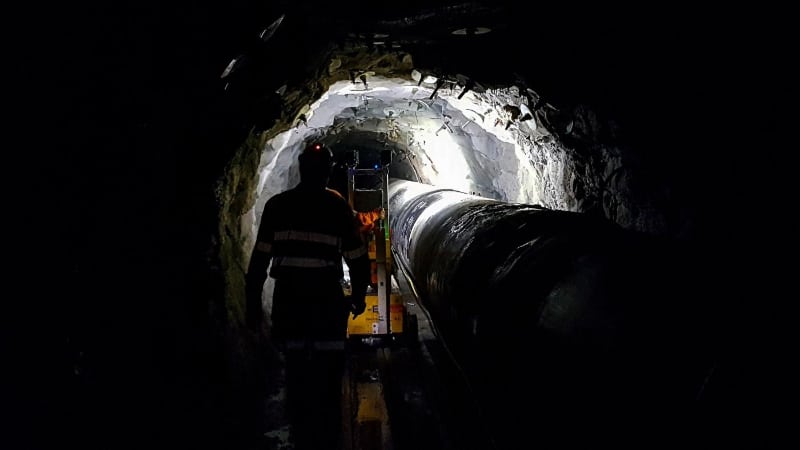 A Seqwater project to safeguard a bulk water pipeline has reached a critical landmark, with more than 60 metric tonnes of rock and soil chipped away and removed from an underground tunnel.

The 2.5km tunnel, located beneath the Blackall Range, houses a pipeline that transports water from Baroon Pocket Dam to the Landers Shute Water Treatment Plant in Palmwoods.

Seqwater Asset Engineer, Daniel Roche, said inspections of the tunnel, carried out by geotechnical and civil engineers, found a number of loose and cracked rocks that threatened to fall and damage the pipeline.

Mr Roche said the tunnel had been excavated through sandstone using drill and blast techniques in the 1980s and had deteriorated over time due to natural weathering.

“The work called for a lot of preparation as it was quite high risk; the tunnel is about 2.6m high and 2.5m wide and gets pitch black after venturing 50m or so inside, with the added risk of rock falling during the work,” Mr Roche said.

Seqwater Dam, Recreation and Catchment Operations Coordinator, Phil Benson, who helped coordinate the project, said Seqwater worked with contractors from engineering consultancy SMEC and tunnelling company Abergeldie to identify all the rock that needed to be removed and safely carry out the excavation.

Mr Benson said contractors worked in small teams to manually remove the rock using pry bars, then loaded the rock into a small cart fixed to a rail to transport it out of the tunnel.

“The cart could load about half a tonne of rock at a time,” Mr Benson said.

“Of course, the further into the tunnel the work progressed the longer the round trip became to remove the rock.

“As the project neared completion, the team was having to walk more than two kilometres into the tunnel to excavate the rock, load the cart and head back.

“Another obstacle was how restricted the tunnel was with the pipeline running through it – the teams often had to work on their hands and knees to pry away the rock.

“Providing power for the work to take place, maintaining communication with the team in the tunnel and working during wet weather – all provided additional challenges we had to overcome.”

Mr Roche said advances in technology had helped make it easier to detect potential issues in the tunnel and solve them before they had much impact.

“For example, we can now use laser scanning to create a 3D model of the tunnel which helps identify and record any cracks appearing in the tunnel that might not have been there before or movement within the rock,” Mr Roche said.

“In order to maintain this critical link, regular inspections and repairs will be carried out in the tunnel, to ensure it remains a safe environment to access and work in, with minimal risk of damage to the pipeline.”

The pipeline is not only important for the Sunshine Coast; it’s also a critical component in South East Queensland’s Water Grid with the ability to transport 180 megalitres of water from the Baroon Pocket Dam to the Landers Shute Water Treatment Plant.