From condition monitoring on remote assets to mapping the spread of bushfires, drones have had a significant impact on many sectors in recent years, including infrastructure. But the technology has even more potential for the future, including a predicted economic boost of $14.5 billion in GDP for Australia and the creation of 5,500 full-time jobs each year, over the next 20 years.

These figures come from a recent Deloitte Access Economics report, commissioned by the Federal Government, which investigated the economic benefit of drones in Australia, from growth of the drone industry itself, to the cost savings and productivity benefits it can provide to other sectors, including construction and transport.

The report quantifies the potential benefits and savings broader drone use could have for the nation’s economy over five, ten and 20 year periods. The key findings from the report include:

The report finds the economic potential of drones is estimated to be significant across Australia’s states and territories as well as major cities.

These predictions are based on a scenario-based economic modelling approach, which outlines what could happen in the future so industry and government can be aware of risks and opportunities.

In addition to this report, the Australian Government is also planning to work with industry to develop and implement a National Emerging Aviation Technologies Policy. This policy will support the development, jobs and growth of the emerging aviation sector, including drones and aerial taxis.

The popularity of drones in the market began around 2015, and since then the technology has continued to improve and become more accessible. For many sectors, commercial drone applications are still in the early to middle stages of development which suggests significant potential for the future.

There are a number of current and future uses for these technologies across multiple industries in Australia that can save time and money, and increase worker safety. Current uses of drone technology include:

Inspections across the infrastructure sector, including on powerlines, bridges and rail assets.

Direct warfare and surveillance activities. These industry uses are already in place to an extent, but there is still significant potential in these sectors to use the technology to its full potential. Then there are the areas that have been identified as compelling future use cases, which could be seen from around the late 2020s. These uses include the areas of:

Including airport taxi trips, other taxis and inter-city trips.

Predicted growth of the drone industry has the potential to create new opportunities by automating production processes, leading to cost savings over the medium to long term. The creation and widespread adoption of new transport services such as urban/regional air mobility and e-commerce/delivery services also shows enormous potential.

The Deloitte Access Economics report found that these passenger and delivery drones, and other Lower Level Airspace (LLAS) vehicles, have the potential to address today’s industry challenges such as road congestion, improved logistics, and to generate new products, services and markets.

In rural areas of Australia, LLAS is already being used by mining companies, and is expected to offer greater operational efficiency in agriculture and to improve deliveries and services to those remote areas. Many new possible applications, particularly in agriculture, infrastructure, security, transport, media and entertainment, telecommunications, mining, and insurance have been recently achieved through significant progress in technological capabilities and regulatory accommodation.

Drones in the construction sector

Some infrastructure companies have been implementing drones for a few years now because of the efficiency gains and reduction in labour costs. In construction, drones are helping operators to survey, map and deliver accurate measurements, and conduct remote condition monitoring and inspections.

Drones can help project managers and designers eliminate risk and identify potential problems through the use of drone maps and 3D models on job sites.

The construction industry has historically been the fastest growing commercial adopter of drones ahead of mining and agriculture. Drone uptake will increase as the technology improves and drones are able to better analyse the data they collect.

Looking to the future, Deloitte Access Economics found that the ability to quickly render 3D maps of terrain could be essential to get the most out of drones. High-resolution cameras and data processors will need to be able to survey landscapes at 1mm per pixel.

Drones will need improved ‘surveyor grade’ global positioning satellite systems that are better georeferenced so the internal coordinate system of a digital map or aerial photo can be related to a ground system of geographic coordinates.

Deloitte Access Economics estimated that there were approximately 3,715 survey and mapping businesses in Australia in 2019. ABS innovation data¹ highlighted that 15.5 per cent of businesses in construction introduced a new or significantly improved operational process.

Based on this relationship, the number of businesses using drones in a construction-related activity could be 580 businesses across Australia.

Total market potential is estimated to be in the order of 38,500 drone units. The adoption curve for construction businesses is broadly reflective of the early automobile adoption curve with an adjustment to reduce growth under all scenarios.

When it comes to the cost-savings predictions that drones could provide the construction sector, it was found that the use of drones in the industry could result in labour cost savings between $130 million to $310 million in 2040 in the low to high uptake scenarios, which is in addition to the increased safety benefits.

These predicted cost savings come from drones being used to substitute existing labour intensive processes in construction such as surveying and inspections. In practice, builders can use drones to collect real-time data about projects and understand on-site conditions to track progress, as well as helping to catch problems before project timelines are delayed. 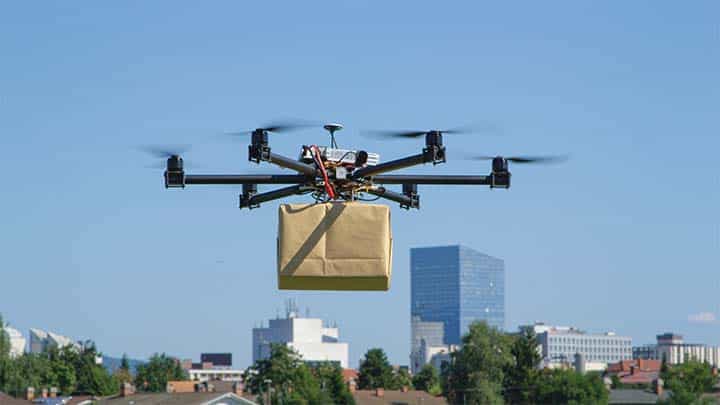 When it comes to mobility and transport, there are two potential ways drones could be implemented in the future, with technology currently in the works, these are: Urban Air Mobility (UAM) – an alternative mode of passenger transport in the form of aerial, vertical take-off and landing (VTOL) and eVTOL passenger drones; and e-commerce and drone deliveries.

Urban Air Mobility (UAM) is still in the early stages of its technology lifecycle, with some global companies designing prototypes and undertaking trials.

Some of the uses for UAM include airport transfers where passengers use drone technology to journey to and from major airports and central business districts, as well as point-to-point transfers where passengers use drones to journey between infrastructure nodes, which are likely to be located in high population density regions such as inner city/urban hubs.

Deloitte Access Economics found that there are varying viewpoints on the potential year of introduction and adoption paths for this technology. In line with the opinion of those entities consulted, including CASA and AA, its report assumes early introduction in controlled areas between 2023-2025 with more widespread adoption not occurring till later in the decade (around 2030).

The main barriers to the adoption of UAM include physical infrastructure (where they would land) and networks (the need for high speed/low latency networks, effective crash avoidance systems, capacity in electricity grids etc.). The market benefits for UAM are represented by the travel time savings accruing to business passengers.

Cumulatively, travel time savings over the period 2020 to 2040 amount to around $24-$453 million under the various scenarios.

An implementation that’s more likely to occur in the next few years is the use of the technology to deliver goods using automated drones to carry packages from a distribution hub to a drop-off location.

Deloitte Access Economics’ report looked specifically at three types of e-commerce and drone deliveries including express parcels to complete the ‘last leg’ of a delivery; food deliveries; and pathology deliveries of samples from local medical centres to hospitals and testing labs.

The report predicts that Australia’s relatively fast adoption of new technologies and the geographical spread of cities could be a catalyst for a relatively fast uptake of this technology, with early adoption already occurring and more widespread use predicted over the next 2-3 years (around 2023).

Express parcel deliveries offer the greatest opportunity for cost savings on a per delivery basis (around $205 to $340 million in cost savings in 2040), followed by food (around $80 to $110 million) and pathology (around $35 to $75 million).

Relatively low upfront capital and operating costs (including labour costs) lend themselves to sizable cost savings. You can already see some real-life examples of this type of utilisation with Amazon running Amazon Prime Air, which seeks to automate last-mile delivery of packages using small drones, as well as Swiss Post, Matternet and Posti who have been testing parcel deliveries by UAV since 2015.

Drones are currently implemented in the public sector for a number of uses including disaster management and recovery, firefighting, and monitoring/inspection of infrastructure. If there are fires, drones can be used to detect the locations, and thermal imaging cameras can see through smoke and assist first responders to deploy assets efficiently.

Post-disaster, drones can be used to survey or map scenes to assess damages, or even to search for missing people. They can also be used in other areas such as police, customs or border control e.g. mapping cities for disaster management efforts, monitoring ports and patrolling coastline.

Drones offer significant cost, efficiency and safety benefits as these activities are typically labour intensive. Drones are already in use throughout Australia for government services, for example in Western Australia, drones were used by the state police force to deliver public announcements at public spaces to assist in enforcing COVID-19 rules.

Widespread adoption to 2030 is supported across Australia in terms of civil government applications that are less subject to infrastructure and telecommunication network limitations.

Use in government services has the potential to achieve labour cost savings between $85-$325 million in 2040. As many of the drone use cases for government services involve surveillance and mapping, labour cost savings are assumed to be comparable with those in the construction and mining industries at around 30 per cent over the case without drones.

For more information, or to read the full report Economic Benefit Analysis of Drones to Australia, visit www.infrastructure.gov.au/aviation/drones/.