The location of the new station in Pakenham East, Victoria, has been revealed, paving the way for the removal of three more level crossings in the area and the extension of the rail line to the new suburb.

The new station will be built between Deep Creek and the Princes Freeway. 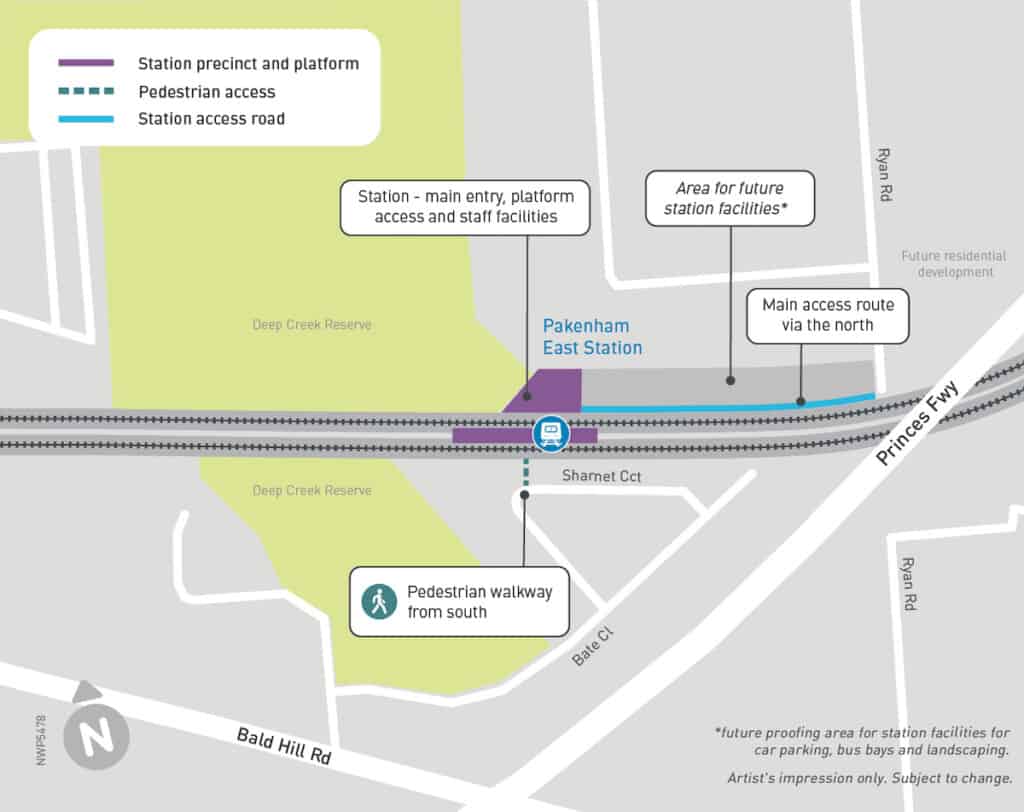 The fast-tracked project will deliver better transport connections for the growing Pakenham community– with the suburb to be completely boom gate-free in 2023/24.

The rail line will be elevated through Pakenham to remove three dangerous and congested crossings – including the notorious McGregor Road boom gates that disrupt the vital north-south connection through the heart of Pakenham, as well as Main Street and Racecourse Road.

As part of the Victorian Government’s $15 billion investment along the line, the project will cater to Pakenham’s growth to the east, extending the metropolitan rail line by 2km, and delivering new stations at Pakenham and Pakenham East.

The new station will benefit both suburban train passengers and those travelling onto Gippsland, removing a major bottleneck where V/Line and Metro trains are currently required to merge onto the same tracks – with separate Metro turnback tracks and dedicated V/Line tracks to be built, avoiding congestion and improving train reliability.

Melbourne’s newest suburb in Pakenham East will feature 7,200 new homes, creating 1,300 new jobs and adding more than $1 billion to the Victorian economy over the coming years.

While the project paves the way for more reliable services and future-proofs the new suburb, it will also mean a small number of property acquisitions – and the Victorian Government said the project team is working closely with owners and residents throughout this process.

In December 2020, 100 locals submitted their ideas for the rail project – with the vast majority saying they’d like to see improved traffic flow and safety and better connections between shops, parks and public transport in and around Pakenham.

The next stage of community consultation will begin later in 2021, as early works on the level crossing removals begin, with locals encouraged to have their say on the look and feel of the new station precincts.

The three level crossings are set to be removed in 2023/24 and the new stations open in 2024 – alongside the recently removed Cardinia Road crossing, they are four of 17 crossings to be removed along the Pakenham line.